But, inevitably, these holes are also hot spots for double-digit scores. Here are the 100 Best Par-5s you will find in Australia, according to votes from our Top-100 Courses judging panel.

The 5th at New South Wales (pictured above) offers players a memorable panoramic view of the ocean. The test is to hit your tee shot onto the plateau landing area of the hill that divides this hole in half. Be sure to avoid out-of-bounds left and the steep drop-off sandy wasteland right of the landing area. Downwind this hole can be a pushover but into any strength breeze, drives can drop short of the hill and you are left with a blind shot from a ‘rocket launcher’ lie.

Having been eased into the round, you stand on the 3rd tee and quickly realise the challenge has been ramped up. This is one tough three-shotter. Its narrow, long and when the wind is in the face, it doubles in difficulty. Miss the dogleg fairway left into thick scrub here and you can reload, where a miss right will leave you pitching out from the trees. The lay up here requires thought as the right-to-left slope of the fairway can feed shots into two fairway bunkers about 40 metres short of the putting surface.

A relatively new hole at Bonnie Doon, coming into play as part of the last stage of works overseen by the OCCM design team. And what a gem it is. The tee shot requires some caution with out-of-bounds left and fairway bunkers to the right. The second and third shots into the elevated green are equally as demanding with a narrow entry to the green lined with bunkers.

A well-protected tee shot awaits with out-of-bounds right and dense shrubs hugging the left of the fairway. For the longer hitters looking at hitting the green in two blows, they will need to carry sandy waste areas flanking the inside edge of the dogleg left. A lay up here is into a very generous landing area. Perhaps the best known and most photographed hole at Bonville. The tee shot is played uphill to the crest, at which point the fairway turns slightly left and descends to a water hazard, separating the end of the fairway from the green complex laying in front of the iconic clubhouse. The approach into the tiered and angled green is always from a downhill lie, adding some spice to the shot.

The recent Tom Doak-redesign has raised the bar on the par-5s at Concord with this being the best of them. There are no fairway bunkers on this reachable par-5, but the shapely green complex is protected by a creek short and wraps around the left, while there are two bunkers right. Those laying up must get as far down as possible to leave a short approach.

A narrow driving hole that has been made even tighter in recent years with a tweak in the shaping of the fairway bunkers, but these only really come into play for longer hitters seeking to reach the green in two shots. The two-tiered green is protected by three bunkers but it is the water right and left that can be troublesome.

On a course designed to be tough, you can imagine how difficult the longest hole on the layout might be. Your drive is played to a hillside fairway that cambers dramatically from right-to-left. This brings a nest of bunkers into play but can be easily avoided due to the generous width of the fairway. But the closer you get to the green, the narrower the playing line gets before turning sharply left – around a crop of trees – to the green, found just beyond a small creek. Often played into the prevailing southerly, this par-5 plays all of its 523 metres. No hole at Magenta runs as close to the beach as the lengthy hole sweeps right between grass-covered dunes right and seaside scrub left. A bunker in the middle of the fairway asks you to decide to go left or right, with each route having its benefits and pitfalls. The lay-up here is best from the left half of the fairway to avoid hitting over the greenside bunkers.

A beautiful par-5 that rollercoasters across the side of a hill with tall timbers lining both sides of the fairway. The tee shot is played uphill to the crest, with longer hitters able to find the downslope of the dogleg right. A creek cutting in front of the putting surface adds risk to going for the green in two shots – a tough shot at any time from a downhill lie.

The 16th is a tight three-shotter where the driving zone is bordered by water left and sand to the right. The final approach to the green is a highlight, with four huge red sandy bunkers ringing the putting surface, which has a dramatic slope off the front edge. 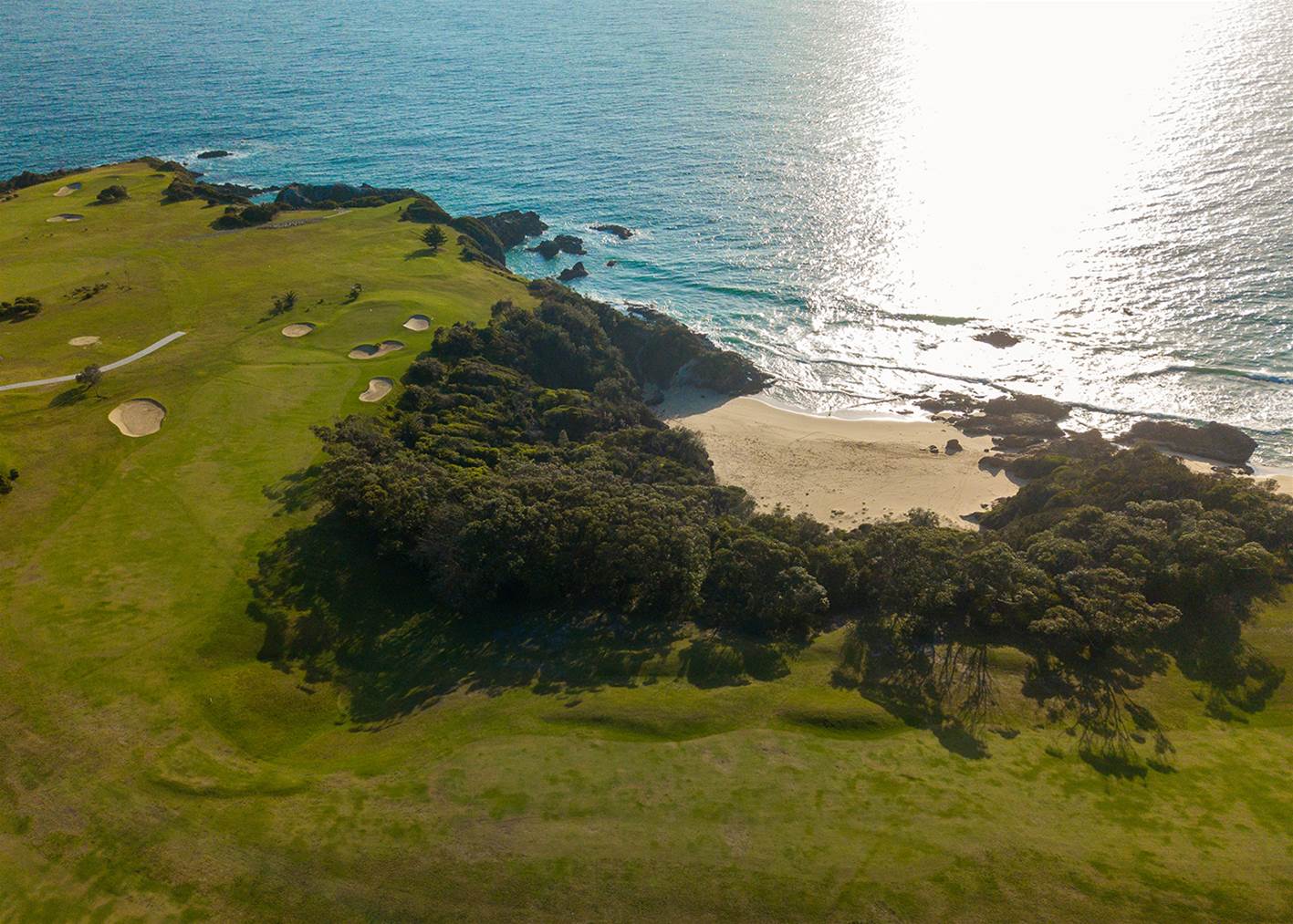 A great driving hole and arguably the best naturally designed hole on the course. The fairway cambers markedly from left-to-right toward the oceanside scrubland and tea-tree for the first 280 metres of the journey before narrowing at the 90 degree dogleg to the right. A deep hollow dominates the corner of the dogleg and only the most regular player at Narooma knows where to aim over the scrub to cut the corner successfully as there are no landmarks just sky above the scrub.