Judge's comments: “Starting along the coastline there are some great strategic holes, which do continue inland at various times. Some complain about the number of blind shots required, but routing would be my biggest criticism, with some very long walks between several greens and tees.” – Carl Murphy.

“Dramatic terrain will always give rise to dramatic golf. Grant’s work at Ocean Dunes might just be the finest of his long career.” – Alex Murray.

“I’ve heard all the whingeing about blind shots at Ocean Dunes. To those people, I say Lahinch ‘Dell’ hole and Prestwick’s ‘Alps’ and ‘Himalayas’ – all great holes requiring blind approach and tee shots. Blind shots were all part of the ‘old’ game and thankfully a designer has been brave enough to incorporate them into a modern design.” – Joe Thomas. 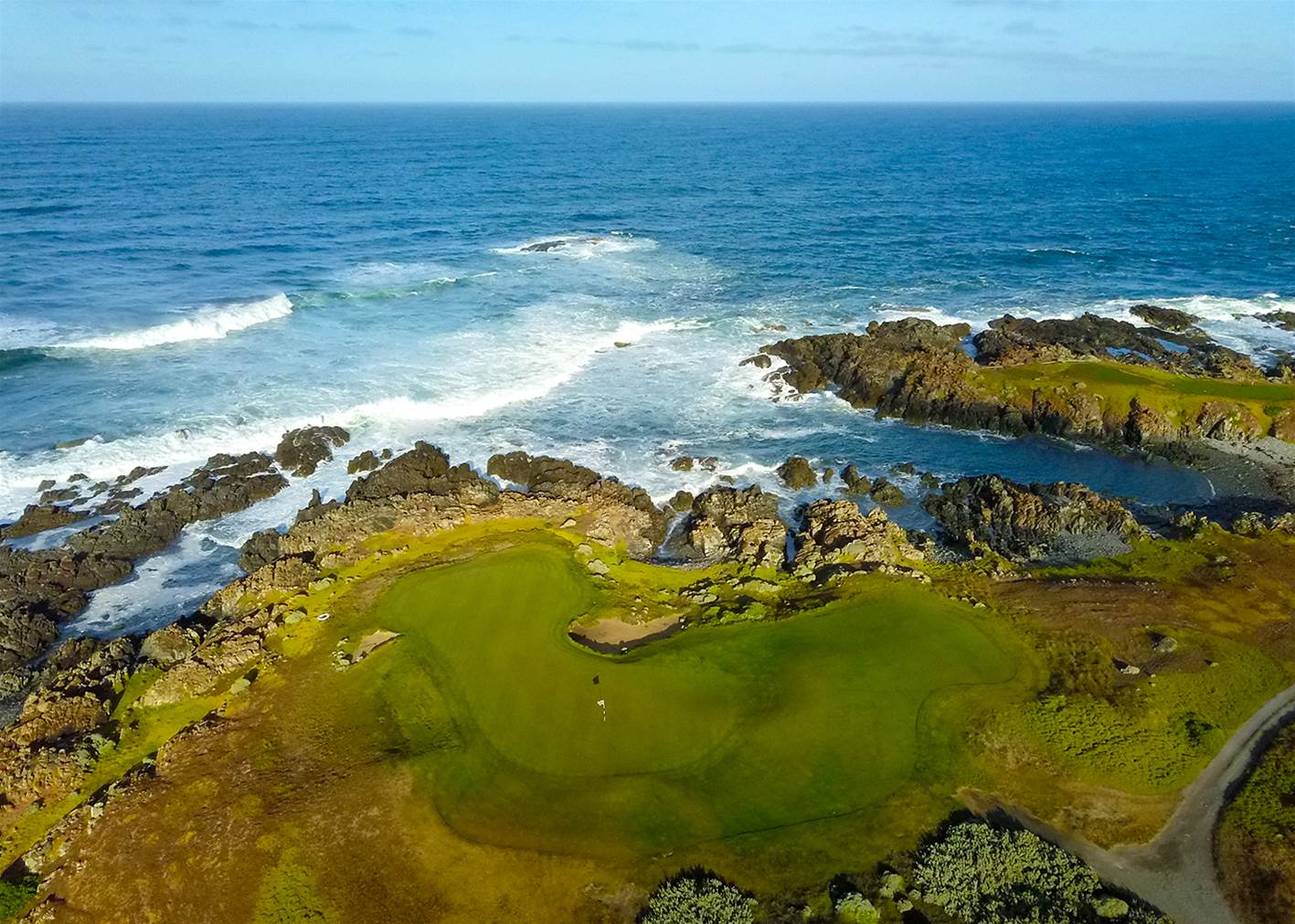 Judge's comments: “Kerry Packer’s brief to designers Greg Norman and Bob Harrison was to create a tough golf course. Mission accomplished on their part. There are a significant number of forced water carries during the round, which are best tackled by longer hitters. I would argue the par-3s, as a set, at Ellerston are as good as you will find anywhere in the country. As you can imagine with so few people playing the course during a year, the playing surfaces are incredible.” – Brendan James.

“Ellerston is a real thrill to play. It is unashamedly challenging, and presents an abundance of demanding drives, and exciting approaches.” – Matt Mollica.

“Moonah’s combination of massive dunes and superb green complexes combine to make a course that is playable and enjoyable to golfers of all standards. One thing that sets Moonah apart from a lot of its peers are it’s fairways, with the fescue over sow of Greg Norman’s GN1 couch providing some of the best playing surfaces in the country year round.” – Brain Walshe.

“A real ‘golfer’s course’ that requires a lot of smart shot placement. Coming in from the right angle with the right shape and trajectory is crucial. You would also be hard pressed to find a more consistently well-presented course.” – DJ Loypur.

“I don’t hesitate to nominate this as Bob Harrison’s finest Australian course. Nowhere else are his serpentine par-5s more engaging, his dramatic greensites as tantalising or the interplay with the natural environment as engaging.” – Scott Warren. Judge's comments: “It is great to see St Andrews Beach thriving and vying for the position of best course on Victoria’s Mornington Peninsula. With a strong set of short fours, diverse and testing par-3s as well as a collection of excellent, understated greens, Doak’s minimalist layout is wonderful.” – Matt Mollica.

“Alluring from beginning to end, St Andrews Beach offers some of the best value golf in the country.” – Andrew Anderson.

“Cups country golf at its finest. Tom Doak gives you room from the tees and then asks questions of every approach shot.” – Ross Flannigan.

Judge's comments: “Tom Doak and Brian Schneider’s revamped 6th green has finally lifted that hole to a quality worthy of its setting. What they can achieve in improving the playability of the 2nd and 17th, as well as the crowded parcel that houses the 9th, 10th and 18th, will ultimately determine whether New South Wales has a future as a top five Australian course.” – Scott Warren.

“Iconic coastal holes, scrubby dunes, tight grass, repelling slopes, revetted pot bunkers and blowout waste areas – there’s a mix of eclectic features at NSW that are all spectacular and beautifully presented but it somehow lacks its own theme to tie it all together. Perhaps over-grassed in areas – it would be wonderful to see more exposed sand. With consulting architect Tom Doak there may be an opportunity to find more strategy in some weaker holes and create a more consistent identity for Sydney’s standout world-class course.” – Adrian Logue.

Judge's comments: “The Tom Doak re-working of the old Ocean course, and transition into the new Gunnamatta has been a revelation. Arguably The National’s best land for golf is now home to its best course. The routing is more sophisticated, while the greens are more organic and individual. Bunkering is sympathetic with the landscape, more sparingly used and ideal in location. Legend couch remains on the fairways while the fescue collars have improved ground game options closer to the pins. A raving success and another new inclusion into the country’s Top 10.” – Matt Mollica.

“The National asked Tom Doak to build a course the members would find both playable and fun and he and his associate, Brian Schneider, have delivered a modern take on ‘Golden Age’ architecture. Gunnamatta is about width and angles into brilliant greens surrounded by fescue that emphasises the ground game. From the gorgeous drivable 2nd, with the green tucked a couple of metres from the out-of-bounds fence, to the stunning skyline green on 16 with Bass Strait as the backdrop, Gunnamatta is about as much fun as you can have on a golf course.” – Brian Walshe.

“The new Gunnamatta is head and shoulders above the course that used to be in its location and will continue to get better with age as the surrounds and fairways have another few growing seasons. A great members course with the 16th and 17th being, not just the highlight of the course, but maybe of all four National courses.” – DJ Loypur.

“Tom Doak has made this course ultimately playable for a wide range of golfers. The fescue approaches are exquisite. The re-routing now delivers a course with such a high degree of variety and fun factor. The 2nd hole and 17th holes are great examples of shorter par-4s where par is earned not a given.” – Ross Flannigan. Judge's comments: “One of Australia’s oldest golf courses is a true treasure that continues to surprise with each round. The subtle undulations, unique greens and playability for all skill levels proves great golf architecture is timeless.” – Michael Green.

“Royal Adelaide is slowly but steadily progressing through a course improvement program that is going along very nicely. Each modification so far has improved the course and there is also good work being done in the roughs and vegetation. This classic course with a unique character is slowly working its way back up to where it belongs in Australian golf.” – Rich Macafee.

Judge's comments: “The remodelling of Victoria has seen it regain some of its lustre, which had faded in recent years. The new Pure Distinction bentgrass greens are magnificent, and the subtle re-working of small parts of the course have improved several holes.” – Matt Mollica.

“Victoria is the epitome of Melbourne Sandbelt golf. An old-world charm, which only enriches the experience. Recent work has seen slight design changes throughout and a complete resurface of the greens allowing enhancements to the contouring.” – Andrew Anderson.

“A piece of land that blends some of the movement of Kingston Heath with the slopes and elevation changes of Royal Melbourne, while being narrower than both, but brilliantly routed on a relatively small property.” – Adrian Logue. Judge's comments: “Is it possible to call Royal Melbourne East a “hidden gem”? Whilst Royal Melbourne West gets most of the attention, the quality of the best holes on East is just as good as its sibling, which means very good indeed. The 2nd and 18th are as good a par-4s as you will play. The 16th would be the best par-3 in many cities and the 17th, and those diagonal cross bunkers, are world class. Doak’s work on the outside paddocks has created more continuity across the entire  18 holes.” – Brian Walshe.

Judge's comments: “Kingston Heath has an enviable reputation as one of the best courses and clubs in the world. It continues to be a great place to play golf and the drop in this ranking has more to do with the bar being raised, particularly with regard to conditioning by some of the newer courses.” – Brian Walshe.

“A course that asks a golfer to reflect on its subtleties and secrets long after you leave the
car park. Its greatness just seems to creep up on you.” – Adrian Logue.

“Kingston Heath continues to enjoy a very high ranking. The Heath is a magnificent place to play golf, and features so many wonderful shots. The course’s bunkering consistently wins acclaim from all who play there, and the green complexes are among the best in the nation.” – Matt Mollica.

“You will struggle to find a course that has aged as well as Kingston Heath … it is simply timeless. As enjoyable and interesting to play the 50th time as it was the first time.” – DJ Loypur.

“Kingston Heath is the benchmark for golf architecture on flat land and small properties. The routing is excellent and is deserving of its reputation as one of the best courses in the world.” – Peter Robertson.