Stretched to 307 metres from the Australian PGA Championship markers, this hole is best played from the blue tees at 289 metres. A lake lines the entire left edge of the wide fairway, leaving ample room to play. A centre line bunker does get you to select a left or right line, with the left side being the preferred side for the second shot.

This little gem offers a smorgasbord of options from the tee. The green is reachable for longer hitters provided they can hit a precise tee shot down the left side. The conservative play also requires accurate hitting to avoid the fairway bunkering and the water right of the hole. Accuracy and distance control are also paramount with the approach to the green, where the contours can make for some fast and breaking putts.

Ross Watson’s redesign incorporates a lot of sand here, as well as a lake flanking all the right side. The best play here is a lay-up short of the cross bunkers to leave a short iron onto a small-tiered green surrounded by water. 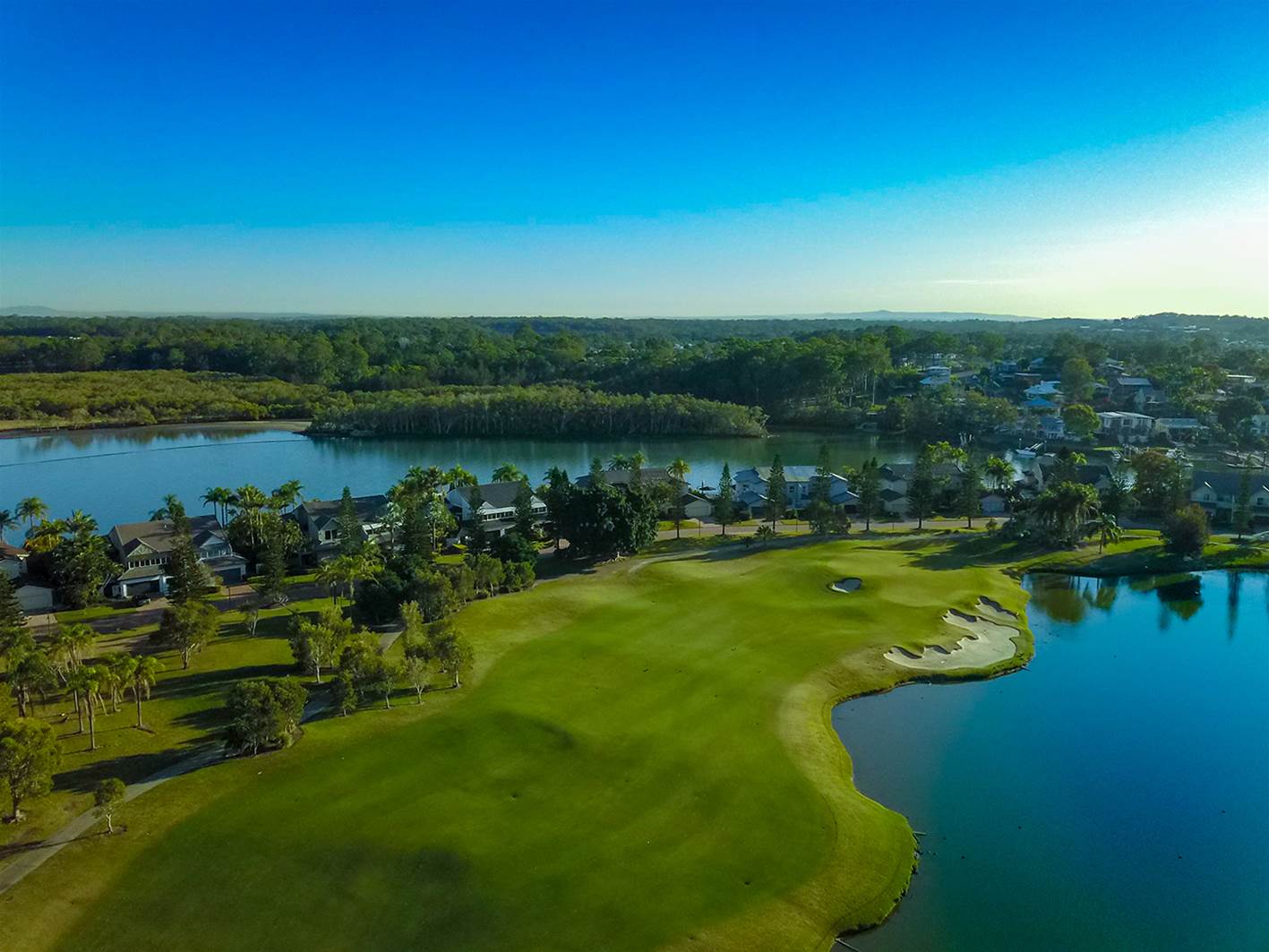 A terrific downhill hole with water all the way down the right and out-of-bounds on the left, which edges in quite close to the rippled fairway that cambers down toward the water. The perfect drive is into the right half of fairway to leave a wedge or short iron to the green.

From the tee, there is a lake to the left and two bunkers on the outside of the slight dogleg left. There’s no point hitting driver here. Choose a club to reach the far end of the fairway and leave a straightforward second shot into a tiered green, guarded by bunkers left and back. Any putt from the back of the green here is fast, while side hill putts have plenty of break. 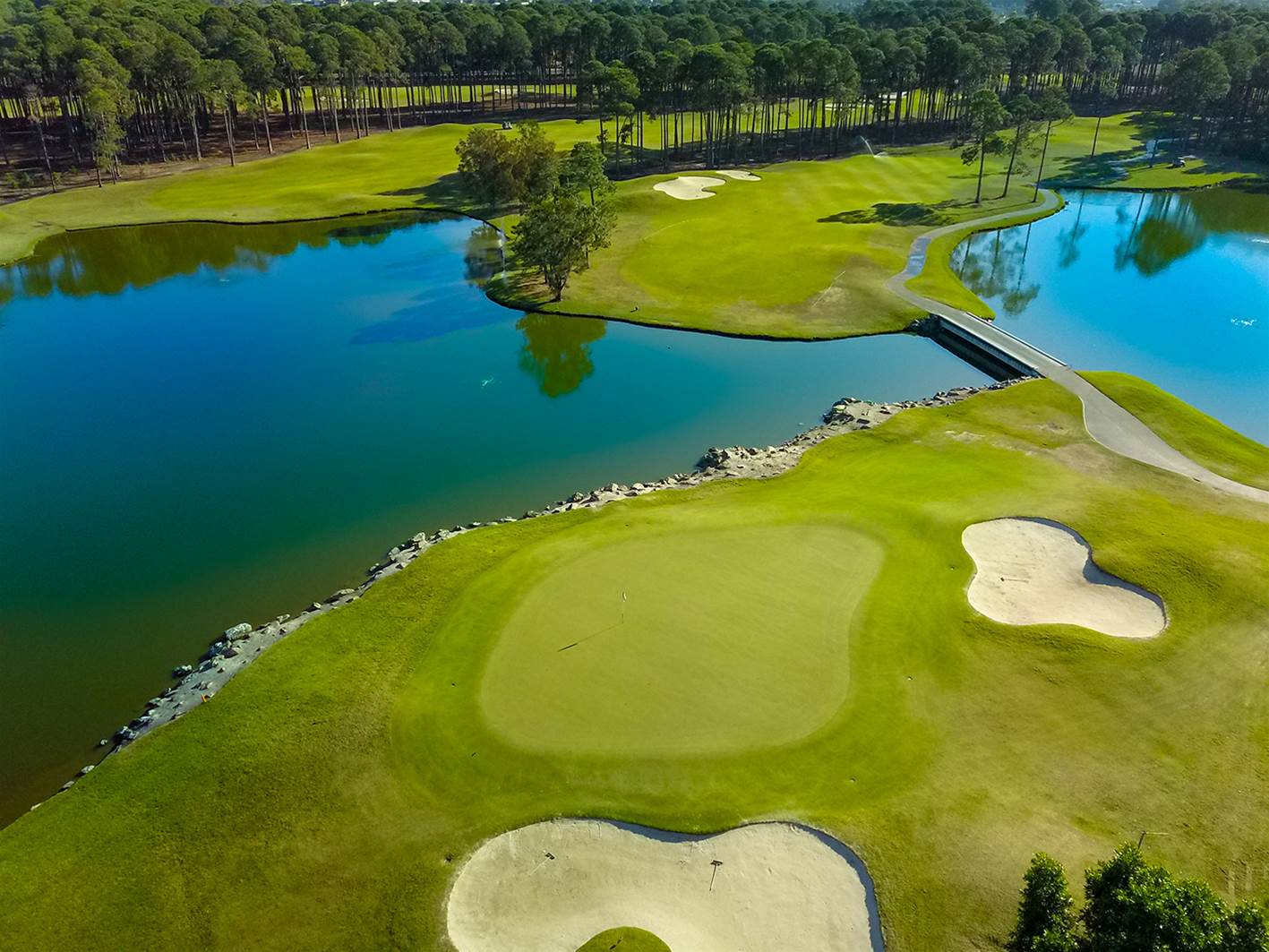 This is a very good risk and reward hole, with a lake on the right and bunkers left defining a narrow landing area for the drive, so those looking to get close to the green have a small margin for error. The slightly elevated green is protected by a large bunker short right, but it is the left bunker – which pinches into the halfway mark of the green – that is easily found and best avoided.

The lake lining the left edge of the hole is the obvious hazard here. It is manageable for big hitters to take on the carry. Laying up into the right half of the fairway is another way to make an easy par as long as you clear some of the deepest greenside bunkers on the course.

A terrific challenge demanding a tee shot over the edge of a lake and short of a scheme of four slightly raised fairway bunkers. Play to the right is safe with a semi-blind second to a long narrow green, which slopes toward the back edge. Hitting to the left, near the water, and the line into the green is clear.

The short 4th is characterised by its small centre-line fairway bunker that asks players to either fly it or veer to one side with their tee shot. The green complex, meanwhile, features five sand traps and the front right pot bunker should be avoided at all costs.

Like all great short par-4s, the first test here is club choice. Do you take driver and attempt to thread your ball between three fairway bunkers, or do you play conservatively and leave yourself a challenging pitch to the well-guarded, two-tiered putting surface? The choice is yours.

Plenty of championships and head-to-head matches over the years have been swung on Kooyonga’s short closing hole. The hole doglegs left and five fairway bunkers will collect any mis-hits from those attempting to cut the corner. Grassy hollows and more sand combine to protect an undulating two-tiered green. 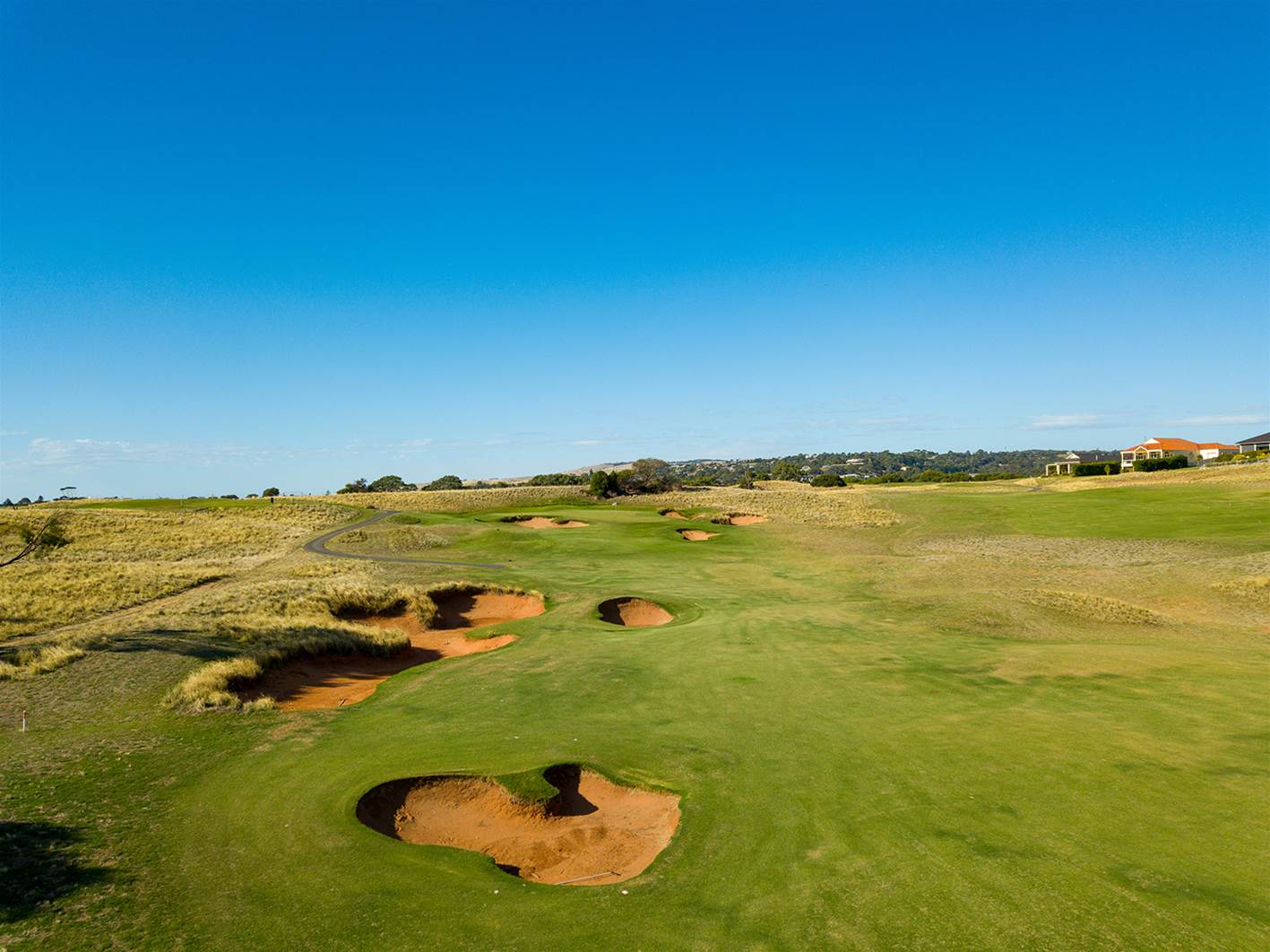 The picturesque back nine opener – designed by Jack Newton, Graeme Grant and John Spencer – is one of the more challenging holes on this list. Large bunkers and grassy mounds bracket the driving zone, which gets narrower the further you hit from the tee. The green, meanwhile, is slightly elevated with a ridge that causes plenty of three-putts.

Players have plenty of options off the tee and a relatively wide landing area. The left portion of the fairway certainly provides the best angle into the green, however anything hooked or pulled is likely to be swallowed by a thick line of trees. Right off the tee leaves a slightly obscured line over trees and two large bunkers for the approach.

Longer players are able to cut the corner of the dogleg left and reach an undulating putting surface 240 metres away … but it is a career shot. Out-of-bounds flanks the inside of the dogleg, while water waits for any wild shot to the right. Don’t let the views over Adelaide distract you once you’re on the green. 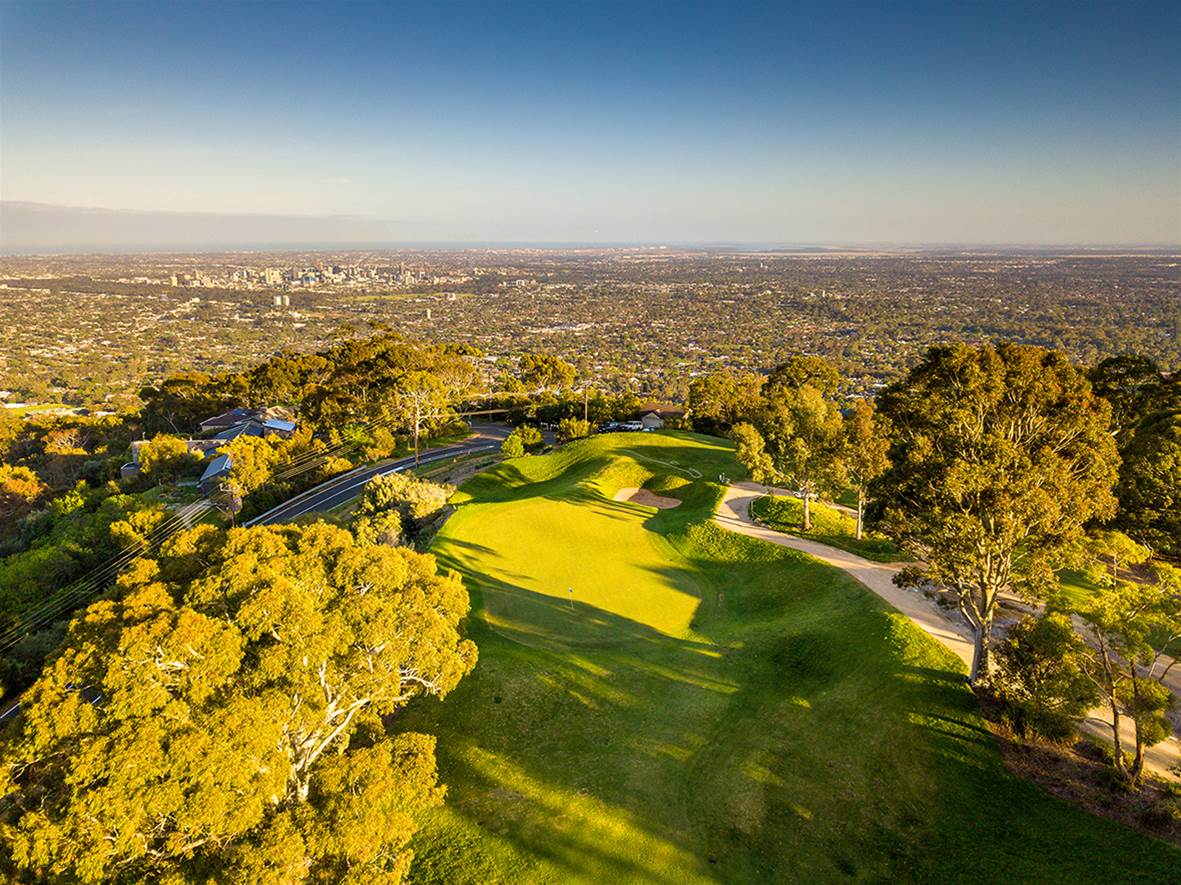 This diminutive jewel was created by the legendary Dr Alister Mackenzie in 1926 and is the only hole at Royal Adelaide that remains faithful to its original design. The iconic ‘leg of mutton’ green can’t be seen from the tee and is guarded by a small angled, rough-covered ridge. Birdies are on offer here, but so are unmentionables.

Greg Norman designed the 306-metre 4th hole in 2013 during major works to the East Course. The wetland and waste area protects the right flank of this hole, while fairway bunkers to the left add some risk to laying up, effectively creating a tight playing line. Wayward approach shots will either find the wasteland or tight-cut hollows.

This short two-shotter provides players with multiple options from its elevated tee and is played downhill over scrubby wasteland. The driving zone tightens the closer you get to the putting surface and two large bunkers line the green’s opening.

Mike Clayton redesigned this hole in 2008 and it now provides players with a wide range of club options from the tee. Those who take driver can attack the green, however they must avoid well-placed bunkers lining the left of the hole. Those who take fairway woods, hybrids or long irons can use the right fairway trap as an aim point and should be left with a wedge or short iron into the green.