The Swede shot a three-under-par 69 in the rain-delayed second round on Friday at Brooklawn Country Club to take a three-stroke lead over Liselotte Neumann at eight-under-par 136.

A fellow Swede and fellow U.S. Women’s Open champion, Neumann birdied four of her last seven holes on Friday to match Sorenstam’s 69 while playing alongside her.

Sorenstam, a three-time U.S. Women’s Open champion who became eligible for this championship when she turned 50 last October, demonstrated the ball-striking that helped elevate her into the World Golf Hall of Fame, hitting 32 of 36 greens in regulation over the first two days of the championship to lead the 120-player field.

“I’m super-pleased, I really am,” said Sorenstam, whose husband, Mike McGee is caddying for her, and whose children, Ava and Will arrived at the course partway through Friday’s play. “The driver today was maybe not as sharp, but my irons were really on spot. Mike and I think we have a good system in trying to figure out where to go, and of course the rain last night makes the greens quite receptive, so I was able to fire more at the holes today.”

Ellen Port, 59, a seven-time USGA champion, shot rounds of 71-69 to share third place with Yuko Saito at four-under. Port played with Carol Semple Thompson and JoAnne Carner in the first two rounds, a group that has won a combined 22 USGA championships.

“I’m super-pleased, I really am. The driver today was maybe not as sharp, but my irons were really on spot." - Annika Sorenstam.

“I’ve had a lot of practice with mental toughness and fighting through, trying to score,” said Port of recent struggles with her game. “My swing was in a little better place coming into this; it was just starting to trend that way, and you never know it if it’s going to all come together. I knew it was at some point; I didn't know if it would be this week.”

Saito, of Japan, who finished fifth in the inaugural championship in 2018 at Chicago Golf Club, played the final eight holes of round one on Friday morning, shooting a two-under 70, then matched her score in the second round. Saito, who competes in several events on the Step Up Tour in Japan, one level below the LPGA Tour of Japan, was among the top three in the field in putting with 1.61 putts per green.

Dana Ebster, 51, a part-time instructor and junior college assistant coach from California who shared the first round lead with Sorenstam at five-under 67, shot a two-over 74 in to sit five strokes back, in a tie with Kris Tschetter and Rosie Jones at three-under.

Ebster, who joined fellow first-time competitors Sorenstam and Nicole Jeray with 17 of 18 greens hit in regulation Thursday, continued her strong play on Friday after getting into the field as an alternate from qualifying.

“People came up to me as I was walking and they were hugging me, saying, ‘We loved your interview,’” said Ebster, whose exuberant post-round video interview after Thursday’s 67 found a wide audience. “I’m like, Oh my God, you watched it? I didn’t know that it was out there.” 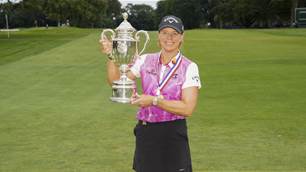 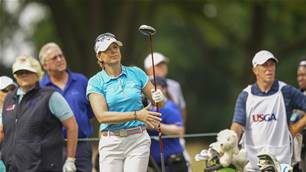 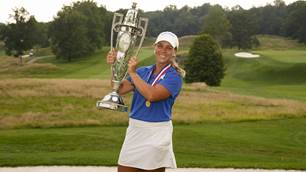