Editor Brendan James has now tipped three winners in four weeks. And with four events around the world this week there is plenty more chances to add to the streak, as well as the opportunity for the other so-called experts to follow his lead. This week’s venue, El Camaleón, has consistently favoured the player who finds the fairway off the tee. In an era of bomb and gougers, seven noted dead-eye dicks – including the defending champion, Brendon Todd – have captured the title since 2007.

One of the best sharpshooters going around at the moment is World No.22 ABRAHAM ANCER, the cool-headed Texas-born Mexican who captured the hearts of Aussies when he won our national Open.

This is his first start since finishing T13 at The Masters, but what impresses me more is his last 11 of 16 competitive rounds have been in the 60s. A PGA Tour breakthrough win this week is on the cards.

Two missed cuts from two starts here is of slight concern, but VIKTOR HOVLAND’s recent form has me convinced he will seriously improve in Mexico this week.

The Norweigan has three top-15 finishes already this season from four starts and his win in Puerto Rico last year was on similar surfaces to what the players will encounter this week at Mayakoba.

MARC LEISHMAN shook off the cobwebs at Augusta two weeks ago to share 13th place. I’m hoping his poor run of form is now behind him and he can capture his sixth PGA Tour title.

His most recent appearance at El Camaleon heralded a share of 24th back in 2016. If his putter catches fire he will better that.

An impressive showing at The Masters ahead of a home appearance in Mexico will see former Australian Open winner ‘AUSSIE ABE’ ANCER in the thick of the action this week.

A player who continues to improve and mature in small increments almost every week, it is unthinkable he will not win on the PGA Tour and common sense suggests it will be sooner than later. Likeable Scot ROBERT MACINTYRE has run into some impressive form during the past month, with a win and T3 in Cyprus before claiming T6 last week in South Africa.

Now in Dubai, my only concern for the World No.61 is fatigue. How is this for a stat? Nine of his past 12 rounds have been a 68 or better.

I simply cannot look past ROBERT MACINTYRE’s recent run of form as Europe prepares to wrap up the year in the desert.

The Scot hasn’t missed the top-10 in his last three starts, during which he claimed his maiden European Tour win, and his game should suit this venue right down to the ground.

I suspect ROBERT MACINTYRE will be a popular pick this week.

The left-handed Scot is one of the best ball strikers in the world and finds himself in terrific form, too, winning his maiden Tour title at the Cyprus Showdown last month and bracketing his victory with a pair of top-10s. He hasn’t scored worse than 72 in his 12 most recent rounds.

The desert hasn’t historically been a happy hunting ground for him but it’s been a breakout year for England’s AARON RAI and in a depleted field at this week’s Golf in Dubai Championship presented by DP World he is a chance to radically improve that record.

Three appearances in next week’s event at the neighbouring Earth Course have yet to produce a finish better than mid field, but it is a vastly more credentialed Rai who tees up this week.

The only concern will be more than a month on the sidelines since his last start but if he can shake the rust off quickly expect him to be thereabouts late Sunday. A win in Dubai and a Top-15 on the LPGA Tour in recent starts has MINJEE LEE primed to contend this week.

You can be assured she will finish Top-10 (she’s already banked 52 of those during her LPGA career) but the search for win No.6 ends on Sunday. She will, however, be hoping for tough conditions to prevail. Her best performance in this event was in 2017 when three under won, and she was just four shots back in T5.

NASA HATAOKA had a horror time of it the last time she teed it up in this event in 2017, but the Japanese superstar is a much better player now and I expect her to be in the thick of things this week.

The World No.7 ended a run of three straight top-10s, including two majors, at the Pelican Women’s Championship, where she was T34 after a slow start, however, Hataoka is one of the best ball strikers in the game and should be there or thereabouts as the week progresses in Texas.

Top-10 machine MINJEE LEE hasn’t won on the LPGA Tour for 20 months – but she arrives fresh off her victory at the Dubai Moonlight Classic on the Ladies European Tour and should be filled with confidence.

The 24-year-old Perth product will find herself in contention this week if she sharpens up her approaches into the greens.

An equal career best T3 last stat and a T6 result at this event last year will see Northern Ireland's STEPHANIE MEADOW start with plenty of confidence this week.

It’s a stacked field and features some of the biggest names in the women’s game but Meadow has been a steady improver the past two seasons and this could just be her time to shine. CHRISTIAAN BEZUIDENHOUT can make it a massive two weeks on home soil by going back-to-back to claim the South African Open.

There were a few hiccups en route to the title at Leopard Creek, but there is no doubting his terrific form at the moment – his past eight from eight tournament rounds have all been under par and he’s 24 under through two events at home in the past fortnight.

It is fairly slim pickings in South Africa this week and DYLAN FRITTELLI is the standout to me outside of last week’s winner Christiaan Bezuidenhout.

Frittelli shared fifth at The Masters and can be forgiven for his missed cut the following week at Sea Island after contending at a major, and will be brimming with confidence upon returning to his homeland and a course where he has a decent record.

Hard to go past the defending champion, but I’m interested to see how WILCO NIENABER handles one of the longest courses on the planet.

The 20-year-old South African leads the European Tour in driving distance with a ridiculous average of 313 metres and is in great form, too, finishing 12th last week and runner-up at the Joburg Open the week prior.

His breakthrough victory can’t be far away.

I’m sticking with my pick from last week, BRANDON STONE, at this week’s South African Open.

He never really got going at Leopard Creek though was hardly terrible and being his home Open he will be highly motivated to win it for a second time. Given his good form in recent weeks, I like his chances of a second home title at the Gary Player Country Club.

So far our so-called experts have combined to tip 18 winners in 2020, with 96 of their picks recording top-10 finishes that week and a best return of $29 for Adam Scott to win the Genesis Invitational (tipped by Brendan James and Jimmy Emanuel). 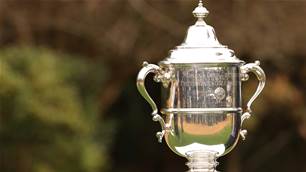