The PGA Tour travels to Mexico this week for the Mayakoba Golf Classic. Here’s everything you need to know, including course information, players to watch and TV times.

COURSE: El Camaleon Golf Club, located in the Playa del Carmen region in the Gulf of Mexico, opened in 2004 and was designed by our own Greg Norman. The course has hosted every edition of the Mayakoba Golf Classic since the event was created in 2007. El Camaleon weaves its way around mangroves and tropical jungle and is set against the ocean. The 6,436-metre par-71 features the iconic “cave bunker” on the 7th hole.

Former World No.1 Justin Thomas makes his first visit to El Camaleon since sharing 23rd place in his first Mayakoba appearance back in 2015. The American, who is currently third in the world rankings, broke par in all four rounds when he last played here and will return in terrific form, having finished fourth at Augusta National two weeks ago.

Thomas bagged shares of second, 12th, eighth and third from his four starts prior to the Masters and appears on track to claim his 14th PGA Tour title, sooner rather than later.

Warrnambool’s favourite son Marc Leishman found some much needed form at the Masters, where he shared 13th place after a torrid run of results.

The World No.27 had missed five cuts and hadn’t finished higher than T28 in 12 starts prior to righting the ship at Augusta National. 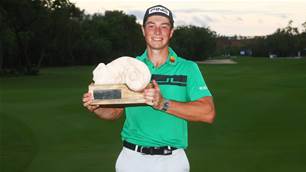