Thailand’s Ariya Jutanugarn delivered another masterclass in a season overflowing with dominant performances to seize the first round lead of the Olympic women’s golf tournament.

The talented 20-year-old burst clear of a packed leaderboard with an opening six under 65 to set the standard on the Reserva de Marapendi Golf Course in Rio, on a day when women’s Olympic golf made a triumphant return after a 116-year absence from the Games.

Victory and a gold medal this week would set the seal on a phenomenal year for Jutanugarn, who reeled off three wins in consecutive starts on the LPGA Tour before landing a first major championship for Thailand in the Women’s British Open just two weeks ago. Olympic glory would be a fifth win – appropriately in view of the association with the five Olympic Rings. “I think I'm going to be really excited, because I like to represent Thailand,” Jutanugarn said. “We want to be the best and have the gold medal for Thailand. I think it's going to be great if I have it.”

Thailand has four medals already at this Olympiad and 29 in the history of the summer Olympics. All have come in weightlifting and boxing. Now, the country that boasts a massive golf tourism industry, is a strong chance of medalling in golf.

“It means a lot,” said Jutanugarn about what it would mean to win a medal for her country.

“When I play here, I feel like the only thing I want to do is make Thai people proud and be happy with me, and I really want to represent Thailand.” - Ariya Jutanugarn.

Jutanugarn collected seven birdies and an eagle, offset by a double-bogey and bogey, in lowering the best score by a woman over the new Gil Hanse and Amy Alcott-designed Olympic course, which stood at 66 for just two hours courtesy of South Korea’s Inbee Park.

Park, one of four South Korean players in the 60-strong field, emerged with great credit from her competitive return in a season curtailed by a ligament problem in her left thumb by carding a five under 66, the same mark as her Korean teammate, Sei Young Kim.

Park, who has been resting in preparation for the Olympics for the majority of the past two months, completed an error-free card and laughed: “Bogey free – it’s been a while! It feels great. It wasn't too windy out there this morning, so I had a lot of birdie opportunities.  I had a really good ball‑striking day and I'm very satisfied with today's round.

“My injury felt pretty good and everything felt like I was quite ready. I'm very happy to see the results like today.  It's a good confidence boost. I felt quite nervous this morning, teeing off, and being able to overcome that kind of nerves feels great,” she said. World No.1 Lydia Ko is well placed after round one. PHOTO: Scott Hallaren/Getty Images.

World No. 1 Lydia Ko did her cause no harm by holing her 9-iron second shot from 136 yards for an eagle two on the par-4 15th, a stunning shot which helped her into a tie for 11th place with a two under 69.

The Kiwi, who at 19 already has two majors to her name, said: “It was my first eagle at the Olympics, so I think it's great. At the men's last week, I think there were two hole‑in‑ones and a few eagles, and I put my contribution to golf by making an eagle, I think is a really good feeling, and especially since I was even par at that point in my round. So to go from zero to two‑under-par was a great turnaround.”

Tied alongside Ko is Australia’s No.1 ranked player Minjee Lee, who fought back with a late run of three birdies to card a 69.

Lee opened her Olympic campaign with a two-putt birdie at the 1st hole and picked up another at the par-5 5th hole. But bogies at the 6th, 10th and 11th holes had the West Australian retreating while most of the field was going under par.

But she bounced back with birdies at three of her last four holes – two of which came courtesy of putts from long range.

Fellow Australian Su Oh got off to a shaky start with a bogey at the 1st hole and suffered a real setback with a double bogey at the par-3 4th hole when she overshot the green with her tee shot and had to hack out of native scrub before chipping onto the green for her third shot. West Australia Minjee Lee opened her Olympic campaign with a 69 to be four shots behind the leader. PHOTO: Scott Hallaren/Getty Images

The 20-year-old Victorian bounced back with her second birdie of the round at the very next hole. Two more birdies at the 10th and 11th were unfortunately handed back with bogies at the 12th and 13th holes. But a superb pitch into the par-5 18th, which nestled to a stop one foot from the cup, left her a tap-in birdie to close out the round with an even par 71 and is tied for 26th place.

Oh and Lee played late in the opening round and will be hoping to make up some ground on Jutanugarn when they head out in the third (9.14pm AEST) and fifth (9.41pm AEST) groups respectively. 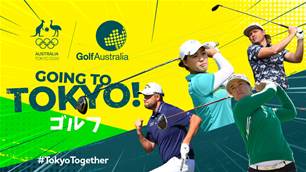 Aussies locked in for Tokyo Olympics