The toughest hole on the Brisbane course features a blind drive over the crest of a hill with water coming into play beyond the rise. A long, accurate tee shot needs to avoid trees on the right and the lake running the length of the hole to the left. A good drive is only rewarded by a mid- to long-iron approach to a green, which slopes left towards the lake and is also guarded by two bunkers right. The view from the 1st tee sets the scene for what follows at the Greg Norman and Bob Harrison-designed Brookwater course. Your drive must carry a deep gully to reach the fairway, which is lined by tall timbers to the left and, initially, to the right. Cavernous bunkers mark the inside and outside of the sharp doglegging left fairway, which then descends gradually to a green protected by a lake to the left and sand to the right.

An interesting two-shotter that sweeps slightly left and uphill, which adds significant metres to the scorecard quoted length. The test doesn’t end once you’ve made the long journey to green, as the dramatically undulating green – surrounded by six bunkers – offers few, if any, flat putts. While the landing area is generous, the tee shot is played from an elevated tee and up into the ever-present wind. Once the tee shot is negotiated, the second calls for a long accurate shot under the wind to a large green protected by two bunkers to the right. Interestingly, a wind shadow exists over the green, which may cause balls to fly further than expected.

This is one of the most intriguing of all the 36 holes to be found at Indooroopilly. The drive is to a left-to-right sloping fairway with water lining the right side of the hole. The fairway runs out just short of a second lake and starts again, to the right of this water hazard. The approach can either be played directly over the water to the angled green or you can lay-up short and right.

Standing on the opening hole of Lakelands’ back nine, you are faced with one of the toughest tee shots in Queensland. The further you venture back on the tee, the harder the shot, not just because of the increased length but the greater angle to the fairway, across the adjoining water hazard. Once on the fairway, a long second shot into a deep, narrow green remains. 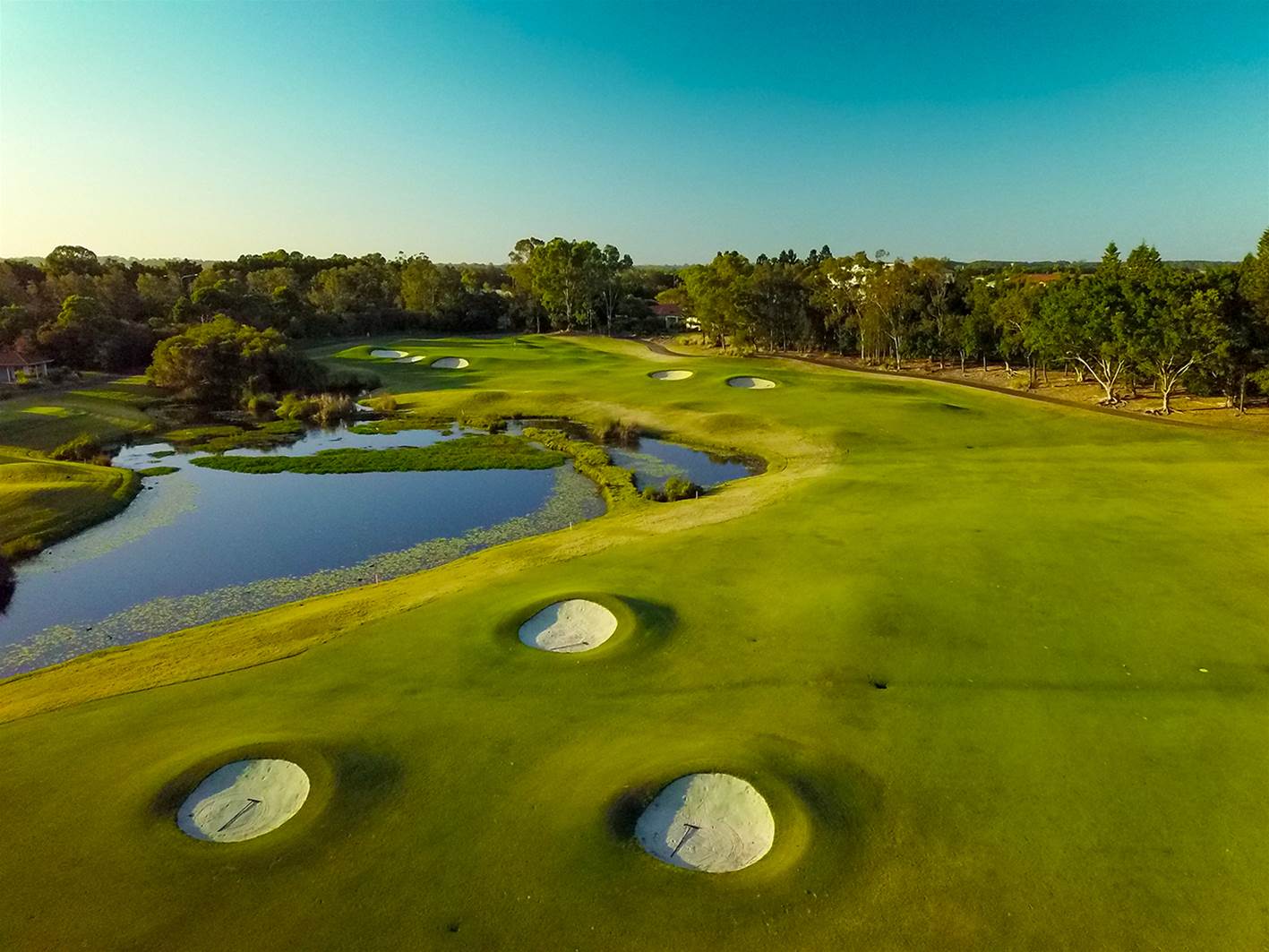 Plenty of danger between tee and green ensures you will never forget this imposing par-4. There is reward for negotiating your tee shot through the middle of five pot bunkers littering the fairway in the driving zone. If you lay-up short of the fairway bunkers, you are left with a long iron shot over water to a green that is guarded by more deep pot bunkers, mounds and swales.

Your guide here are the pot bunkers in the distance. Water hazards left and right can be found well wide of the fairway, which narrows and widens several times between tee and green. The best line into the almost-triangular green is from the left side of the fairway to avoid the four bunkers to the right.

Once the best and most memorable finishing hole in Australian tournament golf now features in the middle of a round. The Robert Trent Jones Jnr design is reminiscent of many of the Tournament Players Club courses in the United States, where water stretches nearly all its entire length and the green is positioned hard against the lake.

The 5th fairway is very wide, but only a drive finding a narrow strip of short grass will leave the ideal second shot. Anything too far right will leave a difficult angle across the greenside bunkers, and anyone left and short of the large fairway bunker faces a blind shot, albeit with a much better angle.

Only the perfect drive onto the high ledge of fairway just right of the large fairway bunker earns the golfer the combination of a clear view and line.

Created by Arnold Palmer, The Pines’ hardest hole boasts water right, trees left and a narrow fairway in between.A steep slope separates the right side of the green with the lake, while a bunker left of the putting surface is a popular spot for players erring on the side of caution away from the water.

This hole would certainly not be out of place on a US Open course. Former Sanctuary Cove resident Ian Baker-Finch rates the 18th on the Pines as one of the world’s great finishing holes. A lake lines the left of the fairway all the way between tee and green, while a grove of pine trees is easily reached through the right edge of the fairway. Most people attack this green with a long iron or fairway wood, which brings the bunkers right and long into play, not to mention the water short and left.

The dogleg left hole tempts long hitters to cut the corner, over the edge of a lake, and avoid two well-placed pot bunkers. It’s a classic risk-and-reward hole where the straighter you drive it – or even left of centre, skirting the hazard – will leave you in good shape for the approach to the green.

The 8th hole is arguably the best to be found at Alice Springs. The fairway winds like a snake between two ranges of the roughest of roughs, passed a fairway bunker into a hill right and down to the green, which is guarded by three bunkers short and one long. It’s a great hole created on beautiful natural golfing terrain. A strong par-4 that turns left through sand hills and was greatly improved years ago with the removal of ti tree to the left and the addition of pot bunkers near the green. The right greenside bunker was rebuilt with a sod-revetted face. Many point to the 2nd as the best hole at Glenelg.

The 10th hole presents an imposing tee shot through tall pines to an elevated fairway. Great importance is placed on the length and accuracy of the tee shot, as the crest of the hill needs to be reached to offer a view of the three-levelled green below. The green is well bunkered left, right, and long, with a successful recovery requiring delicate touch.

Spectacular hole that turns left but with the landing area sloping right. Only a perfect drive gives a clear view of the elevated green. Greatly influenced by the wind, anything from a fairway wood to a 7-iron might be needed to reach the putting surface.

Regarded as Kooyonga’s toughest hole, the dogleg right demands two long and well-placed shots to avoid bunkers and trees en route to a narrow green. This is a hole demanding of two perfect shots to scare par. You are immediately aware the fairway wraps sharply right around the edge of a scrubby wetland. You have options here – you can play safe toward the 150-metre marker visible down the fairway, or you can take your driver and hit straight over the water hazard, shortening the hole significantly and leaving a straightforward short iron shot into the green, set against a sandy dune backdrop.

With a fairway cut in two by a sandy wasteland, this classic par-4 calls for sound course management and precise iron play to an amphitheatre green surrounded by pine tree and marram grass covered dunes.

Widely regarded as one of the best holes in South Australia. The fairway turns perfectly around the cluster of bunkers on the inside corner of the dogleg right and onto a perfect green complex on the other side of a gully.