Four round tournament golf returns to Australia this week, with the Victorian PGA Championship set to take place across the Open and Legends courses of Moonah Links.

Starting in 1922, the Vic PGA is now played in a pro-am format with a 36-hole cut reducing the amateur/professional teams to 24 before eight advance to Sunday’s final round. 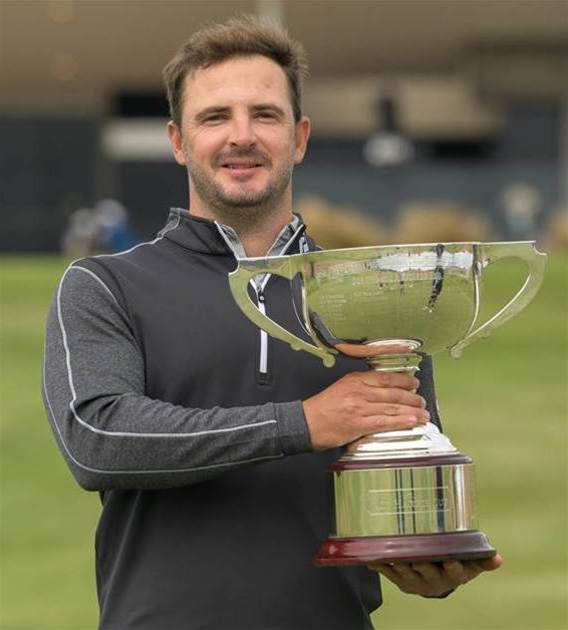 Wood’s birdie at the par-3 17th of the Ocean course and clutch two putt par at the last hole saw him reach a 20-under total and a one shot win over James Anstiss and Michael Sim.

RIGHT: Chris Wood claimed the Jack Harris trophy earlier this year and will defend his title this week. PHOTO: PGA Tour of Australasia.

COURSE: This year’s championship will be played across both the Open and Legends Courses of Moonah Links Resort in Fingal, Victoria.

Originally built as the ‘Home of Australia Golf’ Moonah Links is no stranger to tournament golf. Its occasionally brutal Open Course designed by Peter Thomson, Mike Wolveridge and Ross Perrett and opened in 2001 complimented by the work of Perrett on the Legends Course that opened three years later.

Built to host the Australian Open, as it did in 2003 and 2005, the Open is inspired by the links of Britain where Thomson had so much career success, with the five-time Open champion describing the layout in an intimidating manor for this week’s contestants.

“A mighty and ferocious test of golfing ability, the likes of which even the top pros only occasionally experience,” Thomson said of the par-72.

The Legends is the more friendly of the two loops located in the golf rich Cups region, with wider fairways and less of Thomson’s trademark pot bunkers in place to swallow drives and approach shots. Every hole named for an Australian Open champion.

Ranked 20th (Ocean) and 16th (Legends) in this publications Top 100 Public Access Courses earlier this year, the judging panel noted an improvement in the conditioning of the former in recent times, while the shorter Legends offers more strategic interest.

PLAYERS TO WATCH: A player returning after an extended absence from tournament golf and even touching a golf club is unlikely to be considered by many a significant chance to win. Let alone one like Brad Kennedy discussing how much longer he wishes to continue playing.

But Kennedy was open and honest when discussing his plans to quit tournament golf before winning the New Zealand Open in 2020, adding another Tour win in 2021 at the TPS Victoria event. And once again the Queenslander has been pondering his future. “I really hope that I can get one more season this year with a full schedule. After that it’s going to be a wait and see game as to how much I still want it,” Kennedy told Tony Webeck of the PGA of Australia recently.

Kennedy played two majors this year, some World Golf Championships and played a decent schedule in Japan this year, so despite some potential rust is worth keeping an eye on this week.

Arguably the player of last summer, Bryden Macpherson won around Moonah Links in early 2021 at the Moonah Links PGA Classic and was T16 in this event the week prior.

The Victorian recorded a perfect six for six top-20 finishes on the PGA Tour of Australasia last year, including another win at the NSW Open, and while he had mixed results in Europe through the middle of the year, remains one of the top chances here.

New South Welshman Justin Warren hasn’t played a world ranking eligble event since March, but that doesn’t mean he has been sitting idly by.

Warren’s missed short putt at a PGA Tour Monday Qualifier was not the way he would have liked to gain worldwide attention, yet it proved he has the game to compete at the top level. And a T5 here last year, followed by a runner-up finish to Macpherson a week later suggests the venue suits the game of Warren who is among the longest off the tee on the local circuit.

Plus, Warren closed last week's Western Open at Dubbo with a blistering 64.

Quayle’s 61 puts him on top in Japan