After a week off the PGA Tour of Australasia is back in action alongside the WPGA with the first of The Players Series for 2022. The best local talent headed for Rosebud, where major winner and Golf Australia Magazine columnist Geoff Ogilvy plays host.

The first of two TPS events played early in 2021, the TPS Victoria ushered in a new format for Australian golf that proved immediately successful and popular with players and fans alike.

Seeing men and women compete head-to-head from scaled tees for the one trophy, with a junior amateur element over the weekend, the concept is presented by Cisco by Webex and has recently received an increase in prize money.

A strong field once again descending on the Mornington Peninsula despite the wealth of Aussie competing on various other Tours around the world this week. 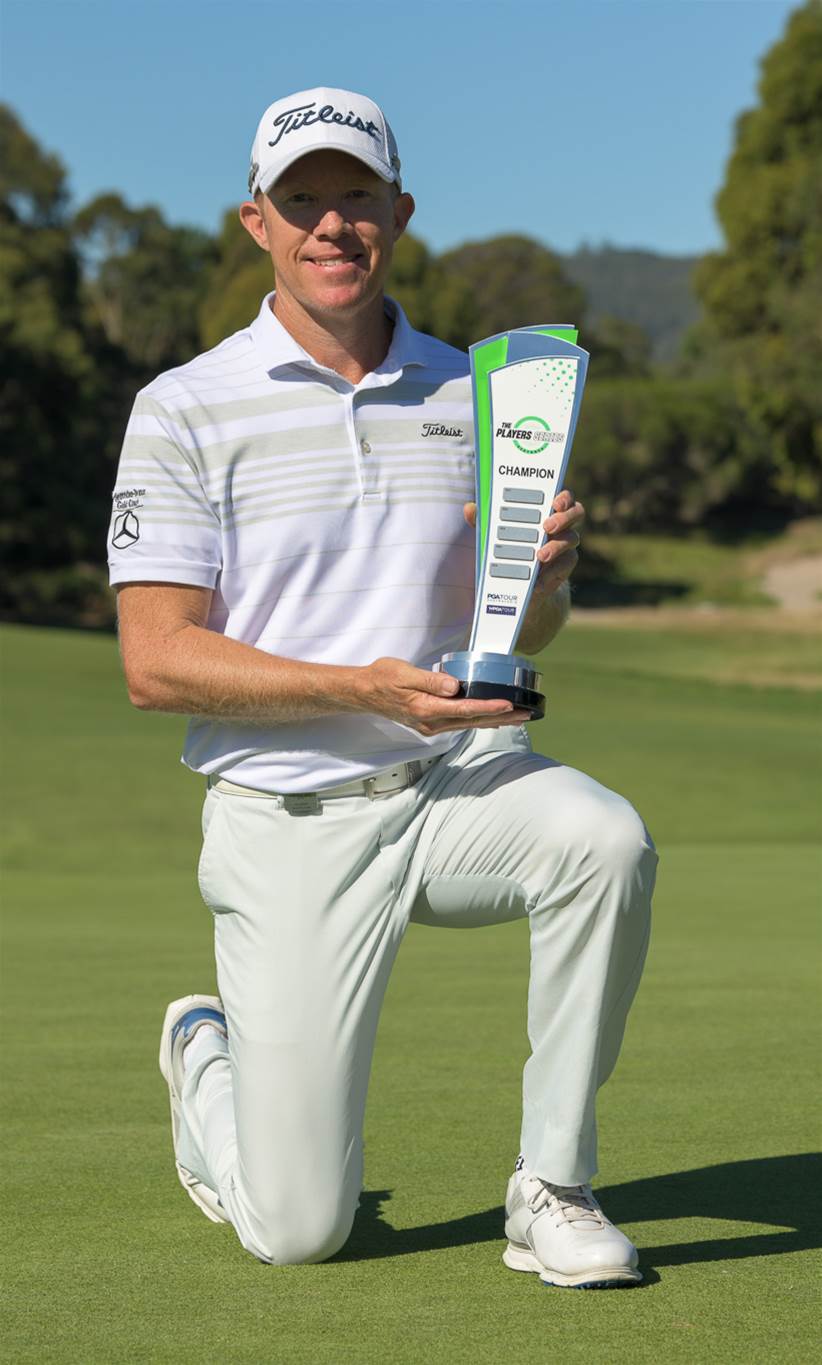 DEFENDING CHAMPION: It was a thrilling conclusion to the inaugural staging of this event in 2021, with Queenslander Brad Kennedy eventually taking the spoils courtesy of a final round 68 to finish at 17-under.

RIGHT: Brad Kennedy claimed the first ever The Players Series trophy here last year, but won't be at Rosebud to defend his title. PHOTO: PGA Tour of Australasia.

Kennedy closed with an eagle-par-birdie run to defeat rising star, and amateur at the time, Elvis Smylie by a solitary stroke, with Nathan Barbieri and LPGA star Su Oh two shots further back.

Smylie started the week with 75 before matching rounds of 63 on the weekend and three straight birdies to finish threw him right into the mix. The Japanese Tour veteran Kennedy holding his nerve at the last to claim the trophy.

Teeing it up at the Saudi International this week, Kennedy will not defend his title.

COURSE: Rosebud Country Club has often been considered an underrated layout, including by our own Mike Clayton, but earnt some well-earned praise and attention during this event last year.

This week the field will compete across a composite course with the North Course to make up the majority of the holes, with exception of the front nine, and with good reason. Ranked No.69 in this year’s Top-100 Courses by this publication, the North Course was originally designed by Jack Watson in 1964 with OCM (Ogilvy, Cocking, Mead) the current consulting architects.

Host to the 1976 Australian PGA Championship won by Billy Dunk, Rosebud owns an interesting design and is exceptionally well conditioned. Some lead in rain making the course a little soft this week that could lead to some low scores.

PLAYERS TO WATCH: With Kennedy not here this week, plenty of eyes will shift to last year’s runner-up Elvis Smylie and it is easy to understand why.

Not only did Smylie with Mike Clayton as caddie clearly enjoy this layout last year, but the young Queenslander has been in good form so far this year recording T12 and T18 finishes at the Australian and Queensland PGAs last month.

Smylie is of course the son of tennis royalty in Liz Smylie, but he is more than making his own name with his golf, and improved every day at Royal Queensland. The only thing lacking so far for Elvis is a pro win.

With Aussie PGA winner Jed Morgan in Saudi, the QLD equivalent winner Anthony Quayle can continue to chip away at the monumental task of hauling in his fellow banana bender on the Order of Merit this week. Grace Kim is among the players to watch this week and could very well become the first woman to win a joint pro event. PHOTO: Bradley Kanaris/Getty Images.

Quayle was super impressive on his way to victory at Nudgee following a share of sixth the week prior, but a missed cut here last year is cause for a little consternation this week.

Of the local Victorian hopes, tournament host Geoff Ogilvy shouldn’t be discounted despite a weekend off at the PGA, while Bryden Macpherson was fifth here last year and appears to be rounding into some form. However, it is former amateur star David Micheluzzi who might have the best chance to take out the title.

A pair of T9s at the two PGAs played earlier this year showed that the man known as ‘Mica’ is in good form and he was tied for 19th last year, with a second round 74 the undoing of higher honours.

Also worthy of mention is big hitting Justin Warren who found himself right in the mix at Nudgee on the final day, while amateur Jye Pickin is a great prospect of the future.

Grace Kim arguably is the best chance of the women’s contingent, despite multiple LPGA players in the field, after her runner-up finish at the WPGA Championship to Oh and top spot at the Sandbelt Invitational in December.

Kim drives the ball exceptionally straight, manages her game brilliantly, loves playing alongside the men and a pro win at home feels a matter of when not if.

After a false start to her year with a Covid enforced withdrawal at the WPGA, Steph Kyriacou will be hoping to get her year off to a red-hot start with her first 72-hole event of 2022.

Now an LPGA Tour card owner, the St. Michael’s member has been one of the best, and most consistent, Ladies European Tour winners since winning on that circuit as an amateur and it will be interesting to see how she fares as a pre-tournament favourite.

Two of the best WPGA performers here last year, Karis Davidson and amateur Kirsten Rudgeley, are also worth keeping an eye on.

Rudgeley impressed every one of her playing partners at Royal Queensland, including some who encouraged her to turn pro as soon as possible, while Davidson, now an LPGA member, was a last start winner at the WPGA Melbourne International.