Adam Scott was on hand at River Ridge Golf Club in California on Monday to send the final groups of his own AJGA event off, and see compatriot Jeffrey Guan take home the boys trophy.

Fresh off a fourth-place finish at The Genesis Invitational, and still in the tan sweater he wore four days straight at Riviera and reportedly quoting The 12th Man in reference to it, Scott was on site of the Victoria Lakes Course for the American Junior Golf Association (AJGA) tournament bearing his name.

Sydneysider Guan once again impressive on his way to the boys title, while Justice Bosio went agonisingly close to being the girls winner also playing her first U.S. event. 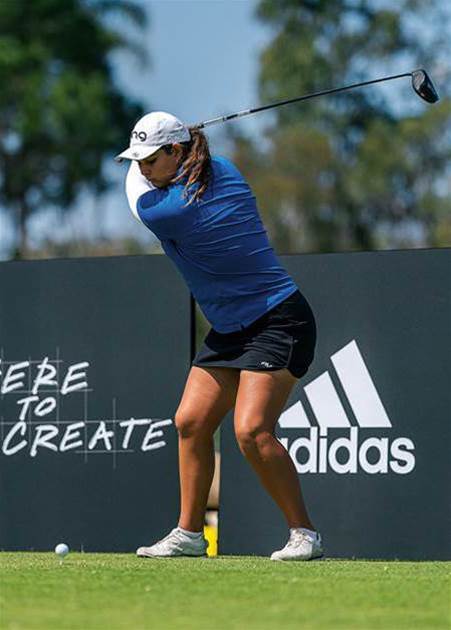 Played over 54 holes, Scott’s tournament welcomed 78 players aged between 12 and 19, with the boys teeing it up over 6,998 yards and the girls traversing a 5,900 yard layout.

Guan, the current leader of the adidas Junior 6s Tour boys points race, got out of the blocks well with a 69 before firing the low round of the week on day two, a five-under par 67 to take control of the event.

Playing the final day with a healthy lead, the young man who hails from Bexley and is now a member of The Australian Golf Club, a favourite tournament venue of host Scott, was undeterred by the pressure and pressed his advantage further with a bogey-free three-under front nine.

Guan then made eight straight pars on the way back into the clubhouse before a birdie at the par-5 last for the third consecutive day gave him a final round 68 and 12-under tournament total.

The only player in the field to record three rounds in the 60s, Guan’s 204 total was eight shots better than Collin Hodgkinson of Oregon who took runner-up honours on four-under.

Hailing from Caboolture Golf Club in Queensland, Bosio was the 2020 winner of Ewan Porter’s adidas Junior 6s Tour and went to America fresh off a 10th place at the Vic Open. Currently ranked 185th in the WAGR (World Amateur Golf Ranking), Bosio opened with 74-71 over the first two days and looked to be the likely victor after matching Guan’s front nine on Monday.

However, two double bogeys and a bogey over the closing four holes saw the former Keperra Bowl winner sign for 74 and local Frances Kim emerge the champion at one-over-par, two shots clear of Bosio and fellow Californian Elise Lee.