Sydneysider Andrew Evans could barely believe the drought-breaking trophy he was holding at the Isuzu Queensland Open after fearing he might lose his Tour card just weeks ago.

The journeyman pro was a worthy two-shot winner of his first title in a decade of striving and promptly cancelled his flight home so he could properly celebrate.

“This is unreal ... I never thought this day would happen.

“I try not to look at leaderboards but I had a guy with a mobile leaderboard 50m ahead of me the whole day so I had to try hard to stay doing my own thing.

“I think I’m a good player but without something like this to your career you are kinda just another player. It’s pretty sweet to get over the line.”

Evans drilled a wonderful 5-iron close to the pin from 180 metres at the par-4 16th to grab his seventh birdie of a tense final day at Pelican Waters Golf Club outside Caloundra.

That was the clutch shot that gave Evans (68-70-65-67) some breathing room at 18-under-par and had mates at Sydney’s Bonnie Doon Golf Club rejoicing. 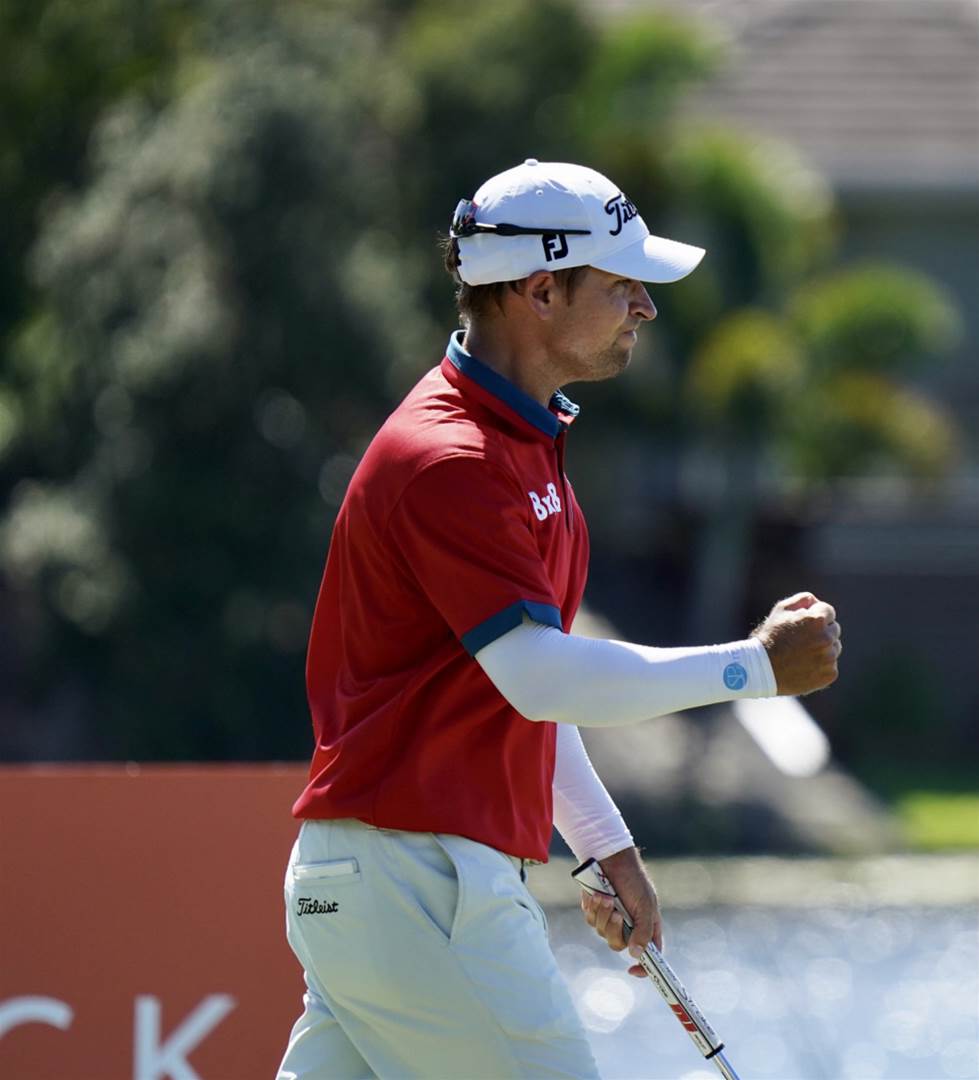 He showed his nerve leading for the entire back nine to finish ahead of three players in joint second, Gold Coast-based Deyen Lawson, Newcastle’s Blake Windred and Melbourne’s Bryden Macpherson, who finished with three straight birdies.

Evans, 35, forever banished the bridesmaid tag and worse which he has lived with since finishing second to Peter Senior at the 2015 Australian Masters at Huntingdale.

“That week was great but unfortunately a lot of people just remember the rushed three-footer I missed on the last green which didn’t mean anything. People said I choked so that was tough to get over,” the former Bexley Golf Club trainee said.

“I missed a lot of cuts last year and three in Victoria to start this year and absolutely I was worried about keeping my card to stay on the Tour,” Evans said.

Lawson (69-70-67-66) finished birdie-birdie for his closing 66 to reach 16 under and it will build confidence for his imminent return to Europe to play.

Windred, with a closing 70, fought hard after a messy double-bogey on the 8th when he hit it into the trees.

It was a worthy defence but two missed birdie putts from around two metres on the last two holes showed how close he got.

He got inside two metres on the hole-in-one hole: “The 7-iron looked pretty good, it was feeding to the pin from the right and just came up short.

“The caddie fee is 10 percent so KB (coach Ken Berndt) was looking good for a while there,” Quayle said.

Dalby left-hander Lawry Flynn was top amateur at 14-under after closing with a fine 68.

Fifth-placed Sunshine Coast local Shae Wools-Cobb (70) rued what might have been.

He had two back nine eagles, set up by ripping 6-irons to both par-5 greens, but was making up for four ragged bogeys on the front nine.

“I was proud of myself for staying patient because I was pretty nervous to start,” the Pelican Waters member said.