Ben Cook had an inkling in near-darkness on Friday evening at Kiawah Island’s Ocean Course that the 8-foot putt he was standing over could prove to be quite significant. In truth, he had no idea how big it was.

After being overly aggressive on a downwind, downhill birdie putt, Cook, 27, Director of Instruction at Yankee Springs Golf Course, knocked in the 8-footer for par to join fellow club professional Brad Marek in making it to the weekend at the 103rd PGA Championship.

And what a weekend it was. Playing alongside 2012 U.S. Open champion Webb Simpson on Saturday and Sunday, Cook shot 69-74 to lead the PGA’s Team of 20 and earn Low Club Professional honours.

Cook played his final five holes at the Ocean Course on Sunday in 1-under, and finished at 4-over 292 for the week. Marek, 37, who coaches promising junior players who aspire to play in college at Corica Park, shot 76 Sunday, finishing on 12-over 300. Cook proved tough to catch.

Brad Marek became emotional upon completing his final round on Sunday at the PGA Championahip. PHOTO: Cliff Hawkins/Getty Images.

“It’s very cool,” said Cook, who spent this winter at John’s Island Golf Club a 54-hole facility that sent three assistants to this week’s PGA Championship. Cook was making his third consecutive start at the PGA, and received a bowl for being the low Club Professional from this year’s talented Team of 20.

“It's always something I've strived to do the last couple years, and now that I've made the cut and was low club pro this year, it's definitely a goal achieved, along with making the cut,” Cook said. “Very happy.”

Cook has status on the PGA Tour LatinoAmerica and has aspirations to play his way onto the Korn Ferry Tour. By making the cut at a major championship, he moves past the second stage of Q-School this fall, which will guarantee him some Korn Ferry Tour status.

“That would be the worst-case scenario,” he said.

“I mean, it is weird to think that it came down to the last putt on the last hole (on Friday) that I almost three-putted to miss the cut,” said Cook, who finished third at the PGA Professional Championship to earn his way to the Ocean Course. “But I made it, thankfully, and then without that … none of this would have happened.

“Very, very blessed, and thankful that I made that putt for sure.”

Marek played for about a decade on mini-tours, winning on the Dakotas Tour, before turning to a career in teaching others. He exchanged texts with several of his juniors this week and cannot wait to share some of the lessons he has learned from all the PGA coaches he talked to this week on the practice tee.

This was Marek’s first time on such a big stage. How much did it mean to him? As he left the 18th green after his 76, he was in tears. A large group of his family and friends made the pilgrimage to Kiawah Island, a group that included his high school golf coach from Illinois, Dan Caporusso.

As Marek tried to tell the media about what this week has meant to him, mentioning his wife, Kristine, and his PGA coach, Garrett Chaussard, he broke down again, and needed a few minutes to gather himself. Playing in a major, and doing so well by making it to the weekend, this really had been a dream turning to reality.

Gathering himself, Marek would add, “The support is awesome. I get off the course and my phone has too many messages to count, on email, Instagram, text message, stuff like that. You know, texting with one of my juniors the other night, he has aspirations to play out here, and if I can make the cut in this, he can … I think it should help people understand that if you put your work in and put the time in that anything is attainable.”

First place on Sunday at Kiawah Island paid nearly $2 million. Marek said his next event will be a mini-tour event where first place pays $10,000.

“It’s going to be a little bit of a culture shock to go back to that,” Marek said, smiling. 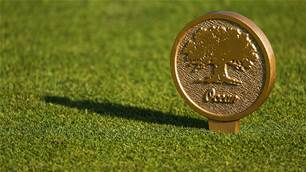 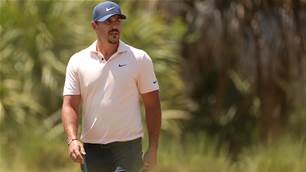