It’s tiring – and frankly tiresome – to constantly argue about public golf with people who are not only completely uninformed about the game but apparently wilfully ignorant.

An article by author Nikki Gemmell in the Weekend Australian on Saturday is the latest disappointingly misinformed salvo in an important ongoing discussion about the future of Sydney’s Moore Park Golf Complex.

Among the list of cliches relied on by Gemmell to demonise the game and those who play it was the notion that golf is for the ‘few’ at the expense of the ‘many’.

There is much irony in the reality that the ‘favoured few’ (as Gemmell refers to golfers) are not actually those found on the fairways of the nation’s public golf courses but those who have ready access to the column inches of the country’s only national daily newspaper.

To choose to use that space for the unresearched airing of personal biases and to tap into false and damaging cliches about golf borders on irresponsible.

(People’s livelihoods are at stake in this discussion and a bit of respect for that – regardless of one’s personal views about golf – should be a minimum.)

There is nothing wrong with being on the side of the argument that would prefer Moore Park be reduced in size.

That is a perfectly legitimate position and one that no doubt has some arguments to support it.

But – and this is equally true for those of us on the ‘other’ side – those arguments need to be made in good faith. Moore Park with views of the Sydney city skyline is once again in the crosshairs of non-golfers. PHOTO: Brendan James.

Deliberately inflammatory comments such as the game being for the ‘favoured few’ who can ‘afford their exorbitant fees’ and regurgitating Malcolm Gladwell’s demeaning ‘crack cocaine for old white guys’ line is hardly arguing in good faith.

So let’s – in good faith – respond to some of the ‘arguments’ put forward in Nikki Gemmell’s piece.

The ‘favoured few’ notion fails the common sense test when talking about Moore Park and public golf in general because it is, by definition, available to any member of the public who pays the appropriate green fee.

(In the same way many of our National Parks charge a fee for access to cover maintenance and staffing costs so, too, does a public golf course.)

‘Exorbitant fees’ is open to interpretation but the most expensive green fee on the Moore Park website is $65 for a weekend tee time to play 18 holes taking roughly four hours. $15 per hour seems – comparatively – not ‘exorbitant’ in the entertainment market?

‘Crack cocaine for old white guys’ doesn’t deserve to be dignified with a response though I’m sure many women and youngsters who play the game would disagree with the sentiment.

Gemmell goes on to draw a puzzling connection between childhood obesity and the existence of golf courses.

“Meanwhile,” she writes, “just look at all the jostly kids living on the edges, with nowhere close to run and jump and get proper grubby like they should. Kids growing ever fatter because studies continually lecture us on this, kids increasingly short-sighted as they curl like commas on their couches over their luminous little rectangles. Meanwhile, where do the children play?”

With respect, could the children not play in the 144 hectares of Centennial Park that is NOT taken up by Moore Pak golf course? Or – God forbid – have a crack at golf itself?

Moore Park not only welcomes juniors but runs programs catering to children from as young as 3.

The truth is there is no lack of space for kids to run around because of the existence of Moore Park and to suggest there is draws a very long – and disingenuous – bow.

"Deliberately inflammatory comments such as the game being for the ‘favoured few’ who can ‘afford their exorbitant fees’ and regurgitating Malcolm Gladwell’s demeaning ‘crack cocaine for old white guys’ line is hardly arguing in good faith."

There is, of course, the mandatory reference to golf being a ‘shrinking game’ despite that being factually incorrect at present thanks to COVID.

But even when the game was losing players over the past two decades, the responsibility of a government which owns a golf facility is not to close said facility under such circumstances but to actively encourage more use of it.

Golf is no less – or more – important than all other sports which governments promote.

And done properly golf – unlike almost all other publicly owned sports facilities – can in fact make a healthy financial contribution to the community.

Moore Park is proof of that with its annual multi-million dollar profits.

Next up: “The sport is expensive.” No, it’s not. It can be, yes, but absolutely doesn’t need to be. For proof of this follow Sandy Jamieson from Melbourne’s Oakleigh Golf Course on Twitter.

Gemmell goes on to say: “I’m not calling for golf’s abolition, just a reclaiming of its precious land in our inner cities for the many who’ll directly benefit.”

Ironically, this is precisely what will go a long way towards golf’s abolition. Removing golf from the public sport menu guarantees it will become the preserve of only the wealthy.

This is followed further on by: “So I say have the larger courses in outer suburbs and country areas, by all means, where there’s less competition for the gift of nature. Because if you can afford the club fees and clobber, you’ve got the means to travel.”

There are no club fees – affordable or otherwise – attached to public golf. Club membership is a choice, not compulsory. The silliness of the ‘clobber’ comment speaks for itself.

More importantly than any of that, though, is the dangerous notion that driving golf out of urban areas is somehow a positive.

Leaving aside the open-ended question of what ultimately fills that space (hint: likely some sort of development ultimately), there is the not insignificant matter of denying kids in urban areas the opportunity to experience the game and decide if they might like it.

Even if you don’t like golf, proactively and deliberately denying young people access to a legitimate pastime they could enjoy for their entire life – or even make their profession – is a difficult position to defend.

Like so many non-golfers, Nikki Gemmell has a view of the game which is completely inaccurate and, in many instances, blatantly wrong.

Yet she is confident enough in those views to espouse them – without any apparent research or consideration of opposing points of view – in a national newspaper.

I don’t point any of this out to be disrespectful to Nikki Gemmell. She is a best-selling author and highly regarded in her field.

But on this particular topic it is difficult not to get frustrated with having to correct the same misconceptions over and over again.

Nikki Gemmell’s article has and will be seen by hundreds of thousands of people thanks to her platform. Many who read it will be non-golfers, and they will take her assertions as fact.

My piece here will be seen by far fewer people and only a handful, if any, will be non-golfers. That is a dangerous way to have an important debate.

The discussion about the amount of space public golf occupies is a legitimate one and we in the game need to engage in it proactively and in good faith.

But so, too, do those who believe the opposite. It is the only way the issue can move forward in any meaningful way. 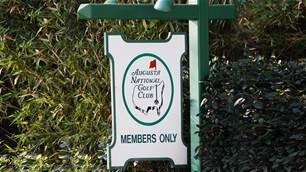 Morri: Why golf needs to change its narrative