With that in mind, we asked our Top-100 Courses judging panel to cast their votes on the best par-3s in Australia. More than 160 holes got a vote and we narrowed down the list to the leading 100. Here they are....

Many believe this is the crowning glory of Tom Doak’s design at Barnbougle. It is an exquisite short par-3 (pictured above) that punches well above its weight in terms of difficulty based on its diminutive stature.

Measuring just 112 metres from the tips, it demands respect with big bunkers completely ringing the small target. With the prevailing wind into your face here, it is not unknown for a mid- or long-iron to be used from the tee.

Of all the par-3s showcased here, this one features the wildest of green complexes. It is a massive putting surface with several bowls separated by steep slopes, creating different levels, which represents the challenge from the tee – if you don’t get your tee shot onto the right level you could be faced with a very difficult two-putt. 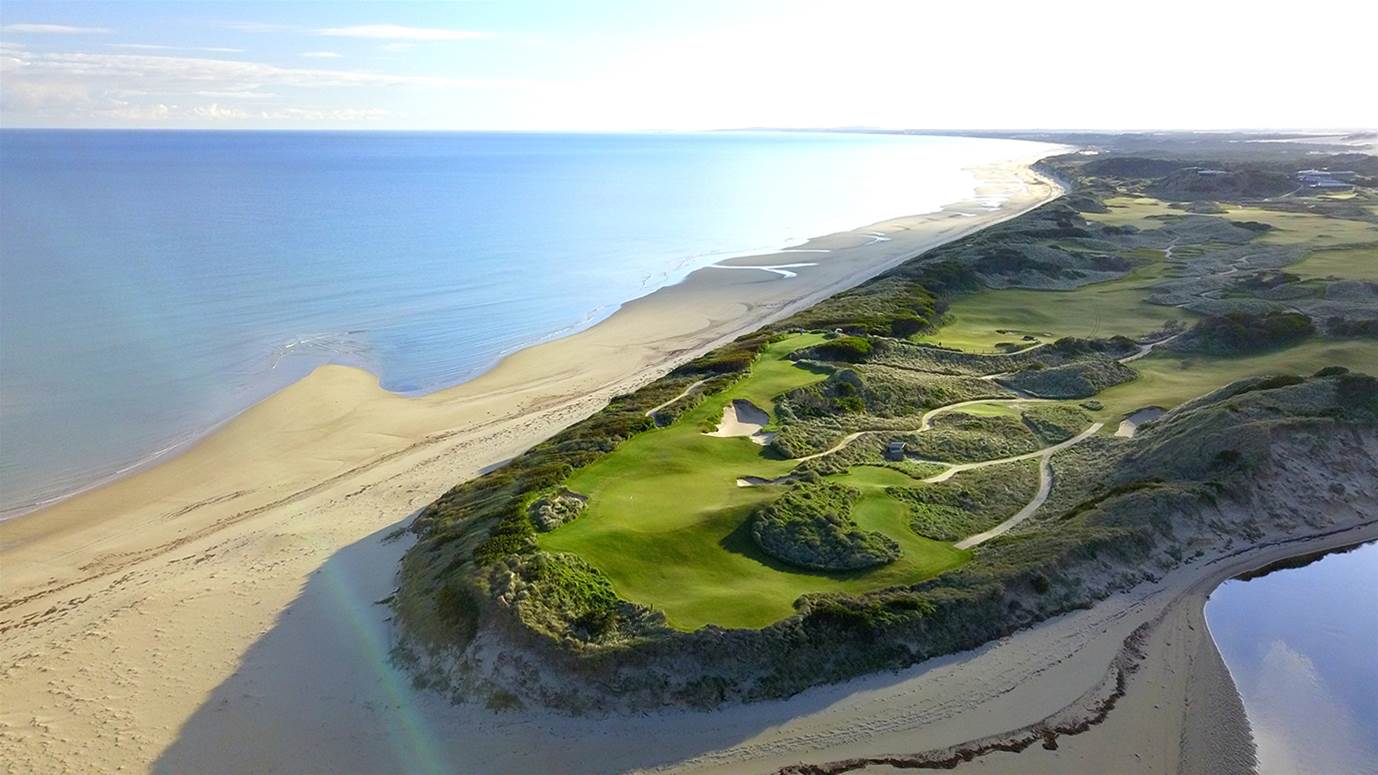 Barnbougle owner Richard Sattler named this little wonder in honour of his wife, Sally, who had selected the site of the 4th hole as a possible site for their new home. Richard thought it would make a better par-3. He was right. The hole is well exposed and players must hit into the prevailing wind, which makes club selection tough. Punching a little 5-iron into the wind here is not uncommon.

Lost Farm is spoiled with riches, including having 20 Bill Coore-designed holes on the property. The first of the two spare holes, 13A, is a little gem.

Played slightly downhill across a deep grassy gully between the sand dunes, the short par-3 features a small false-fronted green and slopes off the back edge as well as a ring of bunkers. 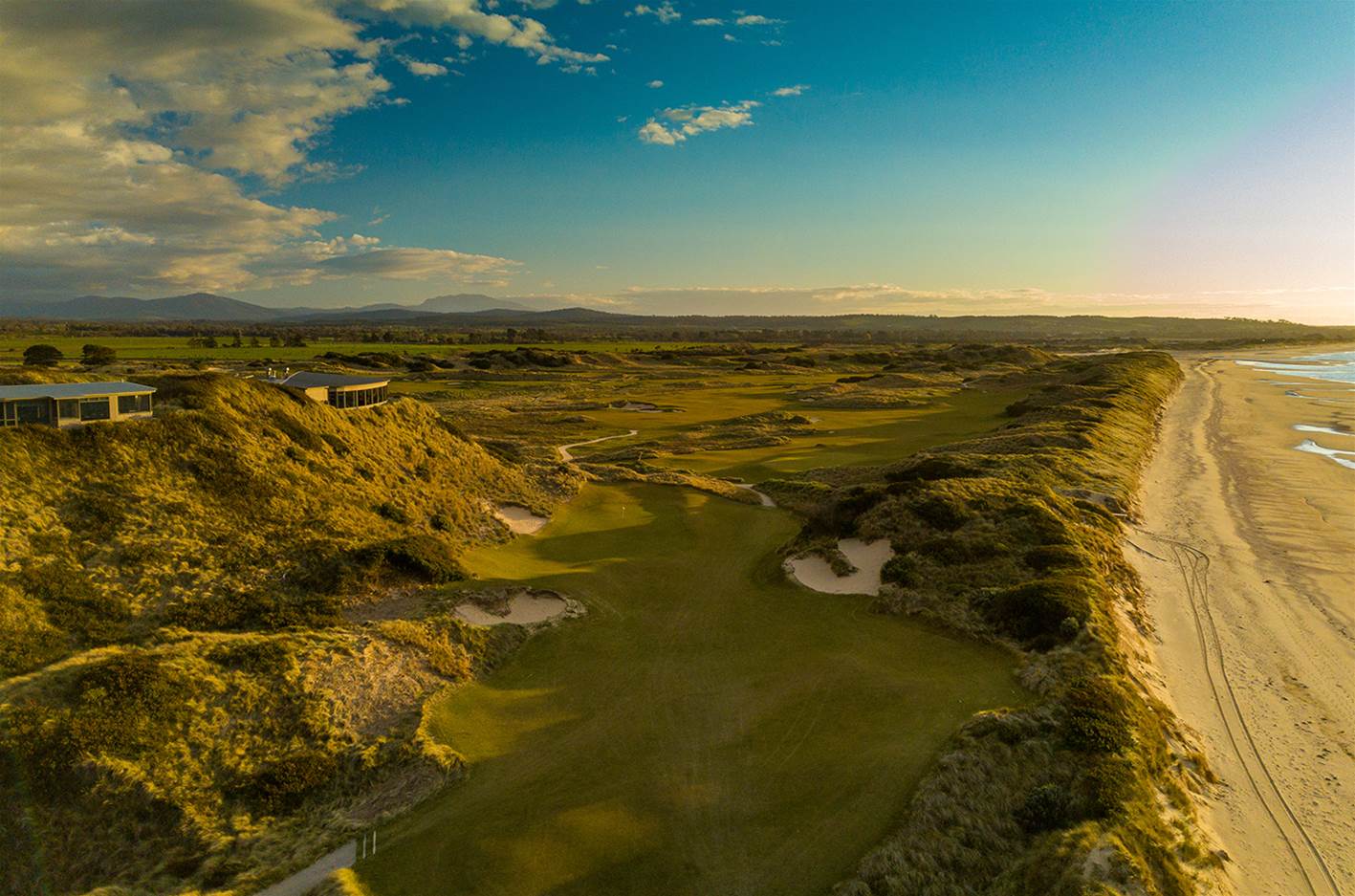 Running parallel to the beach and wedged between dunes to the right and the clubhouse atop a massive dune to the left, the 15th is a spectacular and demanding one-shotter.

Large bunkers carved out of the dunes feature left and right and need to be avoided en route to the green, which slopes markedly from
back-to-front.

Depending on the wind of the day, this par-3 plays strong or brutal. The prevailing south westerly wind is into your face here so the journey from tee to green – across a rocky shoreline – is usually longer than the scorecard suggests.

The shortest of Cape Wickham’s quartet of par-3s is the closest you will come to the waters of Bass Strait during a round. Both the tee and green are perched just above the rocky shoreline and exposed to the south-westerly winds from the left. A deep pot bunker cut into the left edge of the green encourages you to play for the right half of the putting surface. 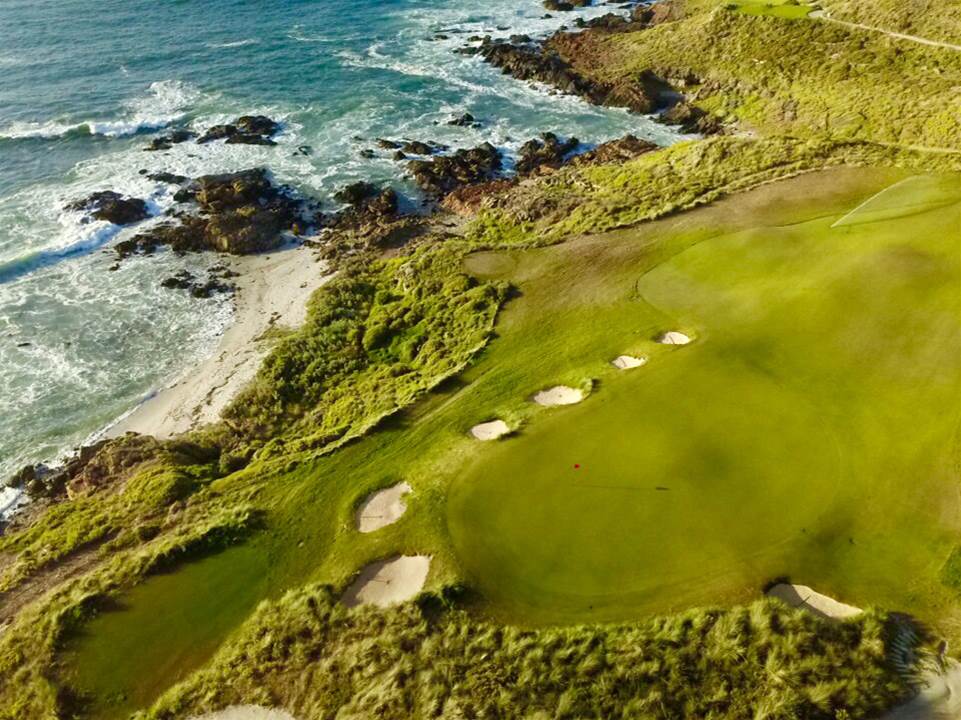 The penultimate hole of the Mike DeVries and Darius Oliver design is a magnificent hole laid along the edge of a rocky shoreline.

Seven greenside bunkers line the right edge of the putting surface, which features a large mound in the its heart and can complicate a tee shot heading for a back pin position.

With a tee laid on a rocky platform and the green covering similar terrain on the other side of a shoreline inlet, Ocean Dunes’ 4th is about as close as you will ever get to the sea on any course in Australia. With waves crashing into the rocks between you and the green, it adds to the unforgettable experience of playing the hole. 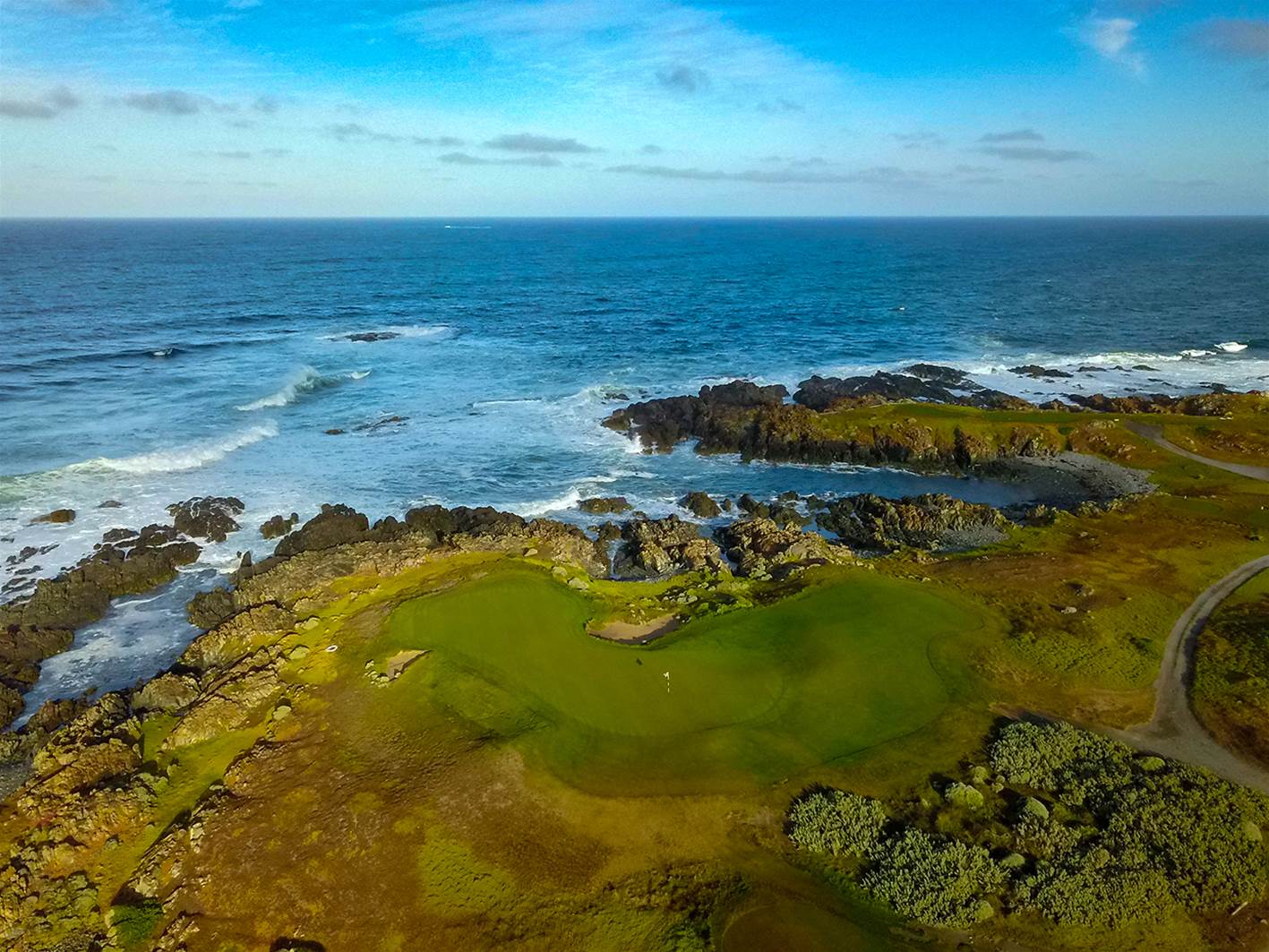 The Southern Ocean is a mighty hazard that can only be avoided by a well-struck tee shot here. Then there are the two deep bunkers short left, and one right, of the putting surface. If you can’t get your tee shot all the way onto the green, aim right and let the sloping ground help you out.

The crowning glory of the little nine-hole course at Port Arthur requires one thing – a well-struck short iron (usually) is needed to carry a 100-metre wide clifftop chasm to safely reach the green on the other side.

Take a few moments to drink in the view before trekking to the green.

A visually striking one-shotter that offers Barilla Bay as a picturesque backdrop. The hole drops some 30 metres from tee to green and is well exposed to the wind.

Once you reach the 13th tee, elevated in the sand dunes, the test that lies ahead is fully revealed. It is a challenge that doesn’t include bunkers. The green is surrounded by mounds and hollows, making any chip shot recovery a tough one.

This is such a loveable, short par-3. Teeing off under a canopy of native greenery, the hole plays downhill to an elongated green with cavernous, rocky trouble left and is sheltered by a large sloping mound to the right. 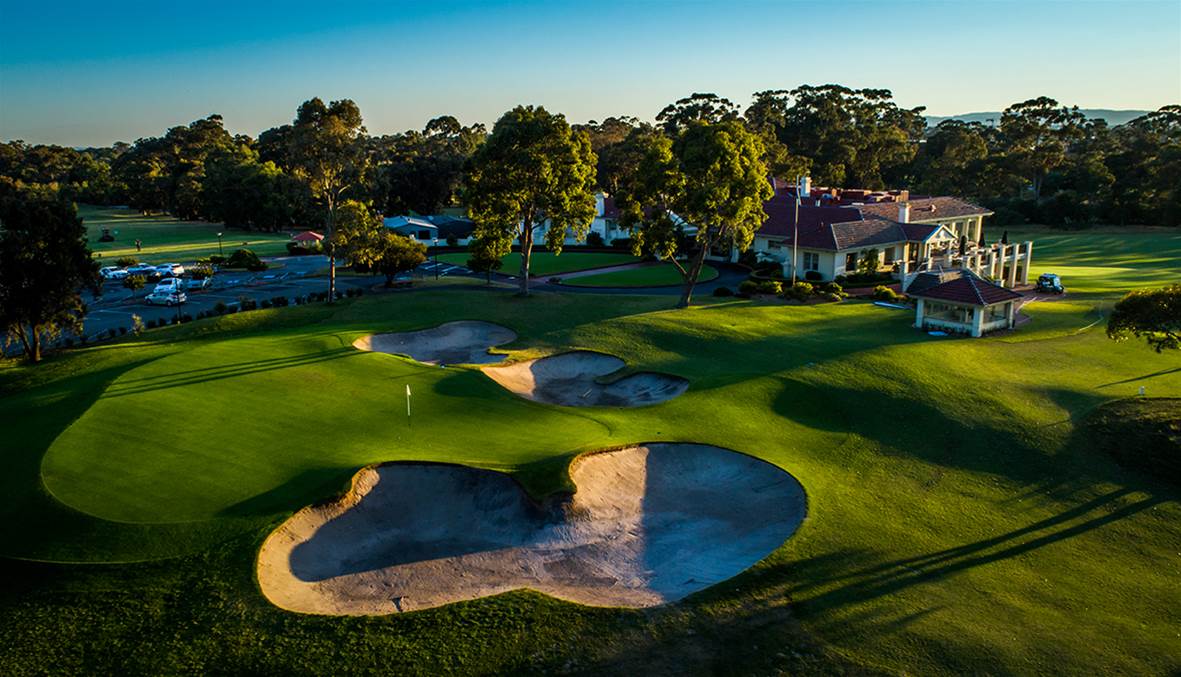 A wonderful strategic par-3 riddled with pitfalls for the miscued tee shot. A huge bunker lies front left of the almost triangular-shaped green, while two more bunkers right cut into the edge of the putting surface. An incorrect club selection leading to a shot flying long leaves a very difficult chip to any pin position.

From the tee, the diamond-shaped green deceptively appears as if it is surrounded by sand. While the bunkers offer a stern test to saving your par, missing the green long presents an even tougher challenge with a steep drop off feeding balls into the rough.

Club selection can vary between a 4- and 8-iron depending on the conditions of the day, which makes hitting the long, narrow and heavily-bunkered green a stern test.

When Dan Soutar created Kingston Heath back in 1925, he used the 10th hole – located right in the middle of the course – as his design starting point. The narrow green is lined with sand on both sides from the front to halfway back, where a ridge runs through the green. The ideal tee shot here should land before the ridge, as the putting surface slopes down from the ridge to the back of the green, bringing a steep drop-off into play. 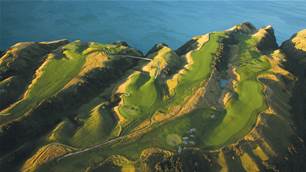