The view from the tee is deceptive as it almost looks like the waters of Bass Strait are not far behind the green, but they are almost a kilometre away. While the view is terrific, the slopes and surrounds of this green complex offer a lot of fun.

The 8th is an elevated, exposed par-3 that often plays into a headwind. A shot falling short of the very wide green, will either roll well back down the fairway or to the bottom of one of four deep bunkers front right. Making par from here is almost impossible. Set against a Bass Strait backdrop and laid on stunning topography, the 7th requires precise club selection hitting into a massively wide green. Any tee shot hit short, long or left of the green can be waved goodbye into the scrub. A spine running through the green divides the putting surface in two, adding to what is already an unforgettable hole.

Tony Cashmore’s Beach Course design exposed some beautiful natural holes that required very little earth-moving during construction. The downhill 12th seemingly just had the grass mown and pits dug for bunkers. There are bumps and hollows all around the putting surface that complicate every chip shot. This tiny offering is laid along a sand dune ridge with a relatively small green and pot bunkers lying left and long. In between these bunkers are steep, manicured run offs down to long fescue grass.

The uphill 7th tempts you to fly your tee shot right at the flag, especially when the hole is cut beyond the sand that wraps from the front around the right edge of the putting surface. The best play here is to take aim at the small entrance, between bunkers, into the green and watch as the left-to-right slope feeds the ball closer to the hole. 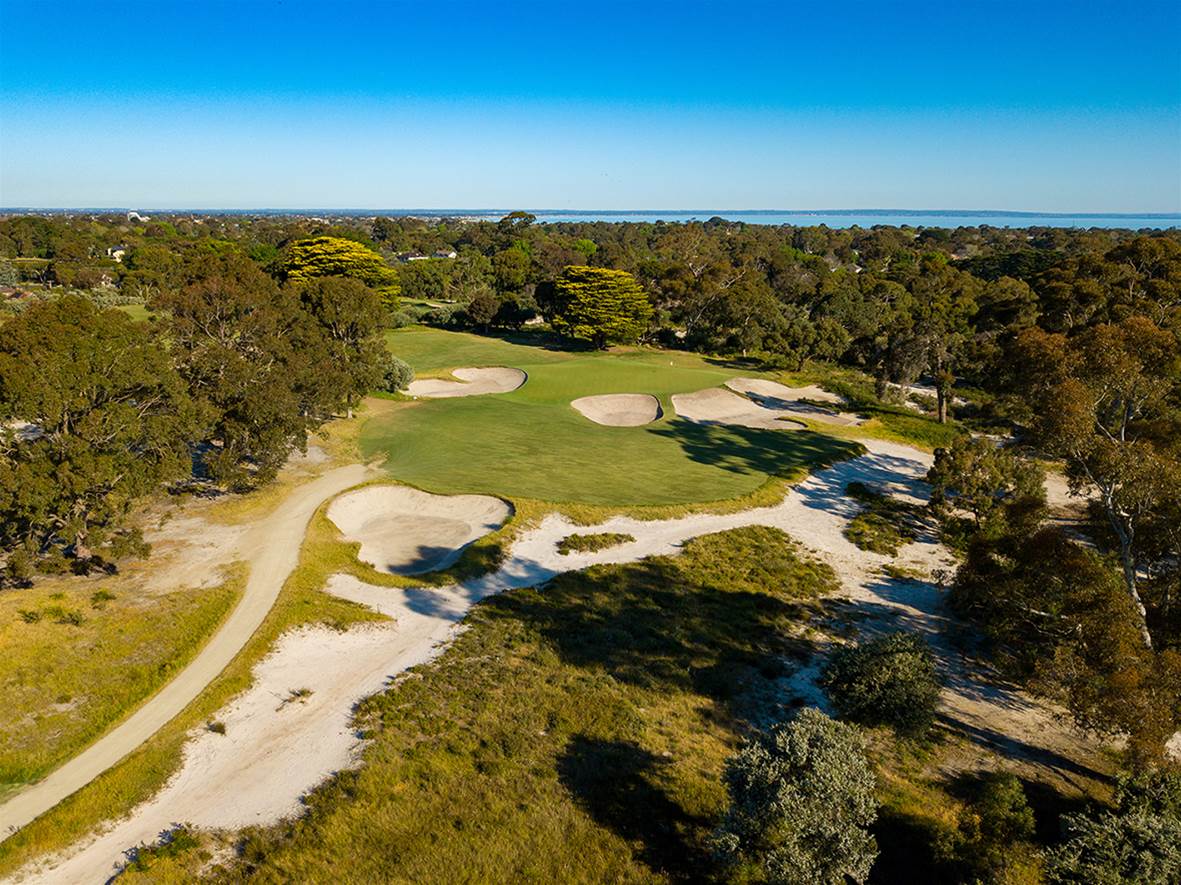 The testing run back to the clubhouse starts with this long uphill one-shotter. A seemingly endless scheme of bunkers lines the left of the hole and halfway along the green’s edge. Another bunker right is almost obscured from view as you stand on the tee considering your options.

Fine examples of expansive Melbourne Sandbelt bunkering set the scene on this hole. The deep, narrow green is well protected short left and right by bunkers, but it is the steep slopes that repel balls away from the putting surface that can cause problems. The late, great Peter Thomson once rated this par-3 in his top 18 holes in the country. The diagonally sitting green demands a perfectly controlled left-to-right shot onto the dramatically contouring putting surface. The huge bunker at the front of the green is another fine example of the creative minds of Alex Russell and Mick Morcom and has changed very little with the recent redesign of the course.

A short par 3 with plenty of teeth, it is very important to try and find the right level of this three-tiered green. Use the multiple back stops for each tier to your advantage and leave yourself below the hole. Arguably the coolest green complex to be found at Bonnie Doon.

There is a hint of Augusta National’s famous 12th hole in the look of this beauty, with water and sand short of the green, as well as more sand through the back. Only when your tee shot thumps into the putting surface is it time to breathe a sigh of relief. There are so many high-quality short par-3s showcased in these pages, and this diminutive hole is one of the best of them. Set at the base of a rocky cliff, the angled green is large with plenty of sloping ground in different directions. A terrific par-3 played along the bank of a creek that marks the beginning of the famous Hunter River. From the slightly elevated tee, all the trouble can be seen … creek to the left of the putting surface, mounds and deep bunkers to the right.

Coming late in the round, this short downhiller can easily be dismissed as a pushover. But missing the heavily bunkered green will leave a difficult recovery shot onto the kidney-shaped putting surface.

The biggest question this par-3 asks is “what club are you going to hit”? A green bound tee shot is all carry over wetlands, while there is plenty of room left of the water hazard to take a conservative line. A bunker through the back of the putting surface will snare the player who takes too much club.

Stretched to 124 metres from the tips, the hole plays even longer when the flag is near the back edge of the 26-metre deep green.

With the beach just beyond the green, a high tee shot here is exposed to the wind bringing surrounding hollows and deep bunkers left, right and short into play. The terraced teeing areas are elevated high above the green, leaving no surprises of what lies ahead. A creek cuts across the hole well short of the green, which is protected by a lone bunker short left and another two to the right. Take note of the wind affecting the flag to help make your club selection on the tee surrounded by shrubs and tall trees.

A spectacular long par-3 hole demanding a carry over the edge of a lake to an elevated green. Any tee shot finishing beyond the flag will leave a tough downhill chip and putt on a traditionally quick putting surface, while pulling up short will finish in sand or on a
steep upslope.

Easily the toughest par-3 to be found along the entire stretch of the Murray River.

Taking aim at the green involves a long water carry to reach the safety of the putting surface. Two bunkers wedged between the green and the lake catch the mis-hit, while
four bunkers lining the left of the hole ensure you need to be precise with a conservative playing line. A spectacular one-shotter with the tee and green perched precariously on either side of a cutting in the high cliffs on the edge of the Pacific Ocean.

The massive sea cave that lies directly beneath the green adds another memorable element to the tee shot, which must carry the gap between the cliffs to find the small green that lies beyond two pot bunkers. A simple hole, framed by dense stands of gum trees and played from a slightly elevated tee to a beautifully-bunkered green. What makes this better than most par-3s is the deception it inflicts on the tee shot. The breeze often differs in strength and direction from tee to green, which then brings the two deep bunkers in front of the green into play.