After more than 10 months and a series of cancellations and postponements due to COVID-19, USGA championships returned on Monday with Round 1 of the 120th US Women’s Amateur at Woodmont Country Club in Rockville, Maryland.

Rachel Kuehn and Riley Smyth, both playing in their first Women’s Amateur, carded four-under 68s, weathering long rough and fast greens to lead the way as Hurricane Isaias barrelled up the Eastern Seaboard, ready to make landfall. Because of a two-hour and 16-minute weather delay on Monday, play was postponed due to darkness with two golfers still on the course.

Kuehn, 19, of Asheville, N.C., birdied six of her first 11 holes at Woodmont, continuing the torrid play that led her to victories in the North & South Women’s Amateur in Pinehurst on July 18 and the Ladies National Golf Association Amateur Championship on July 29.

“I feel in control over the golf ball,” said Kuehn, a sophomore at Wake Forest University whose older brother Corrie is caddying for her this week. “It's just a confidence thing, and I'm putting pretty well right now. I've been glad to be able to put myself in position to make some birdies and then being able to convert some of those.”

“That putt really got my day going,” said Smyth, a junior at the University of Virginia. “It built up a lot of confidence in my putting and most of my birdies came from some pretty good putts.”

“There was extra pressure, extra nerves, especially with the whole year that's been going on. It's been a long wait to get here, but I'm happy with how I did today and how I handled those first-round nerves.” – Defending champion Gabi Ruffels

Kuehn and Smyth are two of 51 competitors playing in their first US Women’s Amateur this week, which equates to just under 40 percent of the field. But don’t confuse a lack of experience with an inability to make a deep run at Woodmont.

“It was definitely nerve-wracking at the beginning,” said Smyth, who was runner-up at both the CGA Carolinas Women's Amateur and Women's Match Play in 2019. “I was trying to let the experience take over my mind and just let that be only thought.”

Defending champion Gabriela Ruffels, who played with Kuehn, opened with an even-par 72. Her early birdies on Nos. 3 and 6 were offset by two bogeys on the inward nine.

“There was extra pressure, extra nerves, especially with the whole year that's been going on,” said Ruffels, who beat Albane Valenzuela in last year’s championship match. “It's been a long wait to get here, but I'm happy with how I did today and how I handled those first-round nerves.”

Maria Fernanda Escauriza carded a bogey-free, three-under 69 on Monday, hitting 15 of 18 greens in regulation. The 21-year-old hasn’t had the opportunity to practice much this summer because many golf courses were closed in her native Paraguay and all tournaments were cancelled. She arrived in the United States on July 29 and the US Women’s Amateur is her first event of the summer.

“There was only one flight back [to the US] last week, so I had to come on that one,” said Escauriza. “My first priority is to make the cut. I like playing match play, so hopefully that helps me a lot.”

Escauriza was joined at three under by Rachel Heck and Megan Schofill. In total, 14 players are under par at this point, including 2019 Women’s Amateur semifinalist Megha Ganne and 2019 quarterfinalist Aneka Seumanutafa, who both opened with one-under 71s.

Due to the forecasted arrival of Hurricane Isaias overnight, which is expected to drop upwards of four inches of rain in the Washington, D.C., metro area, play has been postponed for the entirety of Tuesday and is scheduled to resume on Wednesday morning. 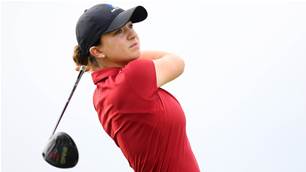 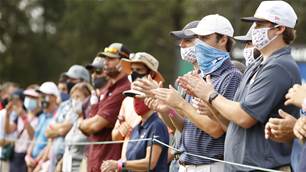