Fan based chanting comes in all shapes and sizes, from the good natured ‘Ole, Ole, Ole’ of the European supporters at the Ryder Cup to the cat calling and drunken buffoonery of the 16th hole at the Phoenix Open.

Then somewhere in the middle lies what we will see at this week’s LPGA event, the Walmart NW Arkansas Championship Presented by P&G.

Sure, the event title is a mouthful but it’s child’s play compared to the oral gymnastics required to engage in the tradition of ‘Hog Calling’ (not a misprint) at the Pinnacle Country Club’s 17th hole this week.

It’s unclear when this particular ritual started but there is no question it is now as much a part of tournament week as the trophy presentation on Sunday afternoon. The frankly undignified act of Hog Calling requires the ‘caller’ to raise their arms and loudly chant ‘Wooo’ followed by ‘Pig. Sooie’ as they bring their arms down.

It’s bizarre and unorthodox (unless you attend nearby Arkansas University, apparently) but it’s caught on at this tournament and certainly gives the event a point of difference.

Many in the field play along with the crowd, some even going so far as to don the ‘Hog Hat’ as they play the par-3 penultimate hole.

Lydia Ko endeared herself to locals by doing just that on her way to victory in 2016 and will again be among the players to watch when the tournament gets underway this Friday.

DEFENDING CHAMPION: Austin Ernst closed with a 63 in 2020 to reach 20-under and claim the title from Anna Nordqvist by two shots.

COURSE: If you look hard enough you can always find an interesting tid-bit about a golf course.

In the case of Pinnacle Country Club, it comes in the form of a par-5 holding the title of most difficult hole on the course.

The 14th is a 570 metre beast from the back tees so it’s no surprise it’s ruined more than a few scorecards though this week’s field will be relieved to be playing from a more friendly 490 metres.

Pinnacle’s ‘signature’ hole comes at the next, an island green par-3 with three greenside bunkers keeping the player on their toes.

Originally designed by the late Don Sechrest in partnership with former Tour player Bruce Lietzke, the course underwent a redesign in 2009 by Randy Heckenkemper.

A product of the golf boom of the late 80’s and early 90’s, the course was originally called Champions Club and opened in 1990 surrounded by a high end residential real estate.

Given the target market it is little surprise the course offers little resistance to scoring for players at this level.

Only once in its 14-year history has the winning total not been double digits under par for 54-holes and Nasa Hataoka’s tournament record 21-under in 2018 is testament to the scoring opportunities here. Lydia Ko full embraced the crowd activity at the 17th hole in 2016 on her way to victory. PHOTO: Jamie Squire/Getty Images.

PLAYERS TO WATCH: Expect a shootout this week with seven of the world’s top-10 making the trip to Arkansas, including last week’s winner Jin Young Ko.

The World No.2 will rightly start favourite but with seven previous winners also teeing up she will need to be on her game.

This marks Ko’s third appearance, but Pinnacle Country Club hasn’t been to her liking in the past with a T19 and T9 on her resume.

While many will be following the fortunes of Jin Young it is another Ko worth keeping an eye on this week in the form of 2016 champion Lydia.

Rejuvenated in 2021, the New Zealander is making her first start since a disappointing T29 at the AIG Women’s Open and she will be both fresh and motivated to finish the 2021 season strong.

The course and event are clearly a favourite as it has been on her schedule every year since 2013, and while T9 is her best since her 2016 victory those years also coincide with her well-publicised ‘slump’.

On a course she likes in a year where she has found her game, Ko looks a good proposition this week.

There is no shortage of other players who can make a case in Arkansas including our own Minjee Lee.

Like Ko, she has been a regular at this event since joining the LPGA and has only been outside the top-10 twice in six starts.

A T5 result at Carnoustie two weeks after capturing a maiden major title at The Evian ended a hectic month of golf for Lee and a four week break since will have been welcomed. 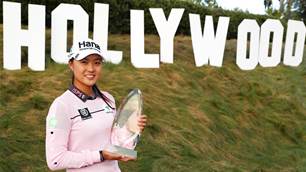