The PGA Tour remains in Georgia this week for the 11th instalment of The RSM Classic at Sea Island Resort. Jason Day leads the Aussie charge and will be eager to make amends after missing the cut at the Masters.

COURSE: The 6,451-metre par-70 Seaside Course at Sea Island Resort opened in 1929 and was redesigned by world-renowned course architect Tom Fazio in 1999.

The 6,456-metre par-72 Plantation Course, meanwhile, was reworked by tournament host Davis Love III (who will be missing from the field this week due to injury) and his brother Mark in 2019.

The Seaside Course will be used exclusively once the halfway cut has been made.

Former World No.1 Jason Day left Augusta National with a bad taste in his mouth last week, having missed the cut for just the second time in his career with rounds of 70 and 78.

The Queenslander is set to make his first appearance at the RMS Classic – along with the likes of Shane Lowry and Justin Rose – and will be hungry for redemption. Day hasn’t won on the PGA Tour since claiming his 12th career title at the Wells Fargo Championship in May of 2018. But he has shown promising signs in recent times, posting four consecutive top-10s in July and August, including his share of fourth place at the US PGA Championship.

The 35-year-old American was also runner-up at Sea Island in 2011, finished third in 2018 and returns to the resort after sharing 10th place at Augusta National last week.

Simpson hasn’t been hitting as many greens as he would like so far this season and is currently ranked 157th on Tour in that regard, compared to an impressive 11th at the end of 2019/20. But his short game and putting have both been firing lately – two crucial ingredients for success at Sea Island, where he has recorded four top-10s from eight starts.

If Simpson can get his approach play back to its best, he should be right in contention come Sunday. 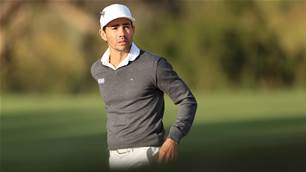