It was one of the more emotional events of 2020 when popular Englishwoman Mel Reid broke through for a long-awaited maiden LPGA victory at the ShopRite Classic in New Jersey.

The then 33-year-old survived a tense final round battle with rising American star Jennifer Kupcho, a run of four birdies in a five hole stretch midway through the final round proving the difference.

DEFENDING CHAMPION: Marking just the second time the event was played over 72-holes, Mel Reid ended the week at 19-under-par, two ahead of Jennifer Kupcho and three in front of Jennifer Song. COURSE: The Seaview Golf Club is home to two 18-hole layouts with the tournament host – the Bay Course – considered by most to be the pick of the two.

Designed by Donald Ross in conjunction with Hugh Wilson, of Merion fame, what the Bay layout lacks in length it makes up for in strategy and tricky green complexes.

While best known in recent years as host of this LPGA event, a composite Seaview course was also the venue for the first of Sam Snead’s seven major wins.

Snead defeated Jim Turnesa for the PGA title in 1942, when it was still matchplay, thanks to a 60 foot chip-in on the 35th hole of the final.

Short game will also be key for this week’s field with the small greens meaning lots of chipping and pitching combined with intricate internal contouring on the putting surfaces putting a premium on spin and flight control. Speed control with the putter will also be at a premium.

Wind is almost always a factor at Seaview given its proximity to the Atlantic Ocean, Karrie Webb’s 2013 victory a memorable one in brutal conditions.

The Australian’s winning total of four-under for the 54 holes is the highest in tournament history.

The front nine at Seaview is considered the more difficult of the two, the easier back nine generally ensuring exciting finishes to the tournament as players are able to make a charge.

PLAYERS TO WATCH: It will be a list of the usual suspects here as another strong field gathers for the second last regular season event on U.S. soil for the year.

Last week’s winner Nasa Hataoka might fancy her chances of going back-to-back after a fourth place finish last year while defending champion Mel Reid will be looking for some good memories coming off a missed cut last week.

Former winners Lexi Thompson (2019) and Stacy Lewis (2014) both come into the week in good form after top-10 finishes in Arkansas but it is last year’s runner-up, Jennifer Kupcho, who will be the player to watch. Last year's runner-up Jennifer Kupcho is one to watch this week, with some good lead-in form. PHOTO: Charles McQuillan/Getty Images.

While yet to capture a maiden LPGA title, the 24-year-old has done everything but since joining the Tour in 2019.

A former standout amateur and winner of the inaugural Augusta National Women’s Amateur, she has proved a consistent performer at the professional level with five top-10 finishes already this season.

That’s an anomaly at this level and Kupcho is unlikely to repeat those sorts of mistakes on a course where she has such strong positive memories.

The windy conditions will suit her strong ball flight and at 10th in the greens in regulation category the small greens will favour one of her strengths. 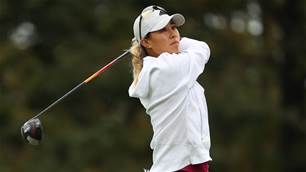