The fifth-year Georgia Tech senior rallied from an early 5-down deficit to defeat Southern Methodist University rising junior Charles “Ollie” Osborne, 20, of Reno, Nev., 1 up, in the 36-hole championship match.

It was Strafaci’s fourth consecutive match to be decided on the final hole. This time, he laced a 4-iron from 245 yards to 25 feet to set up a two-putt birdie, the 25th of the match between the two finalists. When Osborne, who pushed his five-iron second from 212 yards to the right of the green, failed to convert his birdie from 18 feet, the match was over.

An emotional Strafaci embraced his father/caddie, Frank Jr., his mother, Jill, and his older brother, Trent. He also was congratulated by 2021 USA Walker Cup captain Nathaniel Crosby, himself the 1981 US Amateur champion, for earning a place on the team that will face Great Britain and Ireland May 8-9 at Seminole Golf Club in Juno Beach, Fla., just a short drive from Strafaci’s home. There were tears of joy and several primal screams of excitement, knowing he had fulfilled a lifelong dream of winning America’s oldest amateur competition and play in a Walker Cup, something his decorated grandfather never achieved.

“That's why I always wanted to be the first Strafaci to make a Walker Cup,” said Tyler. “It's been a rough couple of years because I've been pretty close to it, and now that I'm on that team, I feel like I've made [my grandfather] proud, and I feel like it's just unbelievable. I mean, it's something I've dreamt about and something that my father has told me about, stories about my grandfather. So it's awesome.”

Strafaci’s victory also gave the Yellow Jackets a second consecutive US Amateur champion – and fourth overall – after Andy Ogletree, who missed the match-play cut this week, hoisted the Havemeyer Trophy in 2019 at Pinehurst Resort & Country Club. It is the first time two different players from the same university have captured this prestigious championship in consecutive years. Bob Jones (five victories) and Matt Kuchar (1997) are the other two Georgia Tech players to have won the US Amateur.

The five-hole comeback also nearly matched what matched what Tiger Woods accomplished in the first of his three consecutive victories in 1994 when he rallied from 5 down after 13 holes to beat Trip Kuehne at TPC Sawgrass.

“I feel like I've made [my grandfather] proud, and I feel like it's just unbelievable.” – Tyler Strafaci

For a second consecutive day, the conditions at Bandon Dunes were nearly perfect. For all but the last few holes, the course was baked in sunshine with just a gentle breeze from the southwest. Late in the afternoon round, however, the course was enveloped in fog from the marine layer, creating an additional intangible for the two finalists.

But the quality of golf was more than worthy of a championship match as the two finalists combined for 25 birdies and one eagle, with the usual match-play concessions.

No birdie was bigger for Strafaci than on 18, a hole that has been kind to him since his Round-of-16 victory over Seguno Oliva Pinto, when Pinto’s caddie committed a Rules breach that gave Strafaci a 1-up win. A day later, he came to the par-5 hole 1 up on 2016 US Mid-Amateur champion Stewart Hagestad and converted a 3½-foot par putt to reach the semifinals. On Saturday, Aman Gupta erased a 4-down deficit to tie the match on 17, only to take three shots to extract his ball from a fairway bunker, leading to a conceded birdie for Strafaci.

“That was the first time in my life where I told myself … [I’m] going to hit a winning shot,” said Strafaci about his approach on 18. “But I actually hit a winning golf shot when it mattered the most under the most pressure in amateur golf, because under those circumstances, it's foggy, it's different than how I was playing in the first 30 holes, so my distances were a little off.

“[I told myself] you're going to hit it close by hitting the best 4-iron of your life, and I stepped back, and I closed my eyes and put my hands over my eyes like that, and I said, ‘This is your time to hit a winning shot. Go get it.’ I've done it a bunch of times back home, and I knew I could execute it, and I trusted myself, and I did it.”

Osborne came out of the gates in the morning 18 on fire, registering three consecutive birdies – two of which won holes 1 and 2 – and upping his margin to 5 up with birdies on Nos. 10, 11 and 12, the latter a tee shot to 3½ feet that was conceded.

Then Strafaci got on a roll, winning No.13 with a birdie (his eagle putt from 48 feet just nicked off the flagstick), 14 with a three-foot birdie putt and 15 with a nine-foot par putt. An eight-foot birdie on 17 trimmed the deficit to one hole, and when both players birdied 18, the morning round ended with Osborne holding a precarious 1-up lead.

“You're kind of excited when you're 5 up but you know you've got a lot more golf to play, and then obviously he came back,” said Osborne, who was bidding to become the fifth SMU golfer since Hank Kuehne in 1998 to win the US Amateur. “Like you kind of just go up and down throughout the day, you're excited, you're a little down. I tried to stay mellow the whole day, and it was a good match.” 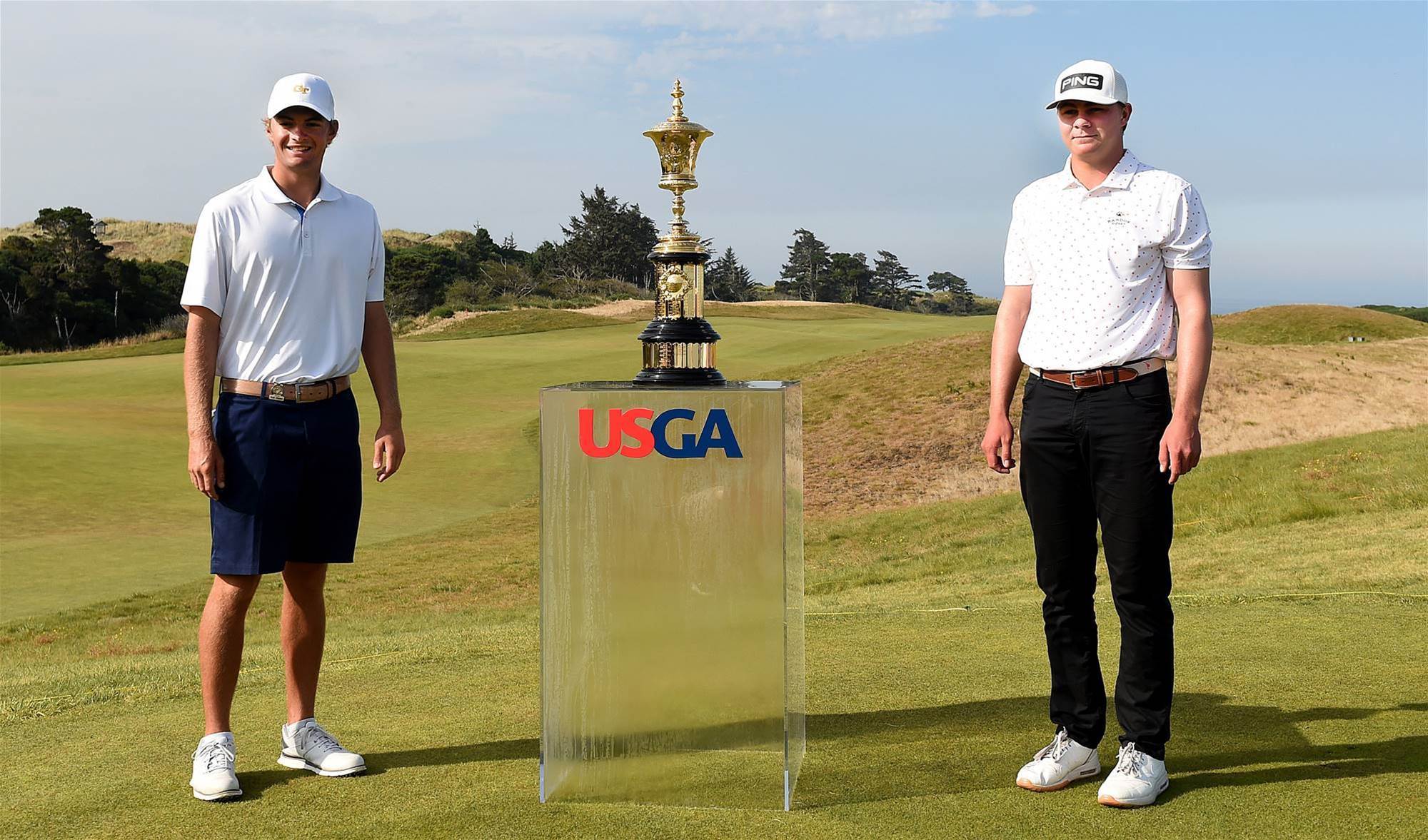 Strafaci continued his hot putting early in the afternoon round, making a 30-foot birdie on the par-3 20th hole to tie the match, and holing a 34-footer from just off the green for another birdie to match Osborne’s four at the par-5 21st. He took his first lead of the match on the par-4 25th, converting an 18-footer.

It appeared Strafaci might go 2 up thru 28 holes, but he shockingly missed a two-foot birdie. Osborne tied the match two holes later with a two-putt birdie on the par-5 30th. Strafaci followed by lacing a perfect drive with a 3-wood on the 314-yard, par-4 31st hole through the fog that he thought was too far right. It kicked off a dune and stopped six feet from the hole. Osborne, however, made him work to win the hole when he drained a 20-foot birdie putt. Strafaci stepped up and converted the eagle – the only one of the match – for a 1-up lead.

At the par-3 33rd, Osborne decided to go with a 7-iron – he had hit 8 in the morning when the temperatures were a bit warmer – and missed the green long and left into the penalty area. It took him three shots to get to the putting surface and he eventually conceded Strafaci’s par putt.

But the No.460 player in the World Amateur Golf Ranking, who showed he is a fighter by recovering from an opening-round 77 at Bandon Dunes in stroke play to shoot a 64 at stroke-play co-host Bandon Trails just to qualify for match play, wasn’t done battling. He won the par-4 34th hole with a conceded birdie after Strafaci’s second from a fairway bunker sailed over the green into the penalty area. Then on the par-4 17th, Osborne hit a beautiful approach shot through the fog to a front-right hole location. Strafaci put his approach shot from the fairway into the penalty area short and right of the green. His fourth shot also found the penalty area and he conceded Osborne’s birdie putt to send the match to the 36th hole all tied.

What the Champion Receives …