Cameron Smith looks the last distant hope to bring The Open Claret Jug to Australia after 28 years, with his credentials being backed in his increasingly forbidding Championship quest by his admiring mate Adam Scott.

On another underwhelming day for the Aussie challenge amid birdies galore at Royal St. George's, Smith shot an uneven three-under par 67 to move to four-under for the Championship and just about keep inspired leader Louis Oosthuizen in telescopic sight.

With the 2010 champion on 11-under after a 65, last year's US PGA winner Collin Morikawa on nine-under and Jordan Spieth a shot further back, Smith – T17 after two rounds –  knows it's still a tall order for him to chase down such illustrious front-runners.

Yet the likeable, laid-back Queenslander just shrugged as he said: "Yes, I guess (I'm in the hunt).

"The first two rounds are out of the way now - now it's head down, arse up and try and get as high up the leaderboard as you can!

"If we keep getting (favourable) conditions like this, it's probably going to take something close to double-digits (under-par) so we'll try and get as close as we can tomorrow." 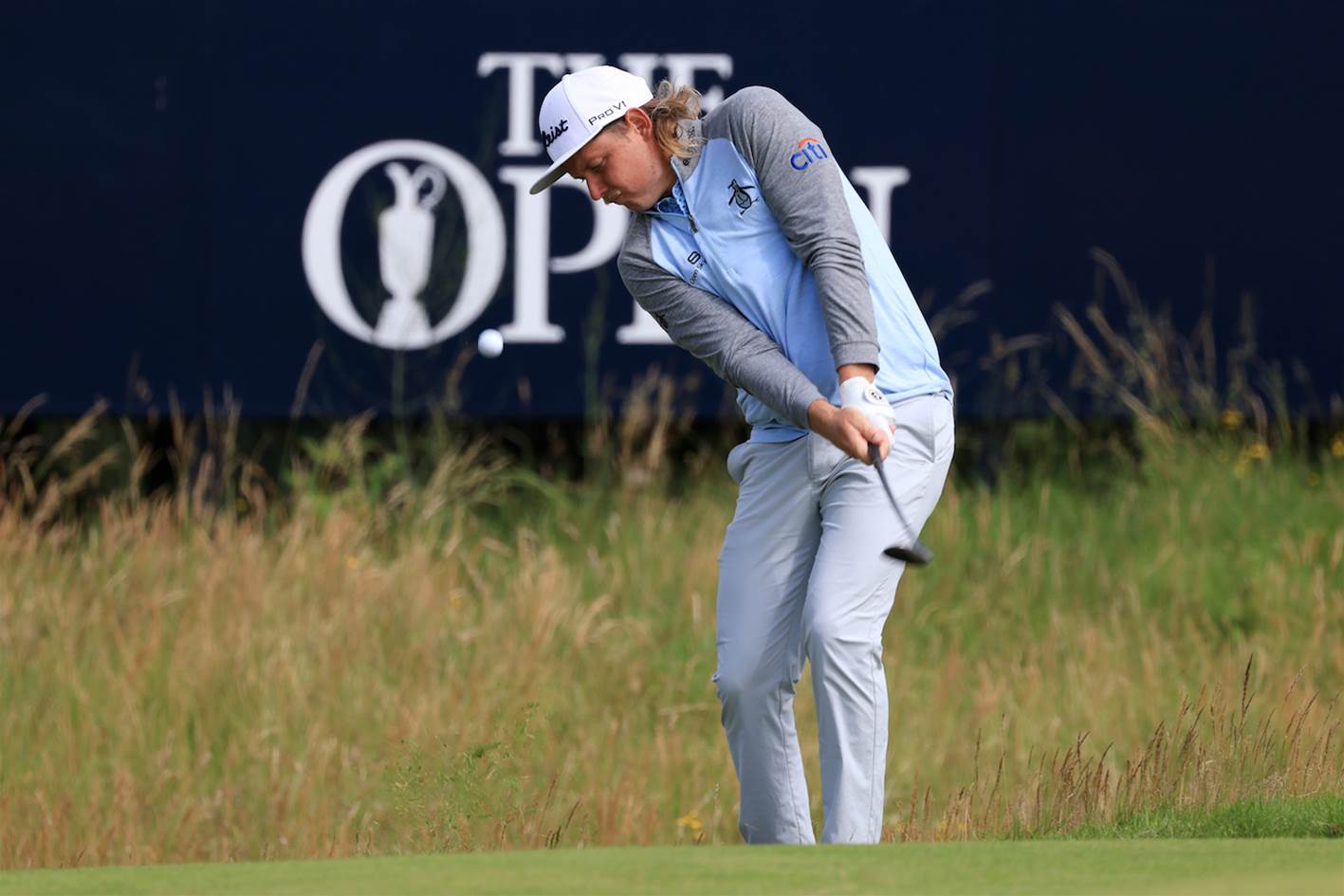 Cam Smith heads into the weekend seven shots from the lead but still "in the hunt". PHOTO: Getty Images.

It was hugely disappointing that Scott – celebrating his 41st birthday – was the only other player among the 11 Australians in the field who survived the halfway cut, with his second round 66.

Yet, at just one-under, even the former Masters winner accepts he really will now need a "miracle" to contend for his second major, even if he shoots two more 66s.

He had encouraging words, though, for Smith's prospects over the weekend.

"Cam is playing so well and is starting to play consistently so well in the big championships," said Scott of last year's Masters runner-up. 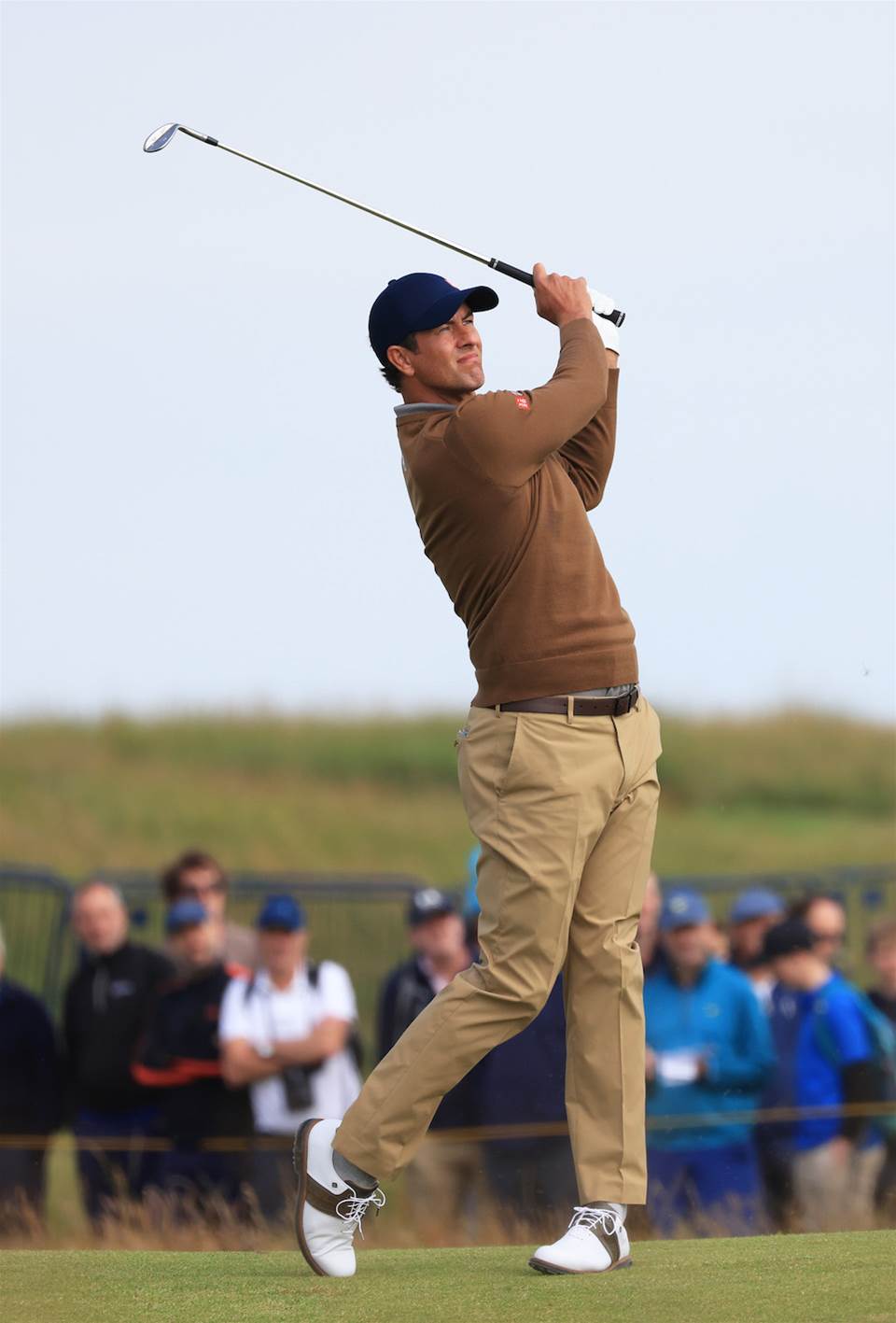 "I've got to know him a little bit and his personality really suits tough events generally.

"Not just a tough course, but the big stage; he's got a lot of heart and a lot of fight in him and I think he probably could be easily overlooked until he wins one – which could be soon."

Not this weekend, surely?

RIGHT: Adam Scott shot a four under 66 to join Smith as the only toher Aussie playing the weekend. PHOTO: Getty Images.

Smith reckons he'll be wearing his usual maroon on Sunday and wonders if Queensland's State of Origin win this week might have been a happy omen.

"I actually slept in on Wednesday and watched the boys play before coming out for a late practice round," explained Smith.

"Yeah, really proud of the boys. They brought some pride back to Queensland. Really nice to see. Put a smile on my face."

As did the seven birdies that he accumulated, but not the four bogeys which went alongside on a day where breezes rather than gusts offered the course precious little defence.

Elsewhere, the only traffic jam on view appeared to be the parade of Aussies trekking back to their hotels to pack their bags.

Marc Leishman snapped his putter in two in frustration during his second round because he couldn't sink anything, then made three birdies using the blade of his wedge to shoot a 67 – but all in vain as it still left him one short of making the cut.

Min Woo Lee recorded a one-under 69 to finish at three-over in his debut major, doubtless reflecting on the triple bogey at the 15th on Thursday that effectively scuppered his chances.

So the hopes of emulating that famous 1993 triumph here now lie with the last two Aussies standing.

"There's always something to play for," shrugged birthday boy Scott. "Hopefully, I can hit it well, get hot with the putter and shoot a couple of rounds like Greg Norman once did here."