Marc Leishman has ended up drowning his sorrows with a few beers while feeling just a wee bit embarrassed with himself after snapping his putter in half in a fit of pique at during the second round of The Open Championship.

On one of the strangest days of his model pro career, the 37-year-old, famed for his mild-mannered, even-tempered demeanour, got mad with his misfiring putter on the 10th hole after an umpteenth missed birdie attempt at Royal St George's during the second round.

Bending the offending blade with his bare hands Leishman, a big bear of a man, saw it snap – something that he had never done in his entire career.

"I was probably angrier than I thought," he told AAP with a rueful smile.

"Obviously, that wasn't meant to happen. When you play a tournament that means so much to you and you're hitting it so well, I was just very frustrated I guess."

How ironic then, suddenly forced to use the blade of his wedge to putt, he sank a 15 footer to save par at the very next hole.

"It's frustrating when you've got a tournament that you love so much and you're hitting it good enough to be contending, but the embarrassment of having to putt with a wedge for the last eight holes was enough punishment." – Marc Leishman.

For the rest of the round chances that had been going astray suddenly started dropping as he holed the three longest birdie putts of his two days at Sandwich.

But at the end of a trying week, which had also seen his clubs mislaid for 36 hours in transit from America, Leishman's wedge-putt heroics over the last eight holes, and a second round 67, saw him miss the cut by one.

His punishment? Not being able to play the last two rounds in the event he so loves – and having the embarrassment of the crowd watching him putting with a wedge, wondering what on earth had happened to his putter?

The thing that annoyed him most was that he believed he could actually have been contending if not for his woes on the green that saw him take 36 putts on Thursday – the worst of any player in the opening round.

"It's frustrating when you've got a tournament that you love so much and you're hitting it good enough to be contending, but the embarrassment of having to putt with a wedge for the last eight holes was enough punishment.

"That would be the third club in my career that I've broken, but never a putter. It's pretty frustrating.

"I hit a lot of putts that looked like going in but not one did. But that's golf. It tests your game, it tests your mental strength and it got to me today."

If any one of the umpteen shortish putts he'd missed had dropped, it would have been enough to have earned him a place in the field over the weekend.

He recalled in 2015 at St Andrews he'd only just made it to the weekend on the cut line but ended up in a playoff for the title.

"I need the wind to get up," he said, desperately hoping that worsening conditions might help him make the cut. "But I'm not holding my breath. I'll definitely have a few beers this afternoon." 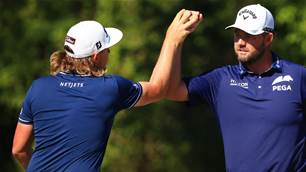