Former champion Adam Scott snapped a four-year PGA Tour title drought shortly before the COVID-19 outbreak upended the golf calendar and now the Queenslander hopes to find a way to channel that winning form at this week's Masters.

Scott, who in 2013 became the first player from Australia to win the Masters, would no doubt have felt more upbeat about his chances had the Masters been played in early April as originally planned.

"I was in good form back then in the spring, and because of all the circumstances, it's really affected my preparation and my practice, and many things since returning," Scott said on Monday during a news conference at Augusta National Golf Club.

"Hopefully the work that I have done and been able to do the last couple of months will accumulate and I'll be able to finish the year with a bang here this week."

"Hopefully the work that I have done and been able to do the last couple of months will accumulate and I'll be able to finish the year with a bang here this week." – Adam Scott

Scott was no doubt feeling good about his game having earned his first win anywhere in almost four years last December at the Australian PGA Championship. Two months later he ended a similar drought on the PGA Tour with a win at the Genesis Invitational.

But Scott has only played five events since the PGA Tour resumed play in mid-June – his best result a share of 22nd at the US PGA Championship – and even had to withdraw from a Masters tune-up event last month after testing positive for COVID-19.

The 40-year-old, who finished tied for 18th at the 2019 Masters, has yet to see how Augusta National, the only permanent home for one of golf's four majors, plays this late in the year but expects he will need to make adjustments.

"I've heard guys say that it is quite different on the course with a little bit of the Bermuda still staying around, because it is quite warm, that you have to play some shots around the greens in a different fashion," said Scott.

"I've got lots to learn in the next three days if that's the case." 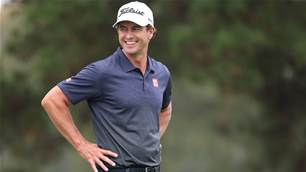