Adam Scott says he will struggle to threaten the leaders in the final round of the US PGA Championship unless he drastically improves his rusty iron play.

The Queenslander and former World No.1 began the third round at San Francisco's TPC Harding Park within striking distance of the lead but a flat, even-par 70 left Scott at two under and seven strokes off the pace.

Scott, the 2013 Masters winner, had moved to within five shots of the lead courtesy of a birdie at TPC Harding Park's sixth hole but immediately followed it with back-to-back bogeys.

The 40-year-old registered just one birdie on the back nine.

"(My iron play) is just not standing up to the test; I've missed way too many greens from the fairway, and on par 3s, and left myself scrambling." - Adam Scott.

Scott hit only seven of 14 fairways and 10 greens in regulation and was on the back foot throughout the round.

It is likely a matter of rust given the PGA Championship is Scott's first tournament since March.

"My iron play has really been struggling the last two days," Scott said.

"I can't hit it inside 30 feet and that makes it pretty hard to just expect to roll in birdies from 50 feet all day.

"I've done well not to three-putt, to be honest.

"(My iron play) is just not standing up to the test; I've missed way too many greens from the fairway, and on par 3s, and left myself scrambling."

In search of an elusive second career major, Scott said a final-round charge would require an accurate driving display given Harding Park's rough is thick and damp.

"You can only be as aggressive as hitting the fairway off the tee," he said.

"Once you're not in the fairway, you have no control out of the rough.

"My putting has been really good and I've driven it well the last two days off the tee.

"If I can hit a lot of fairways, there's a low score out there somehow if I can dial in the irons." 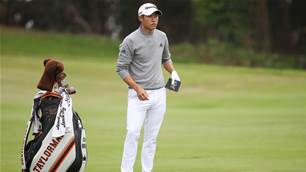 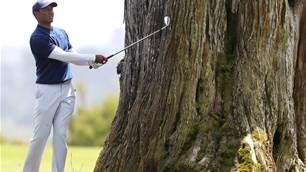