While one swing by American Xander Schauffele nearly changed the dynamics of the men’s golf tournament Sunday at Kasumigaseki Country Club, it was the 61 strokes of eventual silver medallist Rory Sabbatini that really shook the leaderboard and the chase for Olympic gold.

Schauffele ultimately emerged the winner on this hot, sunny day, clinching his golden moment with one final, gutsy par-save on the final hole for a four-under par 67 and 18-under total. But it took the mental resilience he said came by way of his upbringing, fostered by a father of German-French descent and Chinese Taipei mother, who was raised in Japan. Consider it a respectful nod to the culture of the host country, where his grandparents still live.

“I felt like for the most part of the day I stayed very calm,” Schauffele said. “I usually look very calm but there's something terrible happening inside at times. So, I was able to learn on those moments where I've lost coming down the stretch, where I hit a bad shot or a bad wedge or a bad putt and sort of lose my cool. 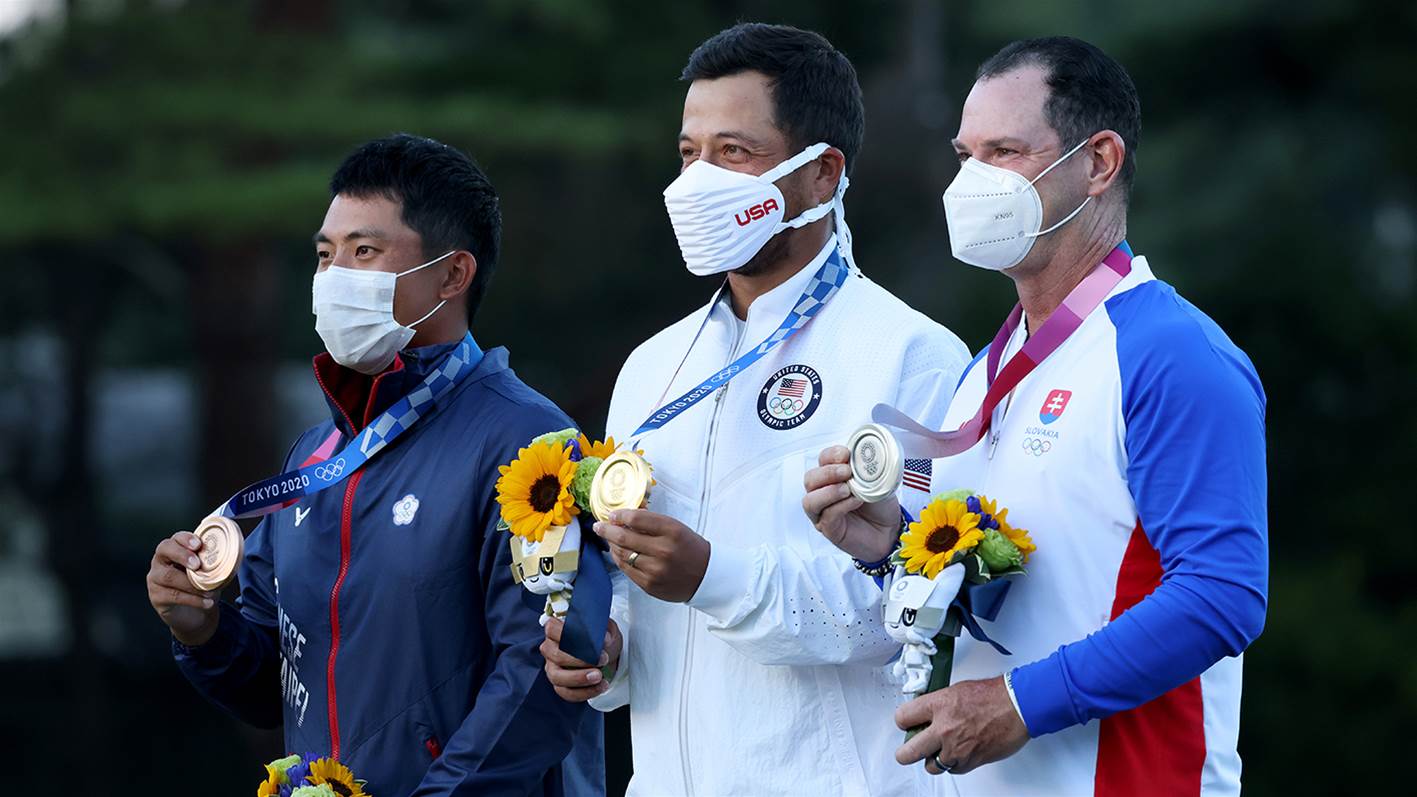 “But I felt like today I really, I thought I had a one-shot lead going into 16 or 17 and I looked at the board and I saw Rory shot 61, so that was a nice wake up call for me; thank goodness there was a board there or I wouldn't have known.

“Yeah, it was a roller coaster day for me especially on that back nine coming in and just happy I could fall back on parts of my game to sort of pull me through.”

Until that one swing on the par-5 14th hole produced a wayward drive and bogey, Schauffele remained undeterred through a scoring assault that was unfolding ahead, led by Sabbatini’s brilliant record-setting round that concluded more than an hour ahead of him.

In fact, the perfect scoring conditions led to a seven-player elimination for the bronze medal, which was finally decided on the fourth extra hole with C.T. Pan of Chinese Taipei beating Collin Morikawa of the USA with a par 4 on No. 18. Both had matched the former Olympic record of 63 Sunday to get into the playoff.

Before the late drama unfolded, it appeared to be Schauffele’s private coronation. He entered the day leading Japan’s Olympic hope, Hideki Matsuyama, by one. Then birdies on the first two holes extended his lead to three and indicated the work he had done with his father/swing coach, Stefan, the evening before had resolved some driving issues that developed in round three. 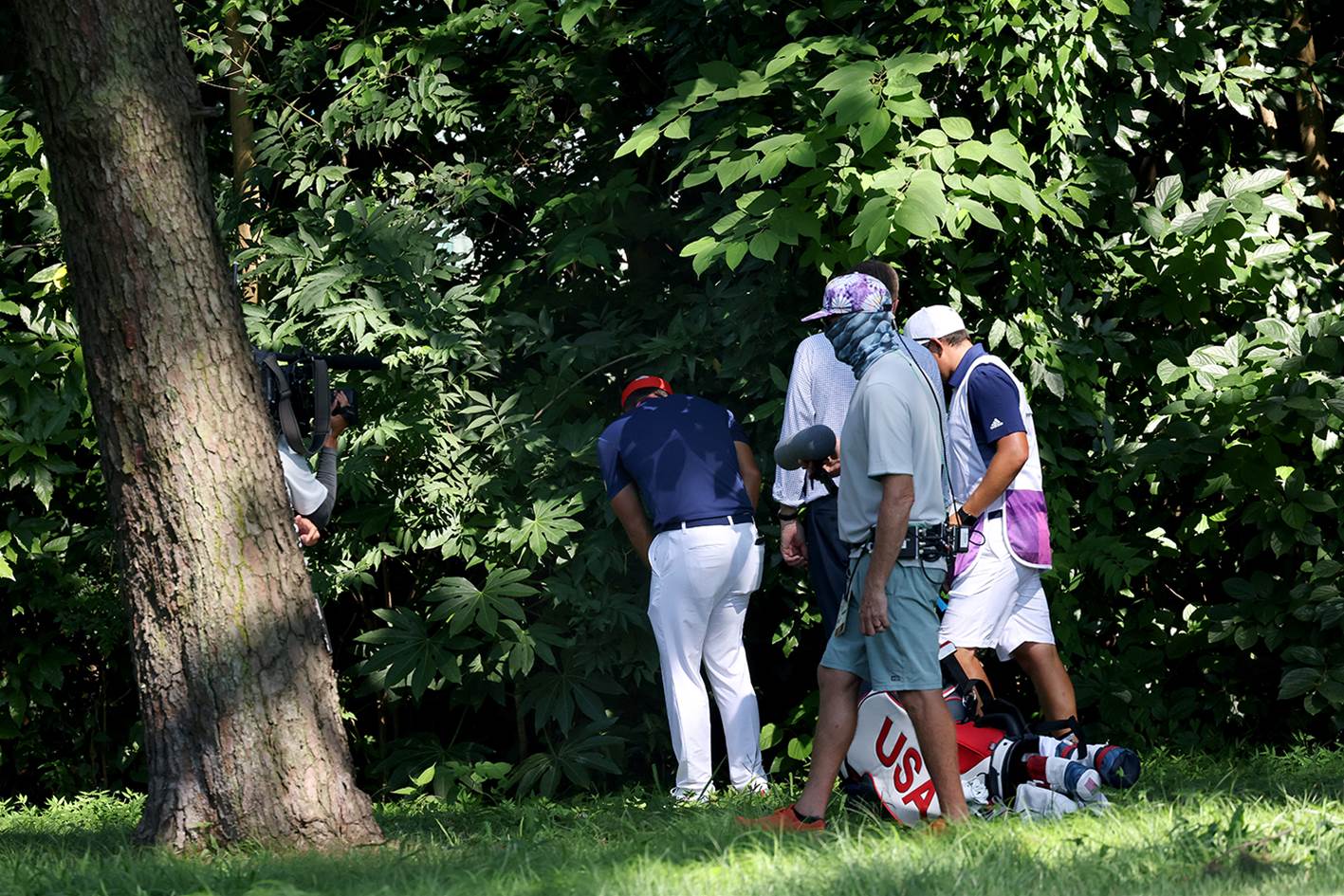 He added two more birdies and seemingly was cruising along until No. 14, where he badly pushed his drive that ended up in dense underbrush and forced a penalty drop. Schauffele managed to save bogey, but that dropped him into a tie with Sabbatini at 17-under par … and his internal battle was on.

“I was cruising pretty nice, I saw that I had a three-shot lead going into 14 and made an absolute mess of the hole,” Schauffele said. “I really tried to keep my head down from that point on and I saw the massive board on 16. So, the early putts that fell and the good shots were nice for a cushion and it was fortunately just enough for me to squeak by finishing up.”

While Schauffele had four holes ahead of him, Sabbatini, from Slovakia, was waiting with his wife and caddie, Martina, to see how it would unfold. He had done everything he could, putting together a masterpiece that consisted of 10 birdies, and eagle-2, five pars and two bogeys. The closing birdie on 18 came with an emphatic fist pump as the ball approached the hole, giving Sabbatini the men’s Olympic record by two strokes.

“I was out there today and I kept just trying to remind myself, okay, don't think ahead, don't think ahead, just enjoy the moment that you're in because you don't know what it's going to end, just enjoy every hole as it comes,” Sabbatini said. “It just seemed like every time I kind of had a hiccup out there I was like, oh, maybe this is the end of the run, but okay. And then all of a sudden, I kicked back into gear. So, it was a lot of fun and it was just one of those rare days that you have on the golf course.” 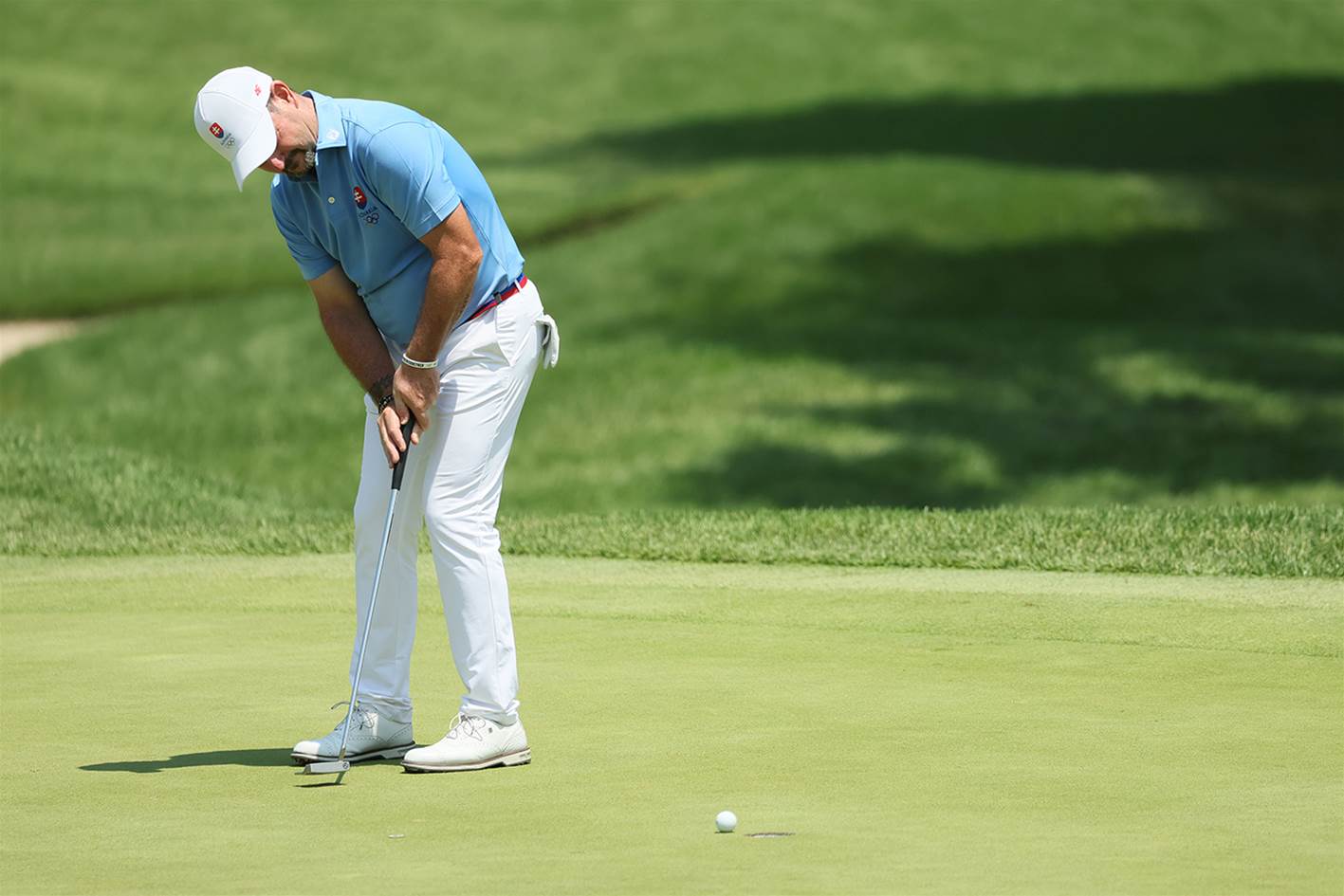 Rory Sabbatini made 10 birdies and an eagle during his closing round 61. PHOTO: Getty Images.

Schauffele finally managed to retake the lead with a birdie three on the 17th hole, which was shortened to just 305 yards. But then on No. 18, another pushed drive forced Schauffele to lay up into the fairway, leaving a wedge to the hole. Undeterred, he calmly wedged to four feet and holed the par putt.

“Well, I tell you what, it (the wait) was for a long time,” said Sabbatini, who at 45 was the oldest player in the field. “It seemed like it was inevitable that Xander was going to win and then all of a sudden he created some excitement for us. So, he definitely kind of put me back on edge waiting there at the end.

“It was fun,” he added. “He played fantastic, he's a great champion and I'm just happy to be able to stand anywhere near him on the podium.”

Once that drama was settled, it was time to settle the bronze medal winner in a star-packed field that also included Matsuyama (who shot 67), Paul Casey of Great Britain (68), Rory McIlroy of Ireland (67), Mito Pereira of Chile (67) and Sebastián Muñoz of Colombia (67). It was so large, it required splitting into two groups.

"This is my first Olympics, so I think that's the one thing I witnessed a lot this week is there's triumph and there's the heartache and we have seen it in the (Olympic) Village we have soon it in Team GB (Great Britain). Now you've seen it here on the golf course as well." – Paul Casey.

Matsuyama and Casey were eliminated first, followed by Muñoz, then Pereira and McIlroy.

“I was not able to deliver the performance I was hoping for,” Matsuyama said.

Morikawa bogeyed the final play-off hole after his approach to the 18th green plugged in the steep upslope of the front bunker. Pan holed a par-saving putt for the medal.

“Very satisfying,” Pan said. “It came as a surprise to me too. After day one, plus 3, 74, I remember I texted one of my good friends and I was like, the struggle is real. So, it's quite a turnaround for this week winning the bronze medal that I couldn't even think about it, didn't even think about it after Thursday's round. So overall that was a very happy ending.” Collin Morikawa blasts out of a plugged lie during the play-off. PHOTO: Getty Images.

Morikawa, on the other hand, thought his approach would make the green.

“It was a long four holes and I thought my shot was going to be all right and just mis-hit it,” he said. “CT played great and we had to shoot 8-under for both of us to get in this playoff for bronze. So, it sucks, but hopefully it's not a last and hopefully we'll be back in four years.” C.T Pan grabs the bronze medal with this par-saver in the play-off. PHOTO: Getty Images.

McIlroy, for one, came away more determined than ever to earn an Olympic medal.

“Yeah, it does, it makes me even more determined going to Paris (in 2024) and trying to pick one up,” he said. “It's disappointing going away from here without any hardware, I've been saying all day I never tried so hard in my life to finish third. But it's been a great experience, today was a great day to be up there in contention for a medal … certainly had a different feeling to it than I expected and yeah, as I said I'm already looking forward to three years’ time and trying to go at least one better but hopefully three better.”

“I maybe put more pressure on myself to go win this more than anything else for quite some time … And my ties here with my grandparents living here and my mom growing up here as well, there's just all these things that sort of motivated me to do better, be better." – Xander Schauffele.

Casey, on the other hand, at age 44 is unsure whether he will get another chance at the Olympics, But he made the most of this opportunity, playing his way into the final pairing after tying with Carlos Ortiz of Mexico for third.

He eloquently summed up the Olympic experience, saying, “This is my first Olympics, so I think that's the one thing I witnessed a lot this week is there's triumph and there's the heartache and we have seen it in the (Olympic) Village we have soon it in Team GB (Great Britain). Now you've seen it here on the golf course as well.

“So, I mean, first of all, what a day to play the final group in the Olympics with Hideki and then Xander gold medallist in Japan. Brilliant.

“For me that was one of the coolest rounds to be a part of. Sure, I wish I could have got my driver working a bit better and I struggled, but I battled and I'm so very proud of how hard I worked and tried to squeeze as much out of my game as I possibly could.

“Would love to have brought a medal home, not just for myself but for Team GB, would have been the ultimate. But the whole week has been phenomenal. I've made friends, can't say enough good things about my experience this week.” 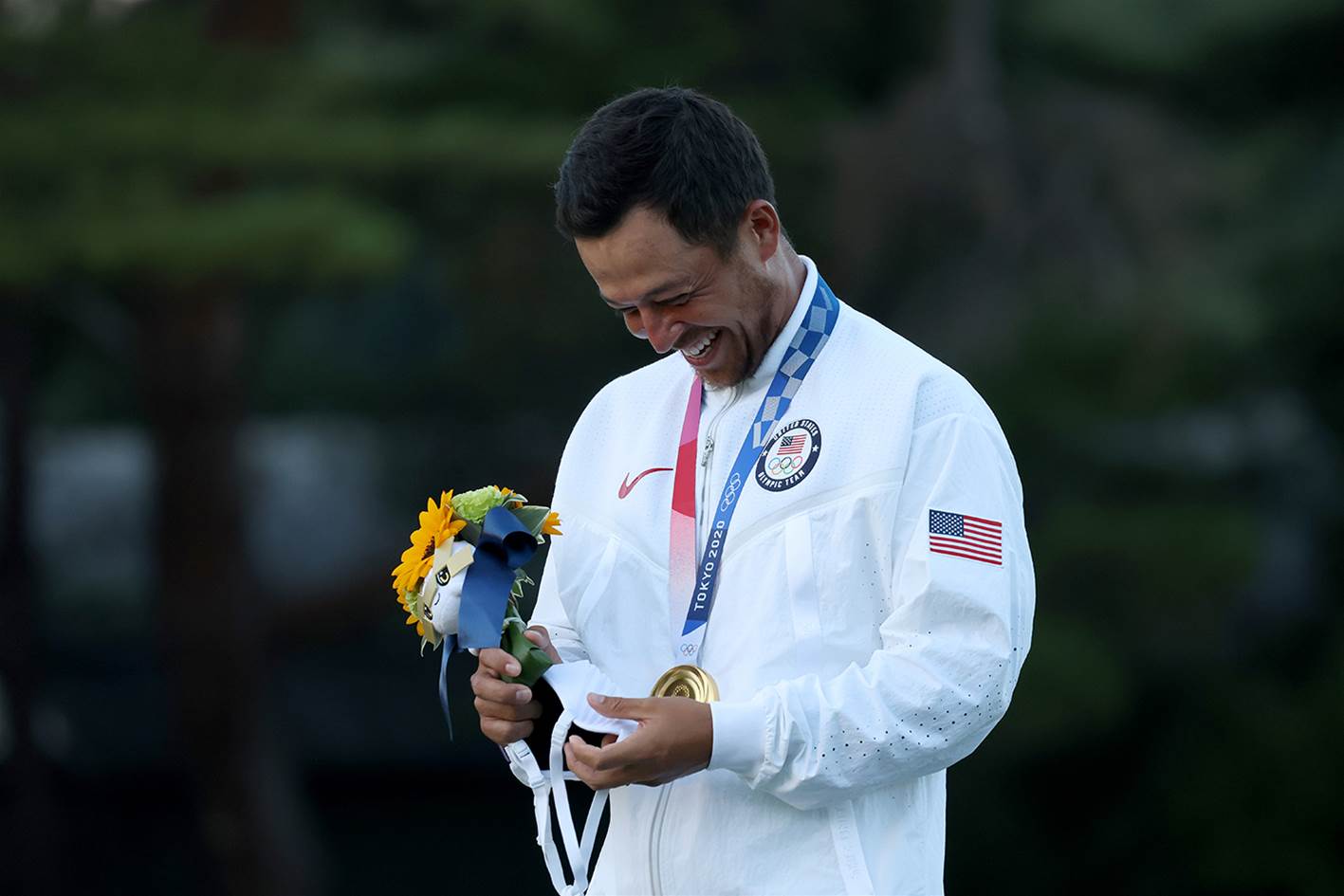 Schauffele takes a moment to laugh during the presentation ceremony. PHOTO: Getty Images.

It was a common thread throughout the week, which ended with a most memorable day, particularly for the medal winners.

“I feel good,” Schauffele said of winning the gold medal in Japan, considering his heritage. “I maybe put more pressure on myself to go win this more than anything else for quite some time … And my ties here with my grandparents living here and my mom growing up here as well, there's just all these things that sort of motivated me to do better, be better. And maybe I put more pressure on myself but it was sort of more than just golf for me and I'm just really, really happy and fortunate to be sitting here.”

Australia's bid for an Olympic medal in men's golf will have to wait until Paris in 2024, after Queensland's Cameron Smith fell one shot shy of the bronze medal play-off. Despite consecutive weekend rounds of 66, Smith was unable to convert a par-saver on the final hole to remain at 15 under and grab a spot in extra time. He finished T10.

Marc Leishman birdied his final two holes to a card his best round of the tournament, a two under 69, to climb into a share of 51st place.

The women's Olympic competition is due to start at Kasumigaseki Country Club on Thursday.