Saudi Arabia will host its first-ever golf tournament for women from March 19-22 next year at the Royal Greens Golf & Country Club in Jeddah, with 108 professionals set to participate.

The Ladies European Tour event will be staged in collaboration with Golf Saudi and the Saudi Golf Federation and will offer a prize fund of US$1 million (AU$1.5 million).

"I'm incredibly excited by this announcement and it is an honour for the Tour to be part of history in bringing the first-ever professional women's golf event to Saudi Arabia," LET CEO Alexandra Armas said in a statement.

"Confirmation of adding Saudi Arabia to our schedule for 2020 is an exciting prospect... and having seen the quality of the event staging for the Saudi International, I am sure this will be a fantastic experience for our players."

A number of golfers have been roped in as ambassadors to promote the sport in the country, including Britain's Carly Booth, Amy Boulden and Rachel Drummond, and Sweden's Camilla Lennarth and Isabella Deilert.

"I'm incredibly excited by this announcement and it is an honour for the Tour to be part of history in bringing the first-ever professional women's golf event to Saudi Arabia.” – LET CEO Alexandra Armas

Women's rights are a contentious issue in Saudi Arabia, one of the world's most gender-segregated nations.

The country has some of the world's strictest social rules but has been gradually chipping away at a guardianship system which requires all women to have a male relative's approval for important decisions.

This week Saudi Arabia announced it was ending entrances to restaurants segregated by sex.

The inaugural Saudi International men's event was held earlier this year with four of the world's five top-ranked golfers taking part after they were lured by lavish appearance fees for the European Tour's first event in the country.

However, players including former World No.1s Rory McIlroy and Tiger Woods have turned down offers to compete at next year's tournament, with the Northern Irishman citing Saudi Arabia's human rights issues. 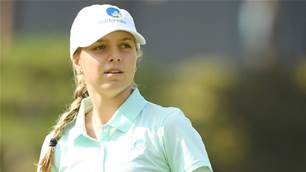