All the themes to find the Isuzu Queensland Open winner this week have been enacted since a tournament of rich history was rebooted in 2013.

The tournament has been a wonderful kick-start as the first victory in a professional tournament for Brett Coletta (2016) and defending champion Anthony Quayle (2020).

Coletta reinforced how good the pathways are to polish the skills of our best young players in Australia by winning as an amateur.

This week, think Louis Dobbelaar, Jed Morgan or the bang that Caloundra‘s own amateur Chris Crabtree could make around his home course.

Holding aloft the T.B. Hunter Cup was a drought-breaker for the seasoned David Bransdon (2015) at Brookwater.

This week, think Scott Strange, Steven Jeffress or even Bransdon again because he showed his liking for Pelican Waters with a course record 63 in last year’s opening round.

Or methodical Adam Blyth. The 2016 NSW Open champion had to get through Monday pre-qualifying to win his start for Thursday.

Winning a home state Open was something to celebrate for Gatton product Andrew Dodt (2014) just as Quayle felt that way because his golfing home is on the Gold Coast even though he is Northern Territory born.

This week, think Jake McLeod, before he heads back to the European Tour, Wools-Cobb, Brett Rankin and a host of other local hopes who are the most comfortable on Queensland’s grainy greens.

For Jordan Zunic (2018) and Michael Sim (2017) their Queensland Open successes revived just how good they both are after bigger victories early in their careers.

This week, think ageless 1983 Australian Open champion Peter Fowler. He’s 61 and will still show some younger partners how to play the game even if winning this week may be beyond him.

Nick Cullen flew that rare flag as a leftie to win an Australian tournament in 2013.

Smylie is just 18 and starting his pro journey after switching from the amateur ranks to play The Players Series Sydney last week.

“There were a lot of positives to take out of that week at Bonnie Doon … and I think mum and dad enjoyed me shouting lunch for a change on the Sunday." – Elvis Smylie

Smylie’s quality was there for all to see at Bonnie Doon where he finished in a tie for third at 15-under-par after rounds of 68-67-69-65.

As an amateur, he finished in a tie for 24th at the Queensland Open last year with a closing round of 68 to show his liking for Pelican Waters.

The nines at Pelican Waters have been flipped this week so the tough par-4 closing hole will play as the 9th.

“There were a lot of positives to take out of that week at Bonnie Doon … and I think mum and dad enjoyed me shouting lunch for a change on the Sunday,” Smylie said with a smile.

“I was also proud of the way I handled things with the bit of hype around me turning pro.”

His $7,350 cheque definitely won’t be his last from golf.

Smylie did not suddenly feel weighed down on course just because he was playing for money.

“Nothing was different. It felt exactly the same to me, I just didn’t have that (a) next to my name,” Smylie said.

“I knew I’d been ready to turn pro for a couple of months and that was just the next step.”

Smylie had six birdies on the final day and felt he did everything in his power to be in the finish.

“I did everything in my control but four eagles in the final round was absolutely ridiculous (from winner Andrew Martin) as great golf,” Smylie said.

Who will have a one-off giant week at Pelican Waters or will steady good form be the pointer?

How will Smylie go in the Queensland Open lottery to find a winner?

Here’s an insider tip. At the beginning of last week, he joined Dobbelaar, the rest of the Queensland Academy of Sport squad and European Tour pro Maverick Antcliff for a round at the course.

Smylie shot 63 to head them all. The kid can play and what a pulse he’d give the Queensland Open if he made a charge.

A teenager from Southport chasing his first pro win in his home state Open, a leftie … all great themes. 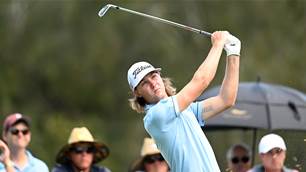