Lismore’s Rhein Gibson has started well in the RSM Classic in Georgia and is in a tie for second, one shot behind leader Webb Simpson.

Simpson started slowly but birdied six of his last nine holes on Thursday to finish with a seven-under-par 65.

It was the other way round for Gibson who birdied five of his first nine holes on his way to be six-under par for the day.

Gibson is locked in a three-way tie for second with American Cameron Tringale and South Korean Kyoung-hoon Lee. The 33-year-old Gibson is yet to finish in the top-10 of a PGA Tour event, having played predominantly on the second-tier Web.com Tour and other events around the world.

Nine players are a shot back from Gibson and share fifth. Sydneysider Matt Jones is the next-best placed Australia at two-under, and in a tie for 43rd.

Simpson, who lost the event in a playoff in 2011 before winning the US Open the following year, said the key to overcoming his slow start was focusing on his own game.

"Playing with guys who are making birdies, it's hard to stay patient. But I was able to do that," he said.

Simpson, 34, is coming off his longest break from the game since he turned pro. The last event he competed in was in Las Vegas in early October.

The World No.12 will look to sharpen his game ahead of two tournaments in December: the Hero World Challenge in the Bahamas and the Presidents Cup at Royal Melbourne in Australia. 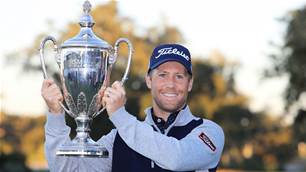