Matt Millar is the antithesis of modern golf’s trends.

He’ll tell you himself that he can’t hit it out of sight on a dark night and his long approaches don’t have the ice on them that his younger rivals seem to require.

But to quote an onlooker at Murray Downs today: “*#%@ he gets it in the hole.”

It would be a brilliant lesson for all young golf fans to watch the 45-year-old Canberran ply his tournament trade, as he did so marvellously today to open the Murray Open with an eight-under-par 64.

But they’re invariably drawn to those who bruise Titleists and flick lob-wedges.golf

The 2021 Australian Amateur runner-up Jeffrey Guan, 17, himself a burgeoning bomber, had the inside-the-ropes experience with Millar today and left in awe.

“I turned 45 in early September and I’ve started to switch my focus towards playing really well in these few years leading up to the (U.S.) Champions Tour, if I can." - Matt Millar.

“It was unbelievable, he hit every fairway and every green … it was like he had a perfect plan,” Guan gushed as his opening 70 was dwarfed by Millar’s blue-collar excellence.

Millar, the 2018 PGA Tour of Australasia player of the year, has made a stellar career out of minimising mistakes and cashing in when his game heats up.

And for about 90 minutes today, it was red hot.

A birdie from the greenside sand on the long 7th was followed by laser wedges to the eighth, ninth, 10th and 11th greens, three of which were converted into birdies.

He then played a stunning 4-hybrid to within 2m on the long 12th and calmly rolled in an eagle putt.

He then lipped out on 13 before one last birdie on 14 gave him his two-shot buffer over Melburnian Ryan Lynch in second place.

For many in the field playing their first competitive week back after Covid breaks of varying lengths and severity, just being at the opening event of the Golf Challenge NSW Open regional qualifying series is victory enough.

But not for Millar.

He was prominent at the Barham pro-am at the weekend en route, then won the one-day Cohuna pro-am with a 64 on Monday.

And as the clock ticks towards an important goal in his golfing life, Millar is hell bent on making the most of every opportunity, particularly after the setbacks of the pandemic.

“I don’t think Covid has taken away time from me, but I’m not getting any younger,” he said.

“I turned 45 in early September and I’ve started to switch my focus towards playing really well in these few years leading up to the (U.S.) Champions Tour, if I can.

“Between now and then, I want to play well here as well, but I don’t want to let the age side of things slow me up.”

Millar has kept his game sharp by coaching at his home club, Federal, in southern Canberra, playing once a week when those duties permitted.

“But coming out of Covid has been all right. I probably adapted pretty quicky and learnt lessons from the first time we came out of it (in 2020),” he said.

“I can’t be stand-off-ish and slack. Because it’s all in there, you’ve just got to bring it out – hit the ground running, rather than easing back into it and seeing what happens.

“I’d rather build a strong approach from my side and go from there.

“Last year I wasn’t playing bad golf or anything, but it took a couple of rounds to get there and I wasn’t as sharp upstairs, so that’s what my focus is this time. Almost, `Let’s go’.

“When I have played, I’ve been hitting a lot of good drives and my putting may not have been perfect every day, but it’s not far away.

“The scores have been good, I shot a few nice ones at Federal, so I feel like I’m right there. I feel like I just need to tidy things up a little bit and then it should be there.

“It’s just my awareness and attention to the little things.”

Heaven help the rest of the field tomorrow if those little things start to click. 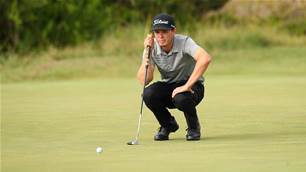 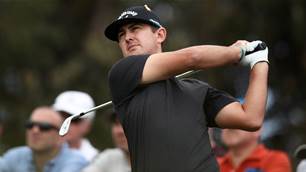