If it wasn't for nine-year-old Harvey Leishman, Australia's tilt at the 2021 Masters might have been on life-support after a brutal opening round at August National.

Marc Leishman's opening even-par 72 was the best of the Australians, as hard and fast conditions caused havoc for seemingly everyone except England's Justin Rose.

Rose fashioned a brilliant seven-under 65, on a day when the scoring average was 74.5, to take a four-shot lead. Just 12 players were under par with Japan's Hideki Matsuyama and American Brian Harman the next best with 69s.

Leishman didn't finish under par, but he was deep in the red early in his round thanks to some special support.

Golf mad Harvey, who has a swing near identical to his five-time PGA Tour-winning dad, was one of the limited spectators allowed during a pandemic-affected tournament.

It was the first time he'd seen his father play Augusta National in competition.

Leishman senior did not want to disappoint, and it appeared he might replicate his 2013 Masters heroics and lead the first round after four incredible birdies in his opening six holes. The highlight moment came when he chipped in from behind the par-3 4th hole, turned and pointed animatedly at his son, who in turn created his own Augusta roar.

"It was great to have him there. He was right behind me, so I gave him a thumbs up when we were walking up to the green and when I made it I knew he'd be pretty pumped," the usually understated Leishman said.

"It was great to have him there. He was right behind me, so I gave him a thumbs up when we were walking up to the green and when I made it I knew he'd be pretty pumped." – Marc Leishman

But a brutal back nine, after Harvey had run out of gas and had to leave, saw Australian hopes for a second Masters title dwindle. Leishman battled hard but four bogeys in a six-hole stretch and some missed birdie putts on the par-5s meant he's got some work to do Friday to reel Rose back in.

While on paper it doesn't look pretty, Leishman was proud of his resilience, particularly given memories of 2014 could have easily derailed his game.

Back then Leishman came out firing in the second round with three quick birdies that took him to the tournament lead, but imploded to drop 10 shots in the next 12 holes and miss the cut.

He was adamant it wouldn't be quite as bad this time around.

"I did lose my head a bit that year, and I think I only still missed the cut by a shot or two, so I know that if you just keep your head on for every shot here, there's holes you can birdie and eagle," he said.

"It wasn't the finish I was after, but I didn't throw it away, either. To shoot even par on a day like today, I was pretty happy."

His total was two better than 2013 champion Adam Scott and 2020 runner-up Cameron Smith, who weren't prepared to wave the white flag despite final hole bogeys leading to matching 74s. They'll need to create history if they are to win given the largest deficit after one round for a Masters champion is seven, shared by Nick Faldo (1990) and Tiger Woods (2005).

"You can make up a lot of ground with a good score," Scott said. "I need one in the next two days. It's as simple as that."

Matt Jones was also tied 30th at two-over in his first Masters since 2014 but former World No.1 Jason Day had a rough 77 to be near the back of the 88-man field. 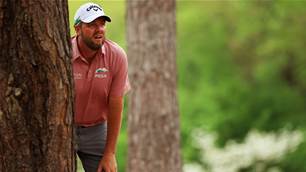