In the end, the PGA of America could have played the 101st USPGA Championship at Bethpage Black on paper rather than grass.

Going into this week on Long Island, the smart money was on a long-hitting duel between Brooks Koepka and Dustin Johnson. And so it proved, albeit in a fashion only the most fanciful imagination could have come up with.

Seven shots clear at the start of the final day, Koepka’s edge over his close pal went all the way down to one when Johnson’s birdie on the 15th preceded the defending champion’s bogey on the previous hole – his fourth in a row – by less than a minute. Then, just when things were getting really interesting, the pair went off in different directions again. Johnson made bogeys on the 16th and 17th, each time failing to rescue wayward approach shots. And the previously ferocious but suddenly fragile Koepka, just when he absolutely had to do so, hit the elusive fairways at the 15th and 16th en route to vital pars.

All over? Not quite. Moments after Johnson made an unlikely par from miles left of the final hole, Koepka three-putted the penultimate green. The ever-changing gap between the pair was two shots with one to play. And it was enough. After driving left into sand, Koepka splashed out before hitting a sublime pitch to no more than four feet from the flag. 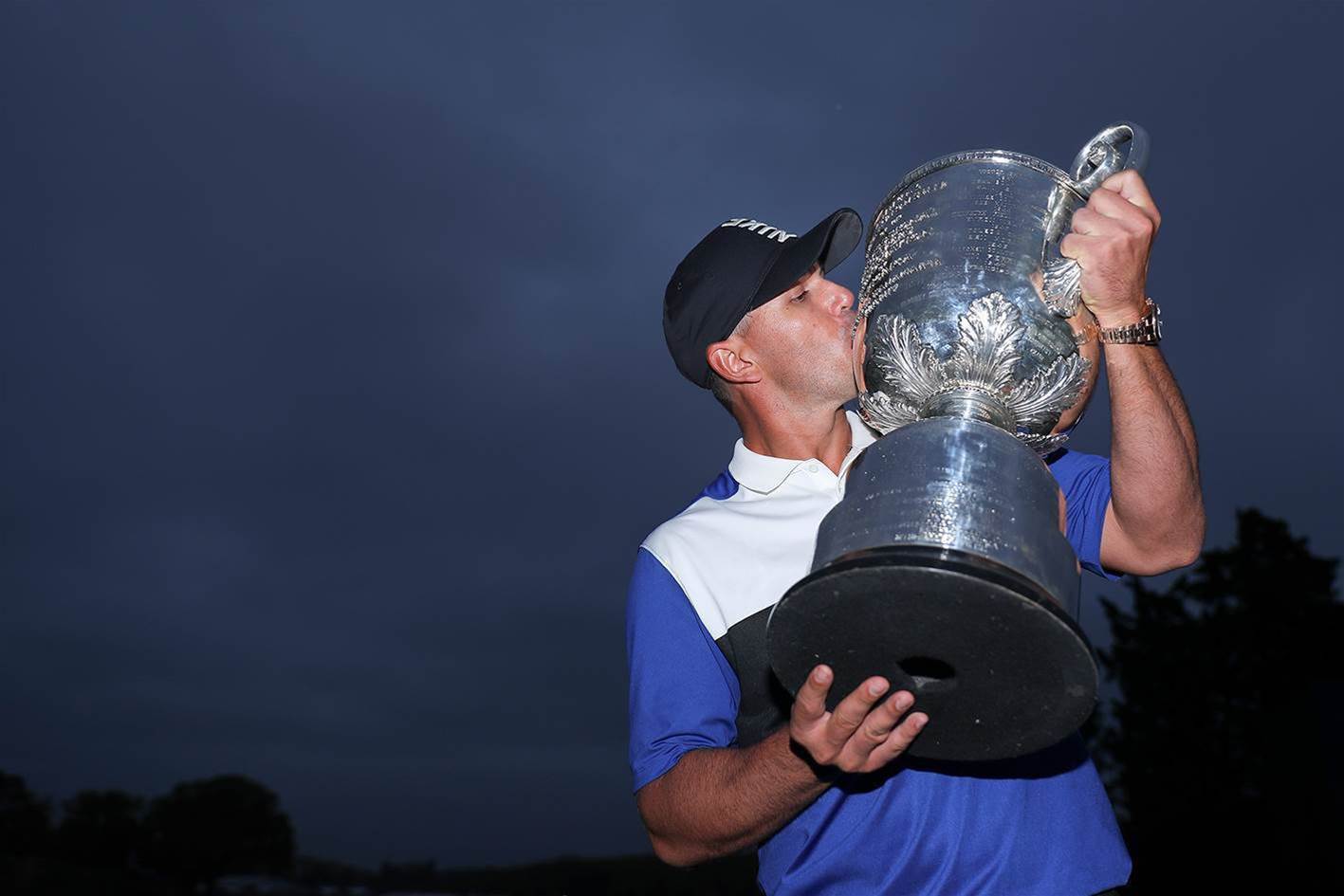 One putt later, we had a decision. Koepka’s stumbling 74 and 272 aggregate, eight-under par, was good enough to beat Johnson’s 69 for 274. No matter. The record book will show that, for the fourth time in less than two years, Koepka is a winner at the highest level of the game – and the first man ever to win back-to-back USPGA and US Open titles. He is also officially now the No.1 ranked player on the planet.

Not surprisingly, the champion’s mind was a little scrambled in the immediate aftermath of victory. A sample of his thoughts:

“I’m just glad we didn’t have to play any more hole. That was a stressful round. DJ played awesome. I hear all the DJ chants. He did an unbelievable job putting pressure on me,” Koepka said. “It’s incredible to be here. I’m still in shock, this is awesome. I definitely felt DJ coming. Not sure where my emotions are at. This is the most satisfying of the four. I had to grind it out like never before. The conditions were brutal. I didn’t play that badly but I didn’t hit the ball in the fairway enough. And if you do that it’s going to be a struggle.

“I believe in myself. I’m super-confident. I didn’t have my best but I was able to re-focus and get the job done.”

And, more coherently, some other details: 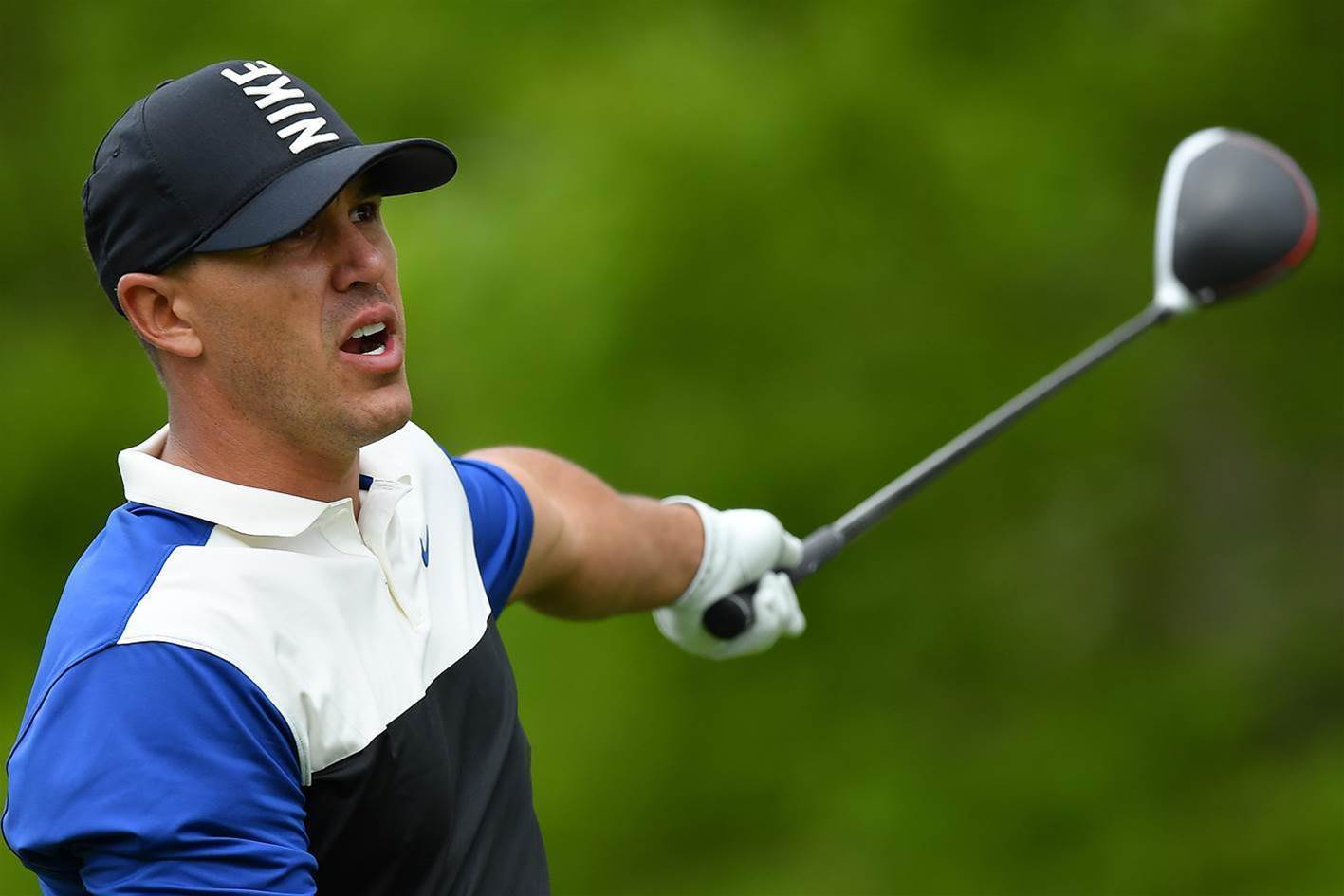 A wayward drive at the 13th had Koepka taking a seat on the bogey train. PHOTO: Getty Images.

For the runner-up, however, this was the latest in a series of disappointments in the four events that matter most. Yes, Johnson won the 2016 US Open, but for him the mounting failures far outweigh the first-places.

Is Johnson’s slightly funky technique the root of his problems under the severest pressure? The case for the prosecution is mounting. And it will come as no consolation to discover that he is now the eighth man – after Phil Mickelson, Jack Nicklaus, Greg Norman, Louis Oosthuizen, Arnold Palmer, Tom Watson and Craig Wood – to finish second in all four Grand Slam events.

“I knew if I could get off to a good start, which I did, I could maybe put a little bit of pressure on him,” Johnson said, after completing his fourth successive sub-70 round of the week. “I did that, too. The last three holes is what got me. Walking off 15 green and standing on 16 fairway, I'm at 8-under. I hit two really good shots there on 16. I still don't know how my ball went over the green there. That’s obviously not a spot where you can go. But I'm very pleased with the way I played.” 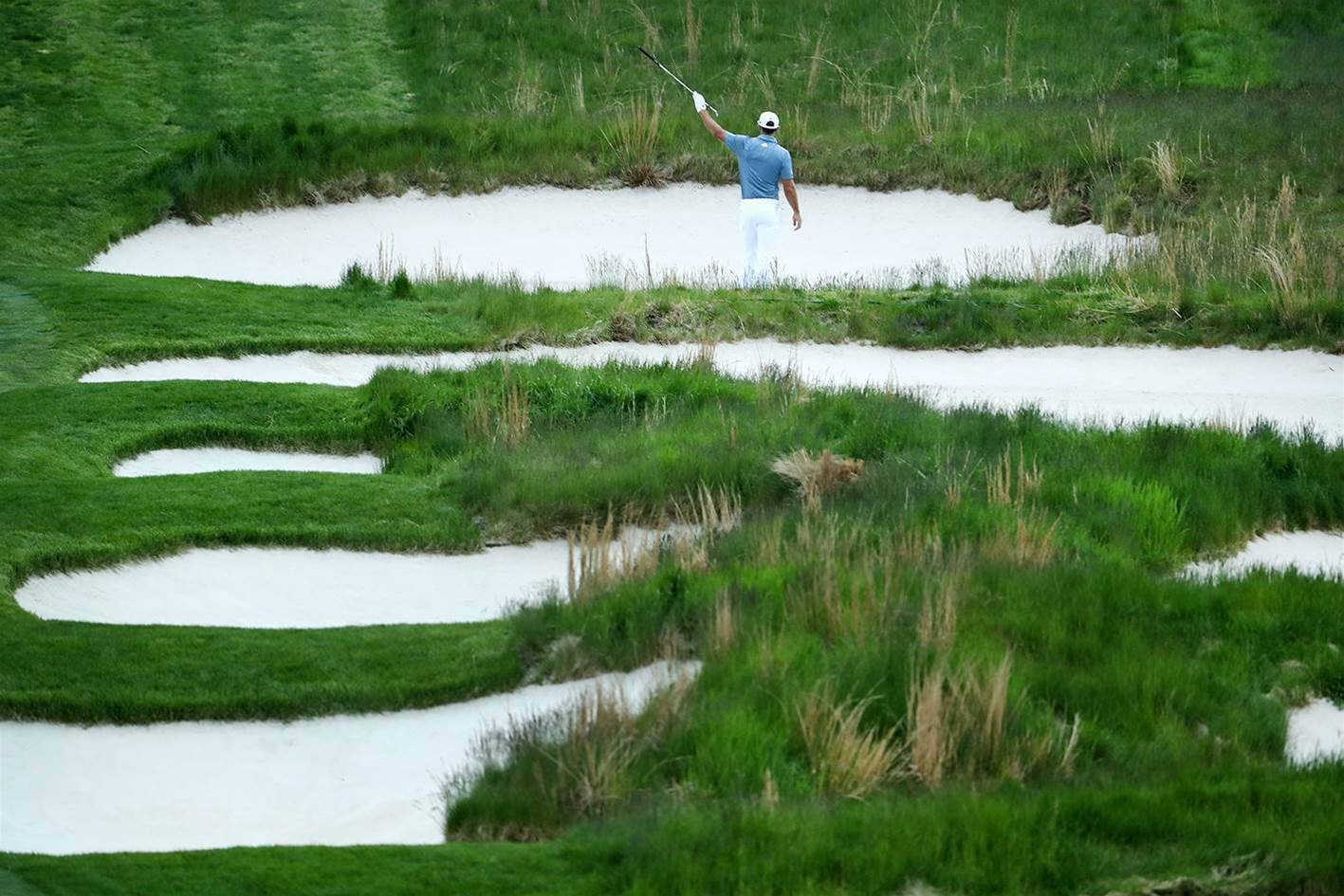 Dustin Johnson signals to the gallery left of the 18th green after hooking his approach. PHOTO: Getty Images.

Johnson also had words of praise for a crowd that made it clear they were mostly on his side, to the point where many were cheering “DJ, DJ” as Koepka attempted to putt. Should the 2024 Ryder Cup come to Bethpage Black as scheduled? On this tawdry evidence, surely not.

As for the four-strong and sadly, largely irrelevant Australian contingent, Adam Scott’s 74 comfortably maintained his position as low-Aussie. The former Masters champion’s one-over par aggregate of 281 was good enough for a T-8 finish. Jason Day’s 72 left him T-23, well ahead of Cam Smith and Lucas Herbert. Smith shot 74 and was T-64; Herbert’s 75 saw him pull up in a tie for 71st place. Understandably, both were more than happy to be finished at the end of such a tough four days.

“I’ve been struggling with my ball-striking for the last couple of months so this wasn’t the place for me,” admitted Smith. “But I’ve got some positives to take from the week which is nice. The hardest thing was hitting a half-decent drive that would be okay most weeks, but not here. There was a lot of chipping-out. And you can’t run the ball onto the greens, there is so much rough in front. I’m just glad it’s over to be honest.” 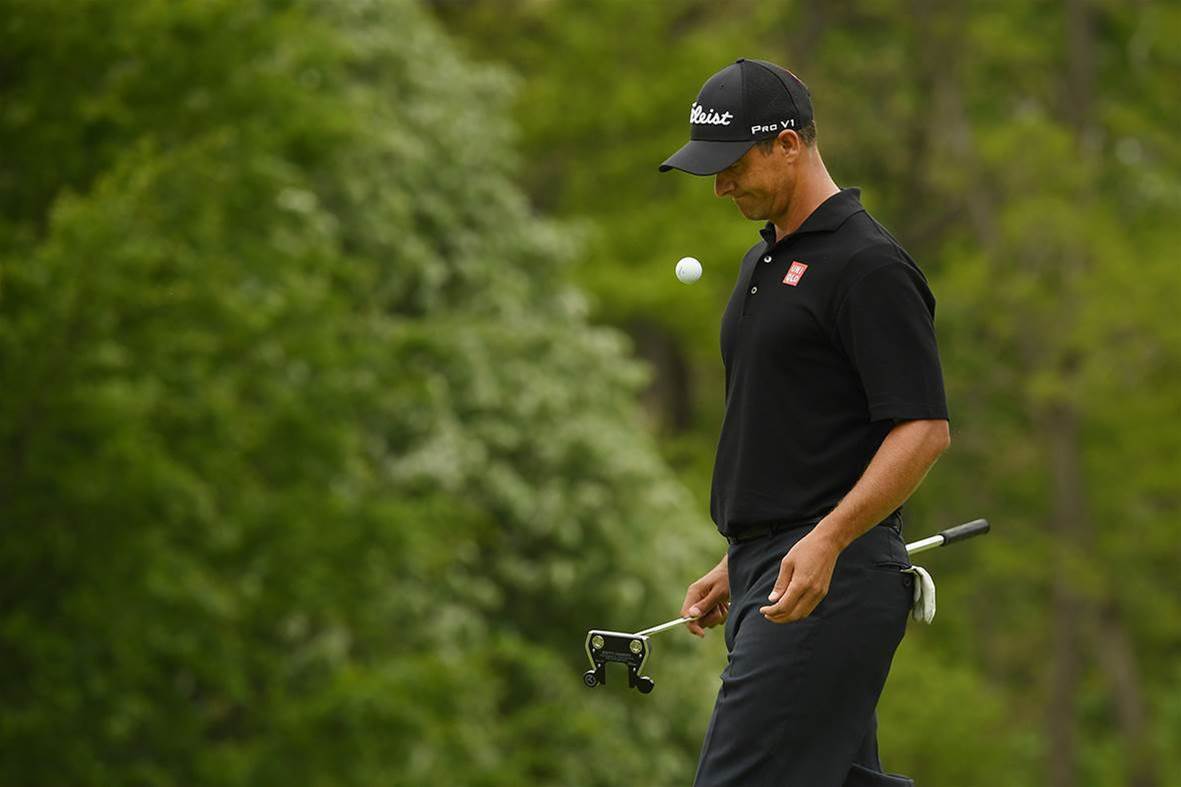 Adam Scott claimed another top-10 in a major despite a lacklustre weekend at Bethpage. PHOTO: Getty Images.

Herbert, as usual, had more to say about the 292 shots he expended over the 72-holes.

“My score tells you how hard it was,” he said. “This course puts you under so much pressure from the first tee-shot to the last putt. Three days of that was brutal enough. I just wasn’t prepared for more today. It was such a struggle, physically and mentally.

“Every part of your game is tested to the limit. The fairways are 25-yards wide and that is hard to hit 14 times in a round. And you have to hit driver a lot. You have to get lucky to get a lie in the rough. Most times, you just wedge it out. And running the ball in is not an option.

“Then the greens are running at 12 on the Stimpmeter. Missing on the short side gives you no chance. Then it’s like putting on billiard tables. Speed control is tough. Putts that finish dead on greens running at ten were trickling off to four feet here. That’s a lot of stress.”

Indeed. For everyone. Even Brooks Koepka. 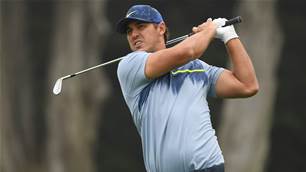