Homeward-bound Masahiro Kawamura of Japan hopes to return with all guns blazing after suffering the agony of another bridesmaid finish at the Hero Indian Open on Sunday.

The Japanese is looking forward to a well-deserved break following his exertions at the DLF Golf and Country Club, where he tried to surmount another late fightback only to be denied another victory by one shot again.

“I haven’t been home for the last three months and I need to take a holiday now. I’ve been on the road since my first event in Singapore in January and I guess it’s time for me to recharge and come back stronger again,” Kawamura said.

Kawamura’s second-place finish in India was his fourth runner-up result in the last 12 months and he is seeking better fortunes when he tees up for his next event on the Asian Tour.

“Coming into the last two holes and seeing my name on the leaderboard, I was really nervous. I knew how important the final hole was and I hit a good shot but was just unlucky,” Kawamura said. Kawamura may be left to wait longer for his second Asian Tour win but his finish in India has moved him three spots up to third place on the Habitat for Humanity standings.

Queenslander Scott Hend continues to lead the money list after his 10th Asian Tour victory at the Maybank Championship a fortnight ago, while Thailand’s Jazz Janewattananond remains in second place after his season haul of US$427,600.

“I’ve been having a good stretch since I won the Jeev Milkha Singh Invitational (PGTI event), I think that was where it all started for me and it’s been going great. I am feeling good about my game and all parts of my game are going good,” Chikkarangappa said.

The Asian Tour heads to Dhaka, Bangladesh for the Bangabandhu Cup Golf Open 2019 this week.

Held at the highly-acclaimed Kurmitola Golf Club, the full-field Asian Tour event, which has grown from strength to strength since its inception in 2015, will also welcome the return of all its past champions when it celebrates its fifth consecutive edition from April 3 to 6 (Wednesday to Saturday). 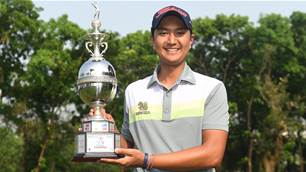