Thai sisters Ariya and Moriya Jutanugarn have shot an 11-under 59 in best-ball play to take a two-stroke lead in the LPGA Tour's Dow Great Lakes Bay Invitational.

The Jutanugarns had a 14-under 126 total at rainy Midland Country Club on Thursday after opening with a 67 in alternate-shot play the previous day. They will play alternate shot Friday and close with best ball on Saturday.

"I think just playing together with my sister makes it more comfortable because we can support each other," Moriya said.

"Like when I had trouble or like hit a bad shot she'd cover it, or when she doesn't hit a good shot, I'm just trying to cover it.

"It seems like that's how you should play the best-ball format."

Two-time major champion Ariya got things going, making birdies on the first two holes and four of the first five. Moriya added birdies on Nos. 6, 7 and 12, Ariya birdied No. 14, they both birdied Nos. 15 and 17, and Moriya birdied 18.

"She's really solid, really consistent," Ariya said. "Every time she hits the ball I feel like I have no worry, so I know where the ball is going to go. Even if she misses, it's going to be fine.

"When you have partners, you have really solid golf, you kind of just go for it, go for the pin and hit it hard, so you have no fear."

"She's really solid, really consistent. Every time she hits the ball I feel like I have no worry, so I know where the ball is going to go. Even if she misses, it's going to be fine." – Ariya Jutanugarn

"It got really soft, so whatever irons or wedges I had, I was just trying to go straight at the pin pretty much," Ashok said. "I think that helped make a few birdies toward the end after the rain."

Defending champions Cydney Clanton and Jasmine Suwannapura had their second straight 65 to join Carlota Ciganda and Mel Reid (64) at 10 under.

Suwannapura and Clanton won the inaugural event by six shots in 2019. The tournament was cancelled last year because of the COVID-19 pandemic.

Danielle Kang and Lydia Ko topped the group at nine under after a 63.

Nelly and Jessica Korda, who tied for the first-round lead after a 65, were eight strokes back at six under after a 69.

Australia's Minjee Lee and her Filipino partner, Yuka Saso, are tied 23rd at six under for the tournament.

The Katherine Kirk-Amy Olson and Sarah Kemp-Alena Sharp combinations are both at four under, in a tie for 31st.

The Evian Championship, the fourth major of the year, is next week in France. 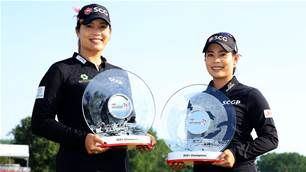 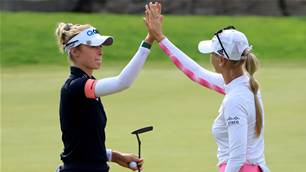 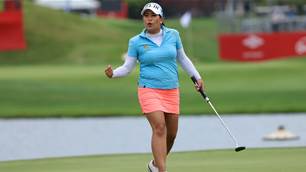