Jason Day has improved his Presidents Cup hopes, shooting six-under-par 66 to sit two strokes off the lead after the opening round of the CJ Cup in South Korea.

In the first event of a three-tournament PGA Tour swing through Asia, Byeong-Hun An was the first-round leader on Thursday with a 64 at the Nine Bridges course.

Joaquin Niemann of Chile is a shot behind with Day alone in third place after sinking six birdies.

Fellow Australian Cameron Smith is well placed, just one stroke adrift, in a five-way tie for fourth after a first-round 67.

Day is hoping International team skipper Ernie Els will choose him as a captain's pick against the Tiger Woods-mentored US side in December at Royal Melbourne.

"I think overall it's a great start ... to be able to capitalise on a day like we had today because we're not used to the wind being down like it was. I'm excited to see how the rest of the week goes," Day said.

Before his first round, Day had said it was disappointing not to make the team on his own merits. "But it is a reminder that nothing is given to you in this game.

RIGHT: Local favourite An leads by two shots after the opening round in Korea. PHOTO: Kevin C. Cox/Getty Images.

"I certainly want to be on the team and believe I can be an asset to the Internationals. Being in my home country certainly gives me an edge and I've had some success on the sandbelt (courses) and Royal Melbourne in the past."

Defending champion Brooks Koepka shot a 69 on Thursday with an eagle on the 18th. Last year's runner-up Gary Woodland had a 71.

Local favourite An also had occasional trouble with the swirling wind and was happy not to drop a shot.

"Eight under, bogey free is always good ... everything was going at the flag the perfect distance and obviously I holed a lot of putts today, so everything just clicked and I shot bogey free."

Kevin Na, who won in a playoff two weeks ago in Las Vegas, had a 72 and Sergio Garcia 73.

There are 78 players in the no-cut, limited-field event. 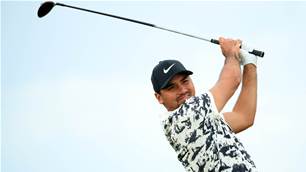