Bracing for a brutal test of her nerve and skill, Hannah Green is tipping pars will be king as she eyes a second major golf championship at the US Women's Open in San Francisco.

Green, the in-form World No.14, and the 12th-ranked Minjee Lee will spearhead a five-strong Australian charge at The Olympic Club, where any shot even slightly off target will likely be punished.

"This week is going to be a little different to what we've had the whole entire year," Green told AAP of the daunting challenge that lies ahead.

"I think this year pars are going to be great scores.

"I wouldn't be surprised if you saw the winner at over par. That's how tough it's playing.

"The course is long, just because we are getting cooler temperatures, and the rough is really thick.

"So getting yourself around is going to be quite the tough task."

Major championships are notoriously long weeks at the best of times but Green says "having to concentrate with every shot on this golf course, it's going to be quite gruelling".

But the 2019 US PGA Championship winner feels ready after a series of near misses this season, including top-seven finishes in her past two events and a tie for 14th at the season's first major, the ANA Inspiration.

"I think this year pars are going to be great scores. I wouldn't be surprised if you saw the winner at over par. That's how tough it's playing." – Hannah Green

"I've got a great pairing, playing with Danielle Kang and Jin Young Ko (for the first two rounds) so that will be really fun to play with them.

"They're both in quite some form this year. It's always nice to have good playing partners to kind of carry on and vibe off each other.

"Obviously I want to be in contention and be right up there and hopefully get my name on that trophy."

"They don't actually have a first cut of rough here, so it's going to be quite interesting..." the 24-year-old said.

"The rough is quite thick around the greens, so whoever hits the most greens, I want to say, is probably who's going to win the tournament.

"So fairways and greens is key, but also giving yourself uphill putts.

"If you get some downhill putts, it's going to be defensive. You won't be able to be aggressive and try to make it.

"All up, every part of your game is going to be tested this week, so I'm ready for the task."

The tournament starts at midnight on Thursday (AEST) with Green and Lee joined in the field by fellow Australians Sarah Kemp, Sarah Jane Smith and Emily Mahar. 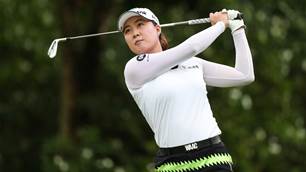