England's Georgia Hall set a course record of seven-under-par to take a one-shot lead after the first round of the Saudi Ladies International.

Hall, who won the 2018 Women's Open at Royal Lytham & St Annes, recorded three consecutive birdies after starting from the 10th in her 65.

Wales' Lydia Hall is one stroke behind after signing for a 66, having also started on the 10th at the Royal Greens Golf & Country Club, while the Australian pair of Whitney Hillier and Stephanie Kyriacou made solid starts with rounds of 71 that leave them in equal 11th place.

"I was pleased with today and took advantage of the morning tee time. It was pretty windy on the back nine, but I'm happy with my score," said Hall, who won her maiden LPGA Tour title at Cambia Portland Classic in Oregon during September.

"I have been hitting it really well and holed some good putts, the pins were not too tricky, but happy to be done for the day." – Georgia Hall

"I have been hitting it really well and holed some good putts, the pins were not too tricky, but happy to be done for the day."

"I was a little greedy on the 9th and 13th, hitting my second shot in the water, but I got away with bogey," said Dane Pedersen.

"Tomorrow I might play a bit safer and play away from some of the tough pins."

Veteran four-time major winner Laura Davies is in a group tied for eighth at two under following her round of 70. 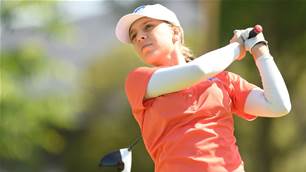