Australian golf icon Karrie Webb has predicted Hannah Green's victory at the Women's PGA Championship will open the floodgates to what promises to be a stellar career.

In a passing of the baton moment, World Golf Hall of Fame member Webb stood proudly on the 18th green at Hazeltine Golf Club in Minnesota.

Webb congratulated the 22-year-old she has mentored for four years as Green clinched her maiden major victory and LPGA Tour title.

"I start choking up thinking about how much winning this event would change her life and how proud I was of her," an emotional Webb said.

Green, from Perth, is the first Australian woman to win a major since Webb claimed the 2006 Kraft Nabisco Championship.

By saving a clutch par from a greenside bunker on the final hole, Green – who led after every round – won by one shot from defending champion Sung Hyun Park (68), whose closing birdie added extra pressure.

"That was world class; the way she closed out that tournament," Webb said of Green, whose even-par 72 gave her a nine-under total.

Green, in only her second full year on the LPGA Tour, is the first wire-to-wire winner of the Women's PGA since 2011. "She was made for winning LPGA tournaments and major championships," Webb said.

"Years ago, I could tell that because of the way she carries herself on the course and how she is mentally."

Green's rise has been meteoric in the past two years.

She won three times on the secondary Symetra Tour in 2017, which gave her the Rookie of the Year award and an LPGA Tour card for 2018.

On Sunday, she became just the third Australian woman after Jan Stephenson and Webb to win a major.

Green paid tribute to the mentoring of Webb, whose scholarship she won in 2015 came with a trip to watch Webb at that year's US Women's Open.

"Getting to know Karrie, staying in a house with her and watching everything she (did) in a major tournament gave me a big insight into what it was like," Green said.

Green built a handy lead in the final round before all but frittering it away with three bogies in a four-hole stretch around the turn.

She steadied the ship after that and a 15-foot birdie at the 16th hole proved decisive.

Thailand's Ariya Jutanugarn, who started the day one shot behind Green, had a nightmare 77 to plunge into a tie for 10th on three-under.

Minjee Lee shot a final round one-under 71 to tie for 30th while Victorian Su Oh finished six over for tied 53rd. 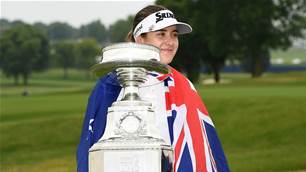