In the end, it was a magical 176 metre 5-iron that decided the Women’s NSW Open at Dubbo Golf Club.

That was the club Julia Engstrom hit on the par-3 18th hole, and it did everything but go in to close out her maiden Ladies European Tour victory.

The 18-year-old Swede stood on the tee of 72nd hole all tied at 13-under with overnight leader Manon De Roey after a rollercoaster final round.

The Belgian had a five-shot cushion to start the day but felt the pressure late with dropped shots at both the 16th and 17th to relinquish the outright lead for the first time since Friday afternoon.

“I’ve been close (to winning) a few times now, and I’ve been waiting for it, but you never know if it’s going to happen or not.” - Julia Engstrom

Engstrom hit first at the final hole and had the large crowd in raptures as her ball landed 20 feet short of the hole then curled around the sloping green to roll within inches of the cup.

It was a tough act for De Roey to follow and she promptly pulled her tee shot wide of the green then flubbed the chip to hand the title to Engstrom.

“I don’t think I understand it yet,” Engstrom said immediately after signing her card.

“It’s been a great week, and I’m just thrilled.”

She said the shot that won the tournament at the 18th was revenge for three previous bogeys.

“I’ve bogeyed 18 all three rounds till now, and I was like ‘this time I’m not going to bogey it. And I hit a great shot.

“I didn’t even know how close it was until I saw the reaction of the crowds and it was a great finish to a great week.”

Engstrom said she knew things were getting tight at the end of the round but did her best to play just one shot at a time.

“I was trying not to focus on what she did,” she said of playing partner De Roey, “and I didn’t know what the others were doing either so I was just trying to play as good as I could.

“I’ve been close (to winning) a few times now, and I’ve been waiting for it, but you never know if it’s going to happen or not.”

Engstrom finished the week at 14-under, De Roey outright second at 12-under. Swede Camilla Lennarth was alone in third at 11-under with India’s Aditi Ashok and Thai teen Atthaya Thitikul sharing fourth at 10-under.

Soo Jin Lee was the leading Australian at 4-under and tied for ninth, while Grace Kim took low amateur honours, finishing in a tie for 21st at 2-over. 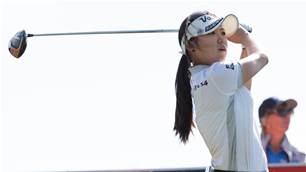