World No.13 Tavatanakit led by two after the second round of the debut Aramco Team Series – Bangkok presented by Public Investment Fund, firmly cementing her as favourite to claim the crown in the three-day event’s $500,000 individual competition.

But as the 2021 ANA Inspiration champion struggled to a final day one-over-par 73, playing partner De Roey flourished, finding six birdies as she romped to a three-shot victory and her maiden Tour title.

“It feels great,” said De Roey – the first Belgian to win an LET title in 25 years. “I was waiting for this for a long time so I’m very happy. 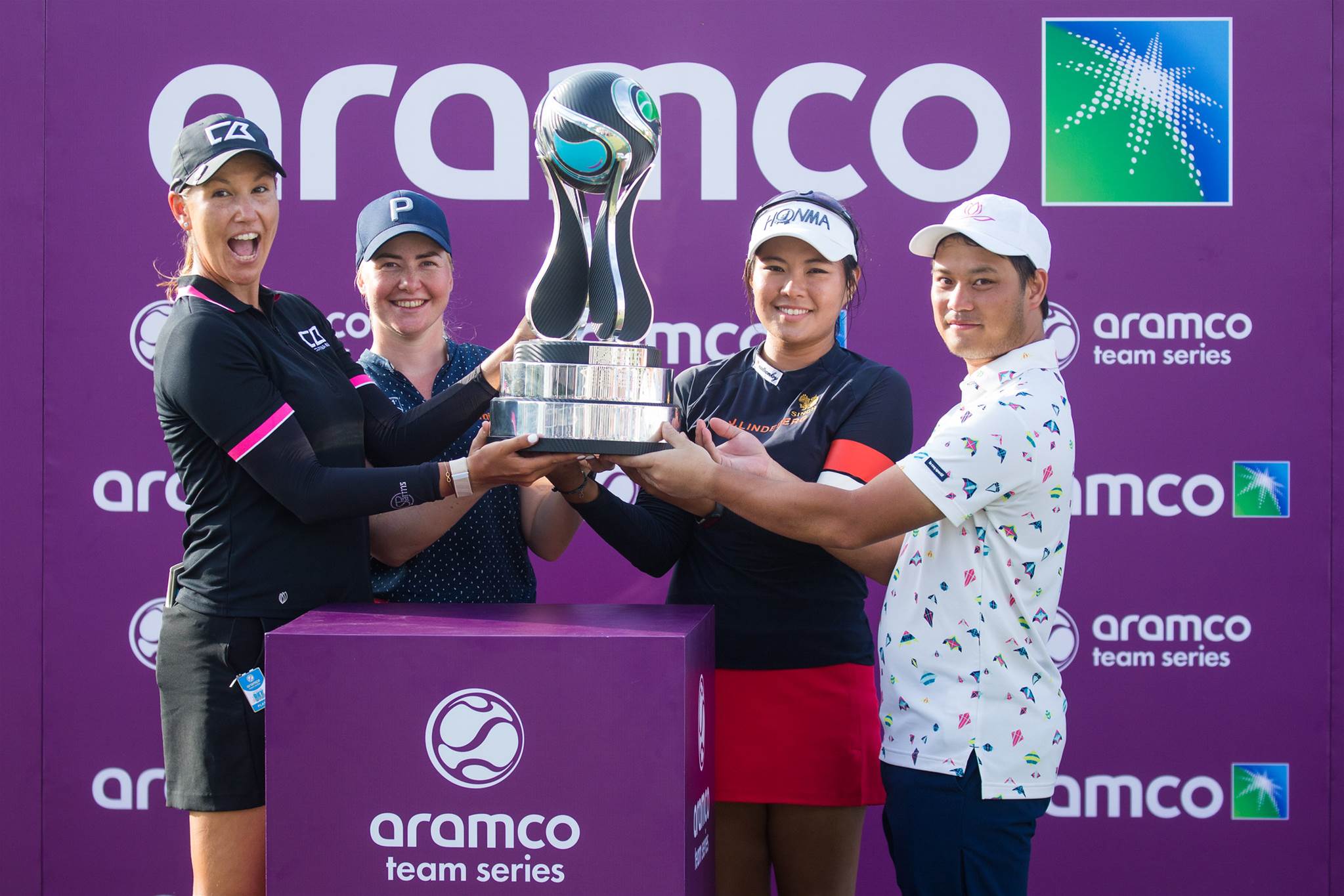 Aussie Whitney Hillier led her team to victory in the teams competition one day before the final round. PHOTO: Ladies European Tour.

“It was actually a really good day. I started quite strongly. I was hitting it quite close, made birdie on the 2nd. I just stayed patient and I dropped in some good putts.

“I’ve been working hard on my game, just trying to stay patient for the win. I was really hoping for this last year, so I'm really happy I got it now this year.”

The 30-year-old added: “I have a pretty good record in the Aramco Team Series events – I've picked good teams! But I love it. The first few days I really played for the team. They really pushed to make a lot of birdies. Yeah, super happy. I mean, it’s been a long time for me. I fought really hard and I'm happy I came through.”

Three solid under-par rounds from Johanna Gustavsson were enough to earn the Swede a second placed finish as her strong early season form continued in the Thai capital.

“It's been a good week,” said Gustavsson. “I've had fun with the girls in the team event, and today was very fun. I really enjoyed playing with Ariya [Jutanugarn] and Tiia [Koivisto].

“My putting has been decent. Yesterday, I did struggle a little bit, but I got through it. Then I holed a lot of putts in the middle of the round, which was nice. Today, that was my only concern, but I thought I got through it pretty nicely and I'm proud of that and happy with it.”

The Aramco Team Series - Bangkok was only the third LET event of the season for Scotland’s Kylie Henry, who returned to professional competition in March following four months out of the game with a broken elbow.

A second three-under-par 69 in three days took her to eight-under-par for the week, and a share of third spot alongside hometown hero Tavatanakit.

“I played really solid today,” said Henry, who injured herself when she slipped coming out of a bath last November. “I felt like I could really trust my swing all week, so I was really happy with my long game.

“I putted mostly good. Missed a few out there, but, yeah, I guess that's going to happen sometimes. On the whole, I'm absolutely delighted.”

Played over three days, this was the first Aramco Team Series tournament to run under 2022’s new format, in which its $500,000 prize-fund team element – where three LET professionals team up with an amateur golfer – is battled out over only 36 holes.