Former World No.1 Jason Day has received a gift from the wind gods to make the cut on the number at the PGA Championship, keeping the door ajar for a weekend surge to a US Open berth.

Day entered the week at 65th in the world rankings, his lowest spot since 2010.

He needed to move inside the top 60 to earn a ticket to the US Open to be held at San Diego's Torrey Pines – a venue where he won two of his 12 PGA Tour titles.

But rounds of 74-75 at Kiawah Island's Ocean Course left the 33-year-old at five-over, trending outside the cut line by three shots after the morning wave.

The disappointed Queenslander was resigned to missing out on further play.

But high winds wreaked havoc in the afternoon, something US Open champion Bryson DeChambeau reminded Day could happen as the two crossed paths on Friday.

Day was packing his bag as DeChambeau headed out to prepare for his afternoon tee time.

"Don't do what I did. It was an expensive mistake," DeChambeau joked to Day in reference to a mercy dash during the PGA Tour's Wells Fargo Championship two weeks ago.

The big-hitting bomber thought he had missed the cut and flew from North Carolina to Texas only to find out on arrival he was still alive, leaving him to fly back again.

It is a good thing the Australian listened.

Day will not focus on the US Open scenarios over the weekend, instead he will be looking to see improvement in his putting, which in turn will take care of everything.

"I've just got to work on my game," Day, who is expecting a fourth child next week, said.

"It's funny; I feel really positive about my game. There's a lot of good signs out there. I just somehow have got to get over the putting part.

"It's that when I stand in there, I can't trust where I'm lining up because it feels like I'm aiming so far right, but I'm aiming straight.

"So when you get in there and you feel like you're cross-eyed, you can't trust the lines, and that's just the way it's been over the last year-and-a-half.

"Once I figure that out and get my putting back, then good play will come back." 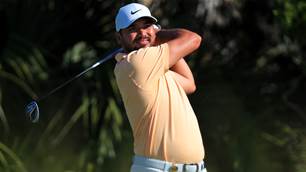 Day trying to regain top form ahead of PGA