Canada’s Corey Conners played a relatively stress-free opening round at the 103rd PGA Championship on Thursday, doing so at a demanding venue that doles those out about as often as Ebenezer Scrooge hands out schillings.

Even with familiar winds from the east that hovered in the 10-15 mph range for the afternoon rounds, Kiawah Island’s Ocean Course proved a brute. Conners, a man known most for his stellar ball striking, heated up the putter in the South Carolina sunshine, and conquered one of the PGA’s sternest tests to the tune of 5-under 67.

Only six other players managed to shoot in the 60s, all with 3-under 69s. That group that includes two-time PGA champion Brooks Koepka and 2011 PGA champion Keegan Bradley. Brooks Koepka is in contention because in his words "It's a major". PHOTO: Jamie Squire/Getty Images.

Conners, 29, a rising player (he is ranked 39th in the world) who has played big in big events in 2021, had but one blemish on his card, a bogey at the par-4 ninth, where his approach from 186 yards finished over the green. He still made the turn in 34, then tacked on birdies at the 11th, 15th and 16th holes to post the round of the day.

“I kind of started the day thinking, ‘Why not me?’” said Conners, who tied for seventh at the Players Championship and tied for eighth at the Masters. “There’s birdies to be had. Just play with patience. You know, take advantage of the opportunities when they present themselves.”

Conners is known as a high-talent ball striker who might contend more often if he putted better (he ranks 86th on the PGA Tour in Strokes Gained: Putting).

He worked hard on the greens earlier this week, using a metronome to find more rhythm in his stroke. He needed only 24 putts in his opening round, making a 33-footer for birdie at the par-3 fifth and burying a key 55-footer from just off the front of the difficult par-4 15th.

In Thursday’s winds, players directly into the wind after the 13th hole for a rugged finishing stretch, and Conners played his last five in 2 under. He nearly added one more birdie at 18, but missed a chance from 13 feet.

“I knew those holes were difficult,” Conners said. “As soon as you make the turn back into the wind on 14, the last few holes, they are all beasts. You don’t really get any short clubs in your hand. You’ve got to hit solid shots, or you’re going to pay the price.”

He started his round by making a mess of his opening hole, the relatively innocuous 10th, making double-bogey 6. He chose the wrong club off the tee and trying to get back on the fairway hit a steep grass bunker face with his second shot. “Deserved every bit of that double bogey,” he said.

It apparently woke him up like a glass of 3 a.m. ice water to the face. 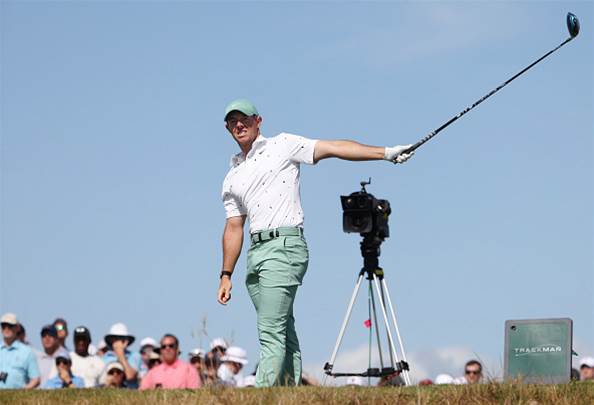 Rory McIlroy who won here in 2012, struggled to a 75 on Thursday, while Dustin Johnson had one more for a 76. PHOTO: Jamie Squire/Getty Images.

Slowed by a knee injury that prohibits him from bending to read putts, Koepka played beautifully from that point, making six birdies against a lone bogey.

His explanation for the great play? It’s a major. And Koepka, who has won four of golf’s biggest trophies (two PGAs, two U.S. Opens) will always be ready.

“It's a major. I'm going to show up. I'm ready to play,” Koepka said. “I’ve been itching to do this since Augusta. I mean, I feel so much better now. I don't need to be a hundred percent to be able to play good.

“It wasn't ideal, the start, and knowing you've got that coming out. It was nice to get it back to even before I turned back into the wind (at No. 14). At the same time, you can't do that stuff if you want to win. You've just got to be more focused. I don't know if that's just the decision I made on 10th. I don't know if that's a lack of not playing or what. I don't know, it was just stupid. I was able to recover, I guess.”

RELATED: What they said after round one

Koepka is accustomed to fast starts at the PGA. He shot an opening round in the 60s for the sixth consecutive time at the PGA Championship, dating to 2016 at Baltusrol.

Koepka made a great escape on a day when many of the top players in the game did not. World No. 1 Dustin Johnson, playing a major in his home state, shot 76. World No. 2 Justin Thomas shot 75, as did Rory McIlroy, who won by eight shots the last time the PGA Championship was on the island.

“It doesn't take much around here, and when you make that turn back into the wind, you're not expecting to make a ton of birdies on the way in,” said Steve Stricker, who opened with 76. He was rolling along nicely, then made triple bogey at the par-4 13th. “So that's the challenge is to get, you know, as many under as you can before you turn around at 14 and start heading in.”

Michigan’s Ben Cook, PGA Director of Instruction at Yankee Springs Golf Course and one of three pros in the field who spends his winter at John’s Island Golf Club in Vero Beach, shot the top round among the Team of 20 club professionals, carding an even-par 72, which ties him for 31st. Brad Marek, PGA Teaching Professional at Corica Park, opened with 73.