Cobra Golf has introduced its new RADSPEED family. Featuring ‘Radial Weighting’ throughout the entire range, the company’s latest innovative release is set to arrive in Australian golf shops on January 21.

Named to reflect its key, innovative technology, Radial Weighting, the entire line of metalwoods is aimed at maximising performance for the full spectrum of players through optimised weighting and an array of advanced technologies. The design concept originated from a popular formula in engineering called ‘Radius of Gyration’, which is the distance from the club’s centre of gravity to each weight or technology location.

COBRA’s engineers discovered that by increasing the Radius of Gyration and the distance between the front and back weights, they could create the perfect blend of fast ball speed, low spin, and forgiveness in one driver. Utilising Radial Weighting, the weight is strategically positioned in each of the three new driver models, creating three distinct performances. 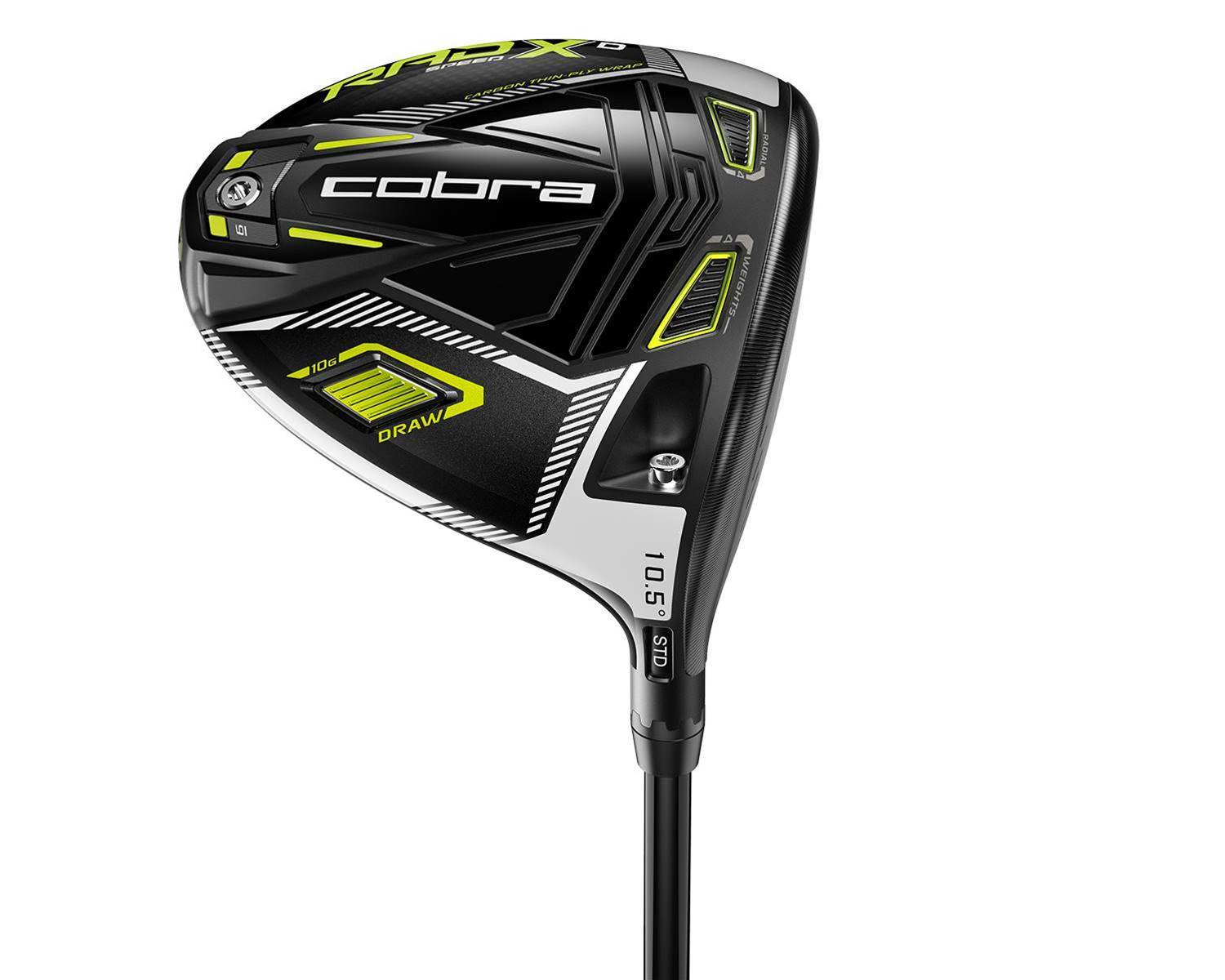 The new RADSPEED driver is designed with a 460cc traditional shape, and forward-biased Radial Weighting to appeal to the better player seeking low spin, low launch and workability. The chassis features 28 grams positioned in the front and an additional 10g positioned in the back to create the perfect balance of front and back weighting for speed and stability.

By pushing the weight as far forward and as far back as possible, COBRA engineers were able to design a driver capable of providing the fastest ball speed with extreme forgiveness – an engineering feat that has not been achieved until now. Using a lighter ‘T-Bar Speed Chassis’ and a thinner ‘Carbon Fibre Wrap Crown’, engineers were able to save 13g that they could reposition forward to lower the centre of gravity (CG) and produce more speed.

Two adjustable weights in the front and back allow players to fine-tune their desired launch and spin performance. A final but very notable feature of the new RADSPEED driver is the ‘CNC Milled Infinity Face’, which requires about 25 minutes of milling for every single clubface produced.

COBRA’s proprietary CNC milling process is a significant advancement over the traditional hand polishing method and produces thickness and bulge and roll tolerances that are up to five times more precise. This process ensures consistent performance on every driver, which delivers thinner faces for maximum ball speed and perfect curvatures for forgiveness on off-centre hits.

For players who want plenty of speed and distance but value forgiveness, and a club that flies effortlessly straight, the RADSPEED XB is the answer. One of the two “Xtreme” versions in the RADSPEED lineup, the XB (Xtreme Back) features an oversized address profile that inspires confidence on the tee. The 460cc clubhead utilises rear-biased Radial Weighting to deliver the fastest and straightest ball flight of the three models.

The driver features 20g positioned in the back and 8g in the front, making the XB arguably COBRA’s fastest and most forgiving driver to date.

The RADSPEED XD debuts as the newest addition to COBRA’s driver offerings, answering the need for a draw-biased, straight-neck driver.

“Our new RADSPEED drivers represent a true breakthrough in performance,” said Tom Olsavsky, Vice President of R&D, COBRA Golf. “Our engineers have outdone themselves by pushing the Radius of Gyration to new levels and delivering three distinct drivers aimed at three different types of golfers. With the RADSPEED driver family, COBRA can truly offer optimised performance for everyone from Tour players to weekend warriors and those who need help correcting a slice.”

Complementing the innovative line of RADSPEED drivers are a full line up of RADSPEED fairway metals. 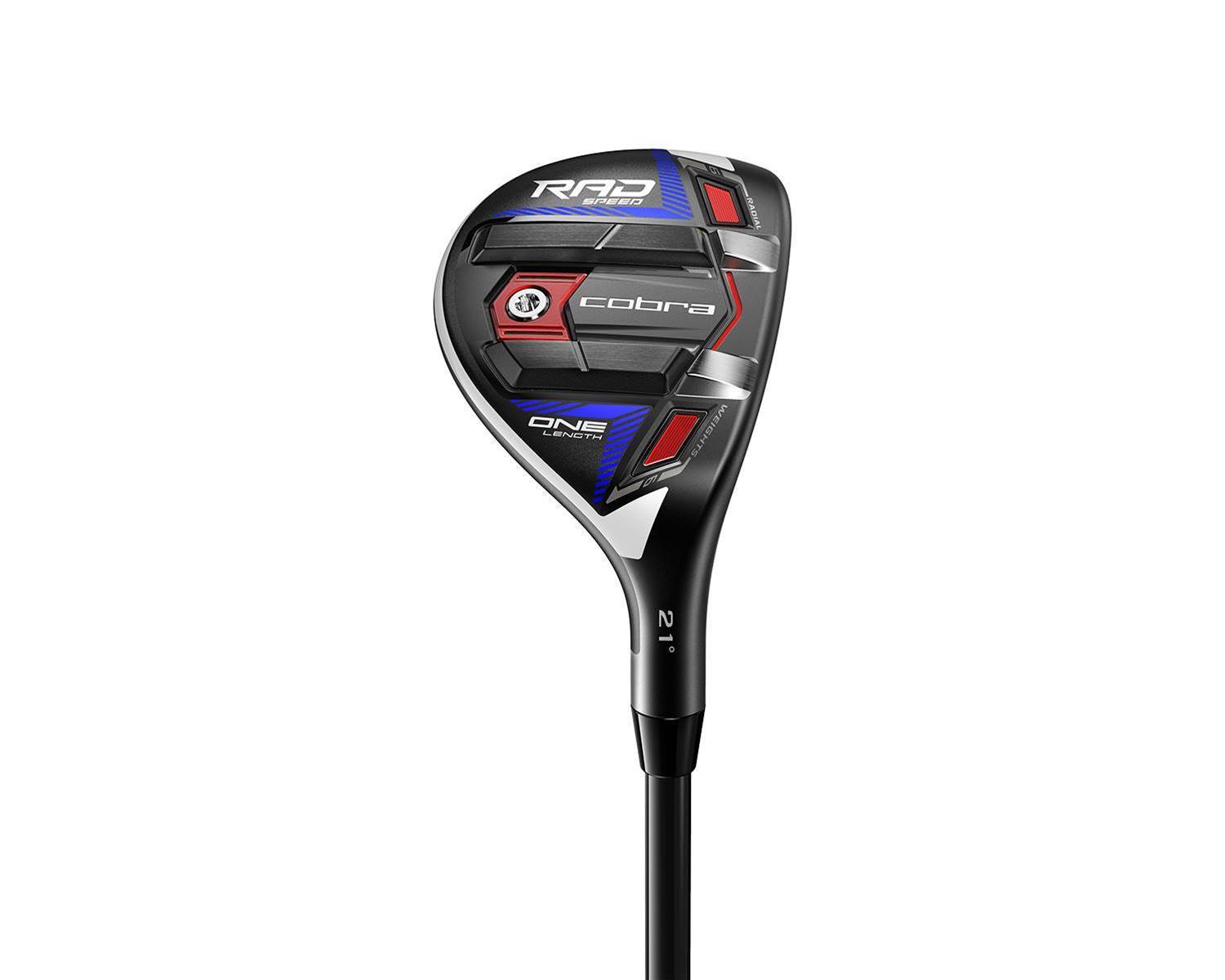 RADSPEED features a traditional shape with a balance of front and back Radial Weighting to deliver ultra-low spin, with high launch and forgiveness. A CNC Milled Infinity Face makes its way into the RADSPEED fairway for the first time, creating a face design that is up to 5 times more precise than hand-polished fairways.

RADSPEED BIG TOUR feature 23g of front-biased Radial Weighting. The Big Tour 3-wood features a slightly oversized profile, and a stronger loft setting, making it the fastest, and lowest-spinning fairway in the lineup, and the perfect complement to the RADSPEED driver, whether off the tee or on the fairway.

RADSPEED hybrids, which are available in both standard and ONE Length models, also utilise COBRA’s innovative Radial Weighting Technology with the emphasis on extreme front weighting for ultra-low spin, faster ball speed, and increased distance.

A forged, high-strength steel face insert, and Hollow Split Rails combine to create a lower CG location, higher launch angles, more distance, and enhanced versatility from a variety of lies. The Baffler sole rails are a signature feature of COBRA’s fairways and hybrids, and allow the club to glide effortlessly out of the fairway, tight lies, thick rough and even bunkers.

The new RADSPEED irons are COBRA’s most technologically advanced irons to date.

The RADSPEED Variable and ONE Length irons feature game-changing innovations including Radial Weighting and debut the first ever 3D printed nylon medallion.

Earlier this year, COBRA announced their partnership with HP & Parmatech and successfully became the first major OEM to pioneer 3D printing in golf club manufacturing with the launch of its Limited Edition KING Supersport-35 putter. 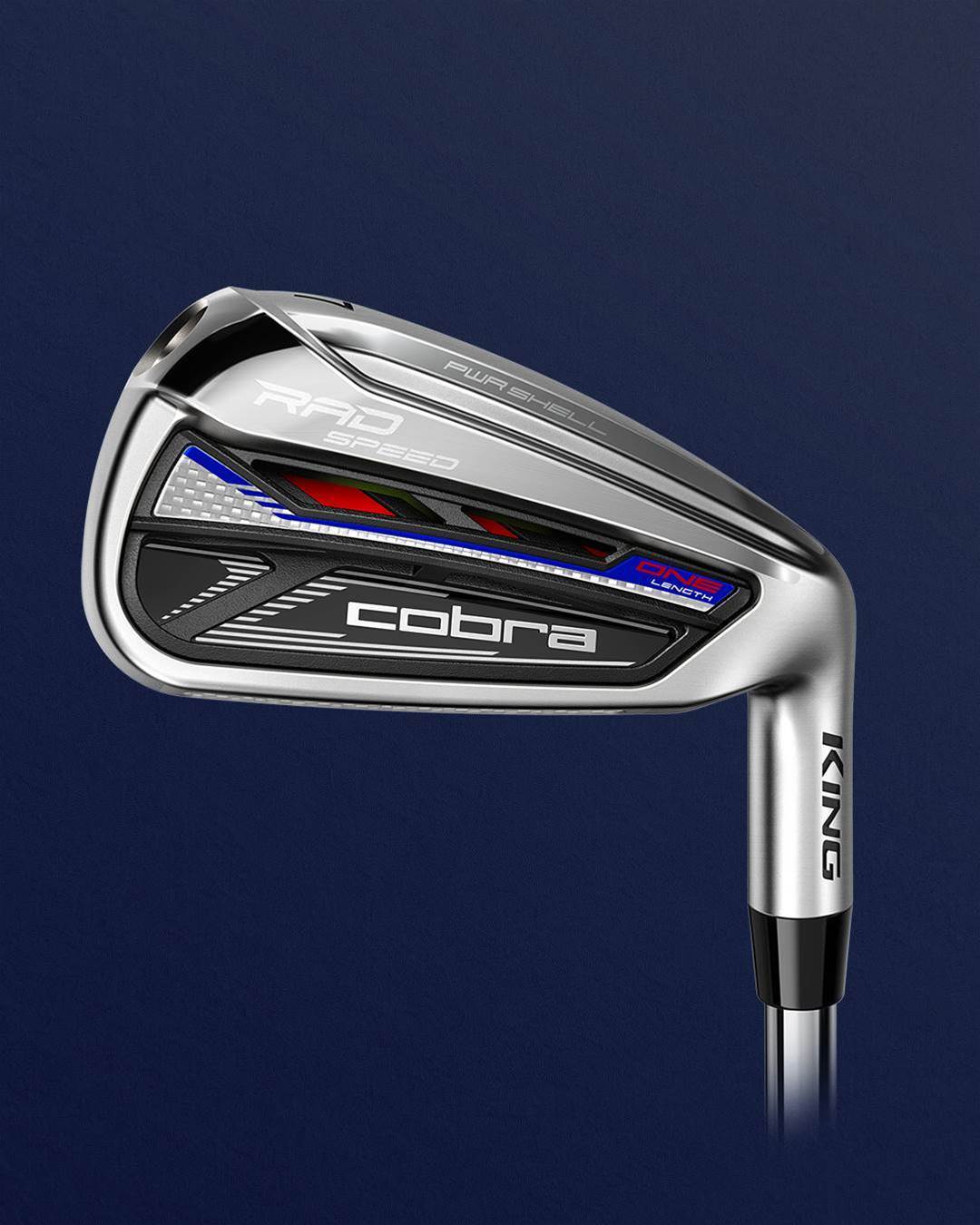 3D printing presents significant advantages over traditional manufacturing methods, allowing COBRA engineers to design, prototype and test multiple iterations and bring products to market much faster. The 3D printed medallion featured in the RADSPEED irons is the brand’s second application of 3D printing and sets the stage for more innovations to be seen from COBRA Golf in the future using 3D printing.

This first ever 3D printed nylon medallion utilizes an intricate lattice structure to save weight and fine tune feel. Upon closer review, golfers may notice the detailed lattice structure provides a window into the cavity and through the medallion. The medallion reduces weight to lower the CG and damp harsh vibrations at impact delivering a soft feel and great response to the golfer.

With a name inspired by its key technology, Radial Weighting, the design of these irons is aimed at maximizing performance through the strategic placement of weight relative to the CG to optimise speed and forgiveness.

COBRA engineers discovered that by positioning more mass low on the heel and toe (the two furthest points from the CG while remaining low in the head), they could lower the CG while dramatically improving the stability of the clubhead. 10g, in the form of a screw-in weight, is positioned in the toe and 3g of mass, is positioned in the heel to create the best combination of low CG, and high moment of inertia (MOI) for fast ball speed and high launch.

The 10g screw is a nominal weight used by COBRA to guarantee perfect head weights for improved builds. During custom builds this weight may be adjusted +/- 6g utilising weights ranging from 4g to 16g in increments of 2g to dial in proper swing weights when customising length or shafts.

This weighting system delivers an iron set that is truly custom built for the golfer. Radial Weighting is a critical component of the design that allows the RADSPEED irons to maintain high launch and maximum carry distance, despite having a stronger loft. In addition, the irons feature a unique ‘Carbon Fibre Topline’ that saves 2g to lower the CG and improve launch and spin characteristics. An all new black carbon fibre cosmetic creates the appearance of a thinner topline for a sleeker and more compact look at address.

COBRA’s patented ‘PWRSHELL’ technology continues to offer increased speed and higher launch even on stronger lofted irons. The forged PWRSHELL face insert in the RADSPEED iron is made of a high strength 17-4 stainless steel, allowing for a thinner and more flexible face design that increases ball speed on and around the sweet spot.

In addition to the above-mentioned technologies, the RADSPEED variable length irons feature progressive head shapes (two-piece metalwood construction on 4-7i and one-piece construction on 8-SW), groove shapes (V groove for reduced spin in the long irons and U groove for added spin in the short irons), and hosel lengths (shorter in the long irons and taller in the wedges) to optimise distance, launch characteristics, and accuracy for each respective iron category.

The RADSPEED One Length irons offer all the magic of RADSPEED technology in a set design that promotes one repeatable setup and swing – for more consistency and accuracy.

COBRA achieves this simplified approach by offering matching lengths (37.50 inches), head weights and swing weights in every iron. In addition, the use of fine-tuned lie angles and progressive shaft weighting promotes high launch and forgiveness in the long irons, and lower launch with more control in the scoring irons and wedges.

Starting at 6-iron to 4-iron, the sole widths get progressively wider (vs. Variable length) to ensure deeper CGs delivering easy up and higher ball flights. This change in CG helps to deliver proper distance gapping in the longer irons that most golfers struggle with.

Electronically enabled sensors are embedded into the grip, automatically recording the distance and accuracy of every shot so golfers can track performance round-to-round and use analysis to improve practice sessions.

Golfers also have access to Arccos Caddie, which utilises Artificial Intelligence to make better on-course decisions for lower scores. With the purchase of any COBRA CONNECT club, golfers can request additional sensors to screw in the rest of their clubs, delivering the full benefits of COBRA CONNECT technology.