There have never been more options when it comes to choosing the clubs for the top of your bag ... Here’s how to make sure you get it right.

How confident are you about how far each club goes once you get above something like a 6 or 7-iron? For lots of us, a 5-iron goes “about the same distance” as a 4-iron or hybrid, then there’s a big jump to a 3-wood. That kind of set-up will hurt your game.

We are allowed to carry 14 clubs for a reason – to cover off everything from 50 to 200-plus metres with a full swing. If three of those clubs go roughly the same distance – or if they’re so inconsistent you hardly ever use them – you need to fix the gapping at the top of your bag.

We’ve talked to some top clubfitters to work out which type of clubs perform better at certain swing speeds – which carry furthest, launch highest (so stop faster) and which are most forgiving.

We’ve broken the swing down into three common club golfer swing speeds – 105mph, 95mph and 85mph – based on insight from those club fitters. We’ve split each swing speed up depending on whether you prefer to hit – fairway woods, hybrids or long irons – and given some of our favourite options in each category.

If your swing is around … 85mph … Modern fairway woods and wide-body hybrids are designed for exactly you. 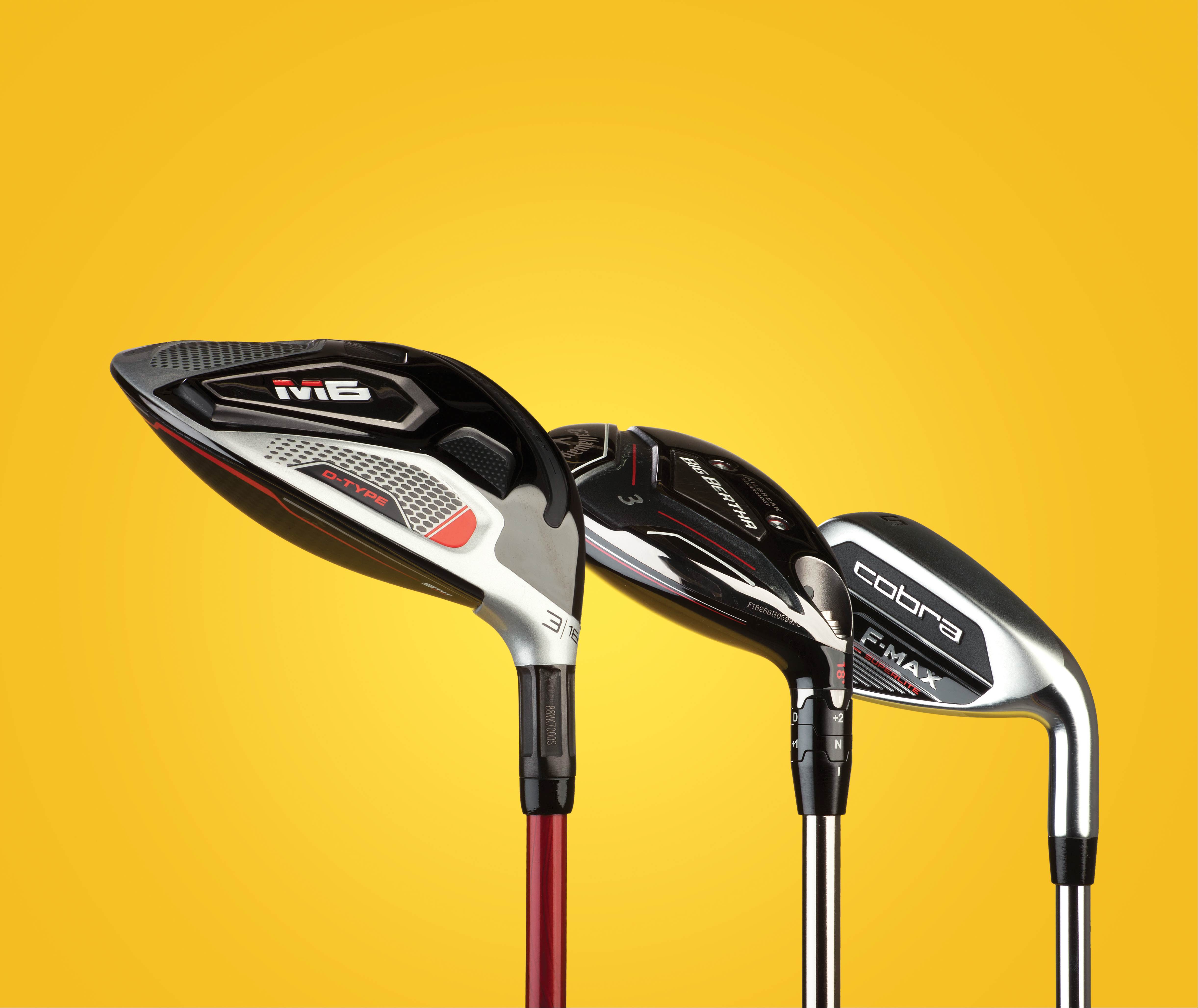 When we say 85mph, we mean that’s your club speed with a driver, not a fairway wood, hybrid or iron. It’s frequently referred to as a “moderate” swing speed, and more and more brands make ranges tailored to it.

Once they get over 60, many golfers lose about 0.5mph every year from their swing speed, and a 2.5mph loss over five years has a huge influence on how you launch shots into the air. Don’t be afraid to go deep into the set with fairways or hybrids – 2009 US PGA Champ Y.E. Yang had a 3-wood, 2-, 4- and 5-hybrid in his bag for this year’s US PGA Championship at Bethpage Black.

At this swing speed there’s little doubt for the majority of golfers that fairway woods and hybrids help launch shots into the air and keep them there for longer. It’s down to their wider bodies and deeper centre of gravity location. It’s widely accepted by fitters that the lower the swing speed, the more head-covers a golfer should have in their bag.

If you prefer hitting fairways before irons or hybrids, give serious thought to really high lofted fairway woods. Callaway makes a 7W (21°), 9W (23°) and 11W (25° – almost a Big Bertha 6-iron!), as part of its Epic Flash line-up. TaylorMade and PING both offer a 9-wood in the M6 and G410 ranges, and Cobra makes the lighter F-Max Superlite family which is aimed at this swing speed.

It’s also worth giving serious thought to draw-biased models, as golfers with moderate swing speeds often need a little help squaring the club at impact (which helps counteract a slice).

PING’s G410 SFT and the TaylorMade M6 D-Type fairways have been designed with slightly bigger, wider heads, extra heel side weighting, along with extra loft and a lighter swing speed specifically for this type of player.

Proper custom fitting is all about listening and learning from a golfer’s individual game, and if you prefer hitting hybrids instead of fairways or long irons, there are plenty of options.

Think seriously about wide-body heads like Callaway’s Big Bertha, as the deeper centre of gravity makes them very playable at this swing speed. And don’t be afraid to look at replacing down to a 7-iron (or more) with hybrids; that’s exactly why Callaway makes 3H-8H (where the 8H has a 33° loft, almost the same as a Big Bertha 8-iron) in the Big Bertha family.

Adjustable hosels mean you can dial in specific lofts to fill your own yardage gaps, too. PING’s G410 hybrid also has extra draw bias in the higher lofts.

It’s generally accepted if you can hit long irons, they’ll be slightly more accurate than a hybrid or fairway thanks to the shorter shaft reducing dispersion. At this speed it’s likely your set will stop at a 6-iron, and it’s very common to need bigger loft gaps between your clubs to see good carry distance gaps.

If you insist on using long irons rather than fairways and hybrids, look at lighter ranges, and those that don’t have the strongest lofts, as extra loft helps flight shots better at moderate swing speeds. Our picks would be Cobra’s F-Max Superlite, Callaway’s Big Bertha and TaylorMade’s M CGB.

The absolute best way of getting your gapping spot on is working with an experienced fitter and using a launch monitor like Foresight Sports’ GC Quad. Establish which is the longest iron you hit with any confidence and how far you hit it. Then hit your driver, make a note of how far it goes, then work on filling the gaps between your longest iron and driver with the clubs that not only fill you with confidence, but also cover off consistent yardage gaps between the pair.

Be prepared to hit a decent amount of shots – many fitters will look at your long game like this when you buy a set of irons, just to make sure you get the right set-up for your game.

Ryder Cup equipment round up