It was a bittersweet upset victory for Aliea Clark on Monday at Berkeley Hall Club.

The 25-year-old not only defeated record-setting medallist and top seed Jennifer Peng, 1-up, in the Round of 64 of the 34th U.S. Women’s Mid-Amateur Championship on the club’s North Course, but a close friend as well.

“I really wish we could’ve seen each other later in the pairings, but it was a great day with Jen today,” said Clark, who is competing in her first USGA championship in six years. “I’m just super grateful that I got to be here today. I wasted so many shots during the first two days [of stroke play], I really didn’t feel like I deserved it.”

It was just the fourth time since the championship’s inception in 1987 that the top seed lost in the Round of 64. Kerry Postillion, in 1997, was the last medallist to bow out in the opening round.

“I really wish we could’ve seen each other later in the pairings, but it was a great day with Jen today.” - Aliea Clark.

Clark needed to survive a 5-for-1 playoff on Sunday just to get into the draw, while Peng set 18- and 36-hole championship scoring records of 66 and 136, respectively, to earn medallist honours. But the 23-shot difference in their stroke-play scores meant nothing on Monday as both started from scratch as the match-play portion of the competition commenced.

Adding further intrigue to their opening-round encounter was the fact the duo will compete in a U.S. Women’s Amateur Four-Ball qualifier on October 21, with the hope of landing a spot in next April’s championship proper in Puerto Rico. The two became friends growing up playing junior golf in the San Diego area.

Clark and Peng put on quite a display in a back-and-forth match, combining for nine birdies. They tied holes 2 and 8 with birdies.

“I was joking earlier [that] this course owes me birdies,” said Clark, a former collegiate player at UCLA who posted 83-76 in stroke play. “I came out here with a different mindset and just hit good shots. That’s all I was focused on. I was like, ‘Let’s not think about where the pit of doom is on this green, let’s look at the pin. We know how far it is. Let’s just put a good swing on it.’”

With Peng, a former standout at Yale University, leading by one hole on the par-4 14th, Clark knocked her approach to two feet for a winning birdie to tie the match. She then won the par-5 15th with a par after a short miss by Peng.

“We had a lot of fun out there, catching up and just chatting,” said Peng, who won the stroke-play portion by eight strokes. “It’s disappointing to come up short, but it also has me excited to come back in the future and play in the event again.”

While Peng bowed out, most of the higher seeds prevailed on Monday. Eighth-seeded Erin Houtsma was the only other top-eight seed to be eliminated, falling 1-down to Andrea Kosa.

Defending champion Ina Kim-Schaad easily cruised into the Round of 32 with a 5&4 win over Lauren Shoemaker. 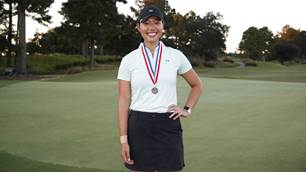 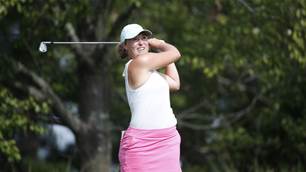 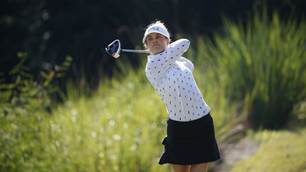 Rookies to face off in U.S. Women's Mid-Amateur final