Fresh off her record-setting breakthrough at last month's Evian Championship in France, Lee will spearhead Australia's eight-strong assault on the AIG Women's Open in Scotland.

"It just sets the bar a little bit higher. I know women's golf has been trending in the right direction. It's just going from strength to strength and getting and better," Lee told AAP ahead of Thursday's opening round.

"I'm pretty speechless. I mean, it's not even a small amount of money but I feel like it's what we deserve and just little bit more motivation to go out there and play well.

"Obviously, it's nice if you can putt well but it's a ball-striker's course. It's going to be really important to strike it well." - Minjee Lee.

"I think we're all going to be excited to go out there and play for more money. I know I am."

Succumbing to a taxing travel schedule, Lee missed the cut at last week's Scottish Open after making the mad scramble back to Europe from the Tokyo Olympics a fortnight after finally landing her elusive maiden major.

But the extra two days off has given her more opportunities to scope the perils of famous Carnoustie – and they aren't hard to find.

"It's just really nice to be able to see the course twice. The fairways are quite tight and obviously the bunkers are pot bunkers so they're quite penalising," said the World No.11.

"You've got to drive the ball it really well here, place it on the fairway and even the first cut is good.

"Obviously, it's nice if you can putt well but it's a ball-striker's course. It's going to be really important to strike it well."

Fellow Aussie big gun Hannah Green also missed the cut last week, after narrowly missing a medal in Tokyo, but Lee doesn't consider it to be any kind of setback to their chances at Carnoustie.

"I feel like I'm in a good place in terms of my ball striking and just knowing the course," she said.

"I've been out a couple of times seeing all of the holes now and I feel like I have a good feel for the greens since practising from Sunday.

"It's just so cool to be here. The course is really, really hard in a lot of respects. There's a lot of difficulty. It's going to be tough for everybody.

"I just think it's going to be a great challenge this week." 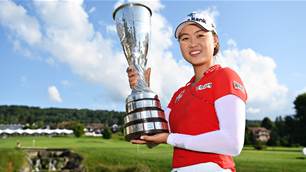