England’s Marcus Armitage had one of those days during the final round of the Porsche European Open.

The man known as ‘The Bullet’ was firing on all cylinders to record a 65 and his first European Tour win after starting the day four back.

Meanwhile, overnight joint leader, Queensland’s Maverick Antcliff signed for a final round 75 to finish in a share of 11th six shots behind Armitage.

The 33-year-old Armitage, who is among the most popular players on Tour for his relaxed attitude and left school at 13, got off to a great start with birdie at the 1st hole at Green Eagle Golf Courses during the third and final round before another at the 3rd. A hole-out eagle at the par-4 7th was then followed by a birdie four at the 9th to make the turn five-under the card and charging up the leaderboard in pursuit of the likes of Antcliff and his fellow 36-hole leader Matthew Southgate.

RIGHT: Maverick Antcliff in action on the final day, where he dropped down the leaderboard after sharing the overnight lead. PHOTO: Christof Koepsel/Getty Images.

Armitage wasn’t done making red numbers yet, with three more birdies on the back nine before an untimely bogey at the 16th hole. The now World No.121 managed to overcome the only blemish on his card for the day, and produced an outstanding up-and-down for par at the next before a par at the last.

With the equal lowest round of the week in the books, Armitage waited to see if any of his challengers could match his eight-under total, with Southgate the final hope before finding the water at the 18th and sharing second with Thomas Detry, Edoardo Molinari and Darius Van Driel at six-under.

“It hasn't really sunk in yet, it's a new feeling I suppose,” an emotional Armitage told the European Tour after the win.

“Twenty years ago I lost my mum and I've dreamt about this since that day, being a winner, and you have days where you think it might not happen but I just stuck at it.

Marcus, she will be proud ❤️

An emotional @marcusarmitage1 after claiming his first European Tour win at the Porsche European Open.#PEO2021 pic.twitter.com/mV7QF2ECsK

“Today is a great day and I'm sure she would be proud, and everybody in my team that's helped me – this one's for me. All those days on my own dealing with life and I'm sure a lot of people do, all those lonely days on my own working on my dream and I think I've got to take a lot of credit for it myself.”

Having made just one bogey for the week over the first two rounds, Antcliff must have felt he was playing a different golf course on Monday as he made four scores over par by the 16th hole.

A birdie at the par-5 last will have made his dinner taste a little better, but with US Open spots on the line, and more importantly a chance at a first European Tour win after a very good start to his year, Antcliff will no doubt be disappointed but take plenty of lessons on board.

Dimi Papadatos was next best of the Aussies, the New South Welshman finishing in a share of 29th, with Jason Scrivener the only other Australian to make the cut and sharing 55th. 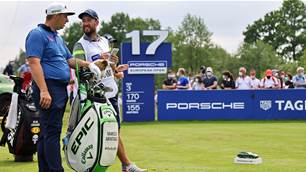