That was followed by the spray of champagne on the 18th green to celebrate a day that will be hard for her to top even at age 22.

With one round, she became a major champion for the first time and reached No.1 in the world.

Just like her performance on Sunday at the Women's PGA Championship.

Korda powered her way to a pair of eagles that wore down Lizette Salas at Atlanta Athletic Club and put an American top of the world ranking for the first time in seven years.

The final stroke was a 15-foot par putt for a four-under 68 and a three-shot victory over Salas.

"The past few days, the battle with Lizette, it's been a lot of fun. It's been stressful. I think it's had everything," Korda said.

"But I just can't believe it. I'm still in shock."

At 19-under 269, she tied the Women's PGA record to par last matched by Inbee Park at Westchester Country Club in 2015.

Korda won for the second straight week – her third LPGA title this year – and it was enough to become the first American at No.1 in the women's world ranking since Stacy Lewis in 2014.

"Is this week even real? The past few days, the battle with Lizette, it's been a lot of fun. It's been stressful. I think it's had everything." – Nelly Korda

Best of the Australians this week was 21-year-old Gabriela Ruffels, who struggled to a three-over 75 on Sunday to finish at even par and tied-33rd.

She was one shot better off than Minjee Lee, who had four birdies in her round of 70 to tie for 40th, while Su Oh (74, six over) was well back.

Korda's older sister, Jessica, 28, was among the first to embrace the champion when it was all said and done.

Jessica finished much earlier – they shared a hug as Nelly was teeing off and Jessica was making the turn – though the older sibling had another reason to celebrate.

She easily held down the fourth American spot for the Olympics in Japan.

It was a big celebration for one of the top sporting families in the world.

The Korda sisters each have six LPGA victories.

Their younger brother, Sebastian, is at Wimbledon this week as the 50th-ranked player in men's tennis and has a chance to join them in Tokyo for the Olympics.

Their father is Petr Korda, who won the Australian Open in tennis in 1998, while their mother Regina – who was on hand in Atlanta – was ranked as high as 26th and played tennis at the 1988 Olympics.

"We're always just striving to achieve more, and for our family just to back each other through every situation ... it's so surreal," Nelly Korda said. 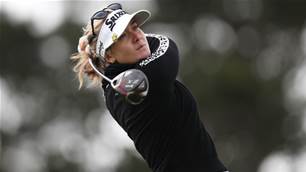