Over the past two decades, northern Tasmania has emerged as a world-class golf destination offering a mix of internationally acclaimed layouts and fun, picturesque courses anyone can play.

Cape Wickham isn’t the only Tasmanian course earning a ‘must-play’ status here and abroad. It’s nearest King Island neighbour – the Graeme Grant-designed, Ocean Dunes – is highly acclaimed and is ranked No.6 in Golf Australia magazine’s list of the Top-100 Public Access Courses in this country. A 45-minute drive south of Cape Wickham, near Currie, Ocean Dunes hosted its first rounds a few months after Cape Wickham opened and it, too, has since received rave reviews. 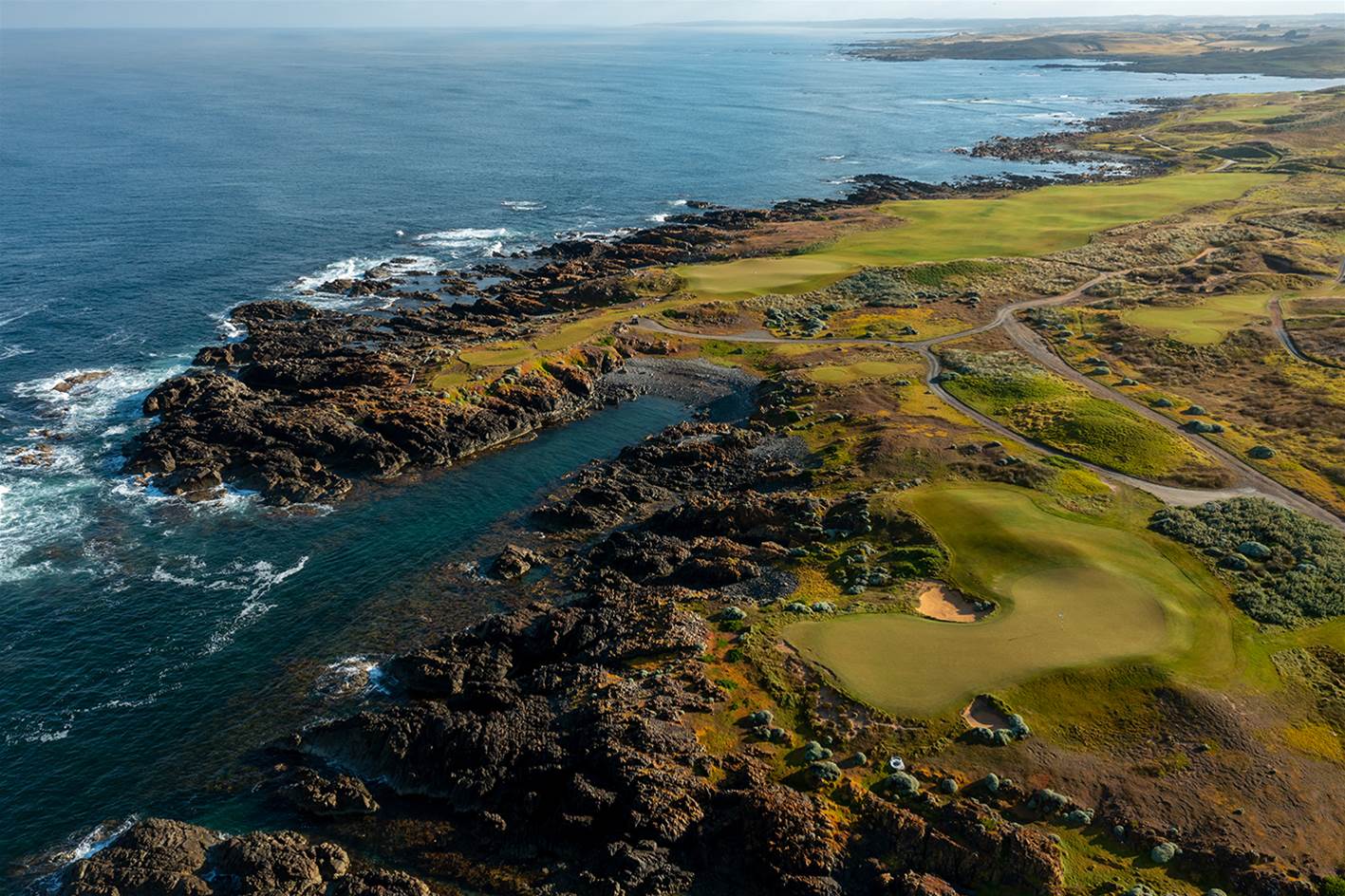 Ocean Dunes' par-3 4th hole is one of the most exciting three-shotters in Australia. PHOTO: Brendan James.

The short walk from the car park to the clubhouse lifts the veil on the dramatic nature of the site on the shore of King Island’s east coast.

“I couldn’t believe how good this site was,” Grant told Golf Australia during construction. “There were golf holes to be found everywhere, not just along the shoreline but through the wide natural valleys created by the dunes. There are some very spectacular ocean holes and then you go inland to the dunes and then there’s a creek that flows through the course, so there’s a lot of variety.

“The quality of the land away from the ocean is such that we didn’t have to move a lot of earth to create some memorable holes.”

Ocean Dunes is exciting from the first tee shot. Grant’s creation opens with a 500-metre par-5 that rises over the crest of a hill as it veers right, around a massive bunker scooped out of the edge of a dune, before plunging down to the green set against the edge of the rocky shoreline. It’s a brilliant opener which offers several options for you to get from tee to green and, once you have reached your destination, the views up and down the coast are truly spectacular.

While the 4th hole will be reached with a short club on most days, there will be times when Mother Nature will turn up the fans and turn this diminutive hole into a beastly test.

Good quality short par-4s are a thrill for all golfers and Ocean Dunes’ 280-metre 2nd hole – known as Outcrop – is already widely regarded among the finest short two-shotters in the country. It is a wide driving hole but the green only opens up to those players prepared to take a route near the right edge of the fairway and the ‘Kelp Track’, which weaves along the shoreline. The further left you go, the more difficult the second shot approach becomes as it is a blind pitch over a bunker carved out of the face of a large dune. There is simply no other green complex in Australia quite like the 2nd. It’s a sliver of a target, which is 45 metres wide but only ten metres at its deepest point. All but the far-right edge of the split-level green is blind as the surface sits between two dunes that create a ramp effect, potentially slinging balls close to, or well away, from the flag. Miss the ‘ramps’ short or long, and the ball will find a sandy, grassy dune or bunkers.

Ocean Dunes’ first of four brilliant par-3s, each with its own wonderful traits, is unforgettable. The 130-metre 4th hole is played across an ocean inlet with rocky edges on both sides of the water. The tee is perched just above the waves, while the expansive bentgrass green features a lone, deep bunker cut into the middle of its front edge. This pinches the target to its narrowest, almost creating two greens left and right of the bunker. While the 4th hole will be reached with a short club on most days, there will be times when Mother Nature will turn up the fans and turn this diminutive hole into a beastly test. 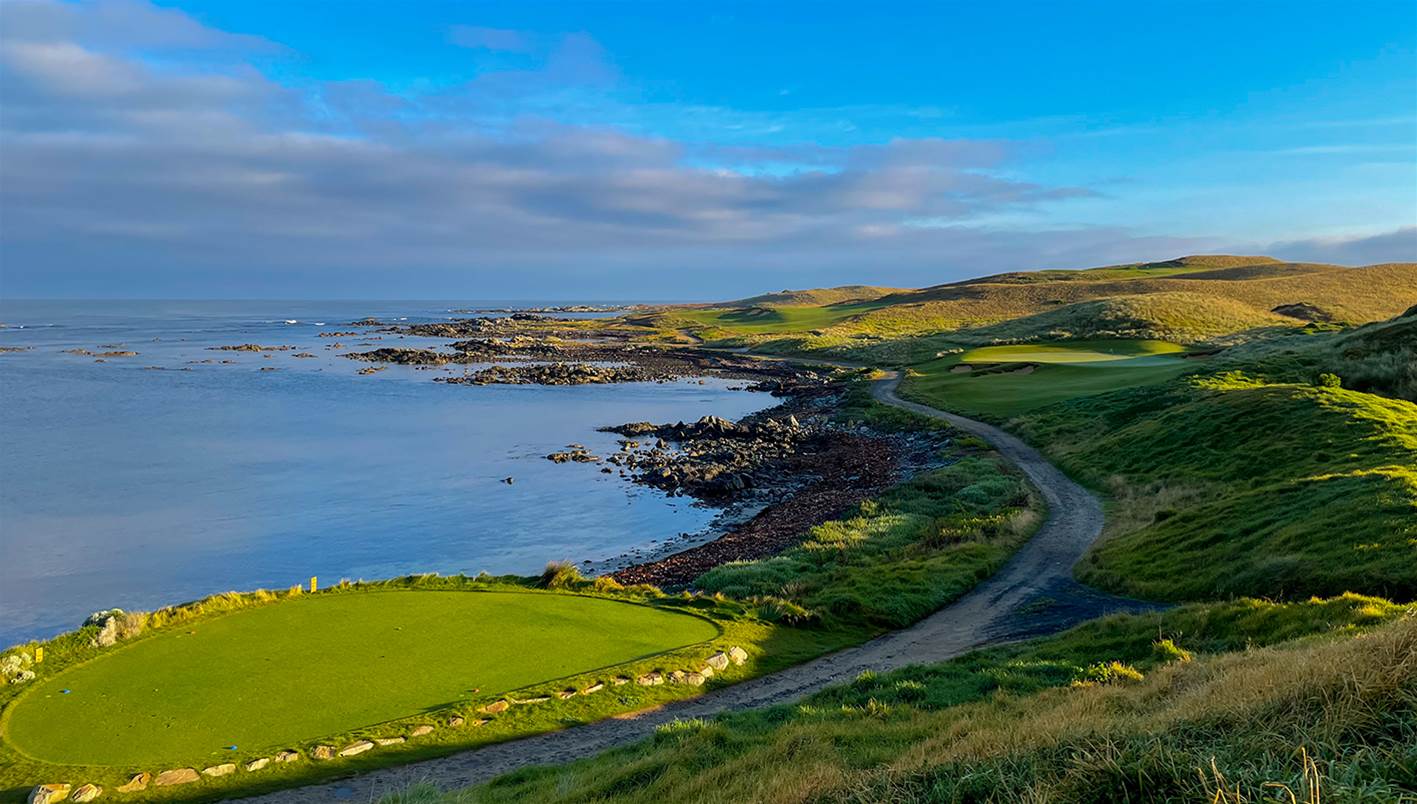 As a visual spectacle the par-3 10th rivals the short 4th but is 70 metres longer. Appropriately named ‘Bay’, each of the tees is separated from the waves of Bass Strait by surrounding rocks. The tee shot here must carry the bay to find land and, ultimately, the large green, which is protected by deep bunkers left and right. It’s a hole demanding a hero tee shot, and if you pull it off you won’t forget it for some time to come.

In just five years, Cape Wickham and Ocean Dunes have put King Island on the world golf map, pulling the little isle’s original course into the global spotlight as well.

The King Island Golf and Bowling Club was the island’s first layout established back in 1932, having moved from grazing land near Currie. For much of its 90 years it existed in relative anonymity. But with golfers significantly increasing the number of tourists visiting the island in the past five years, many have made the wise decision to check out the course.

Word spread throughout the golfing community. In 2019, Golf Australia magazine ranked the layout among the best short courses in the country. A year later an American golf publication put King Island at No.17 in a list of the world’s Top-50 nine-hole courses. The secret, about how good this little gem is, was out.

Technically, it’s not a nine-hole layout. The course has 12 greens as well as alternate tees for both nines. The opening two holes set the scene for an enjoyable round. The first drive is blind to a fairway angled away and off to a green set hard against the base of a long sand dune. It’s not by any means the most difficult par-4 you will play but it is a lot of fun. 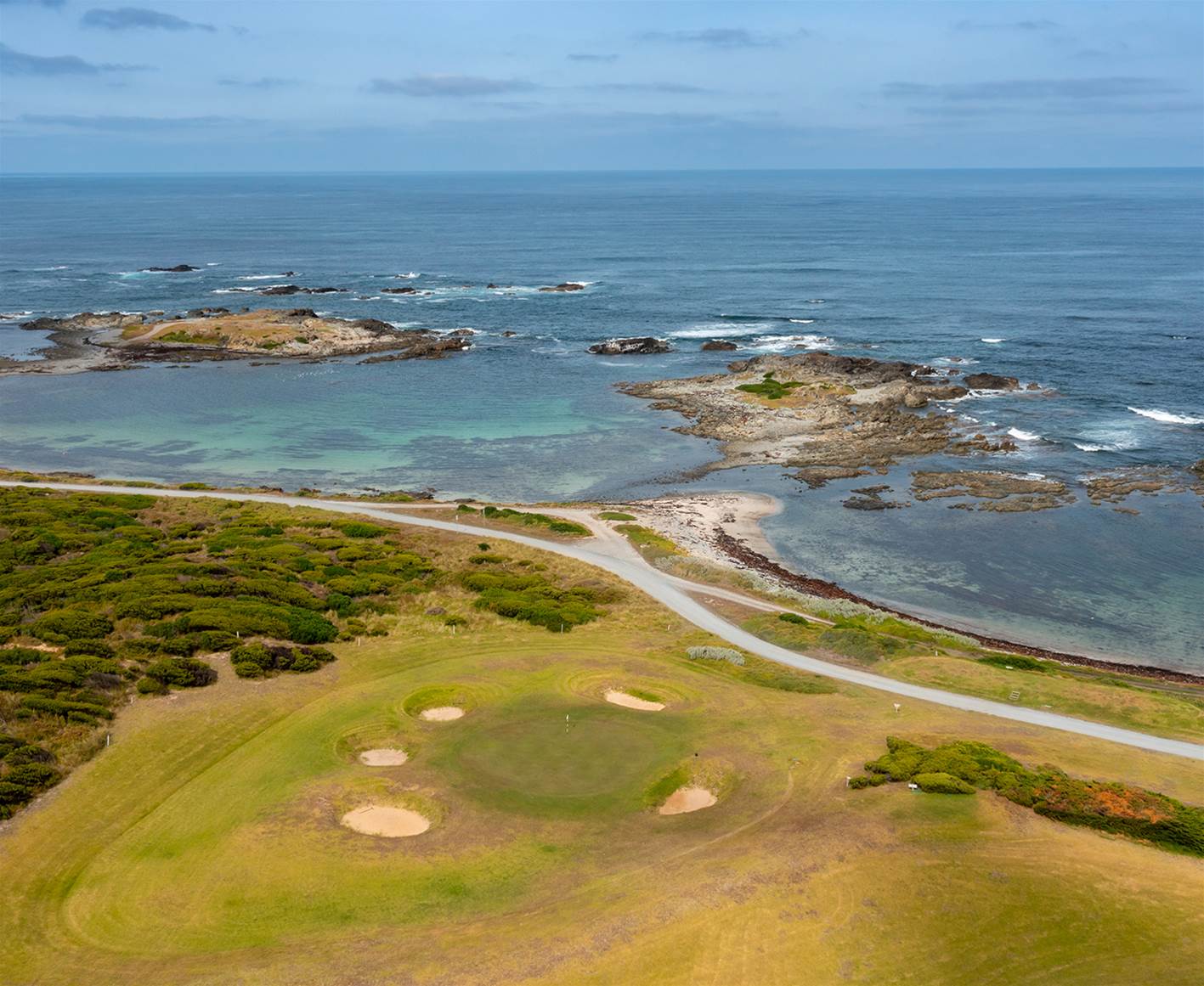 The same can be said for the 2nd/11th, which plays along the ridge of the aforementioned sand dune. The fairway is wide enough but the player who attacks too hard here can find their ball bounding off the firm fairway into the rough and be left with a difficult shot into the smallish green, which slopes markedly from left-to-right and is cut into the edge of a high dune.

The course continues to rise and fall over the dunes before reaching the edge of the Southern Ocean where several holes play to and away from the water and subject players to the full brunt of the elements. This is links golf in a pure form on a course that plays much the same as it did – but in better condition – when locals laid it out in 1932.

Golf was born on the rugged, windswept links of Scotland nearly 600 years ago.
Today, playing across quality linksland – with its firm, fast-running playing surfaces laid across Mother Nature-shaped terrain where sand abounds by the sea – has become revered worldwide.

And it’s easy to see why.

True links golf is a seduction of a golfer’s senses – the smell of the sea, the feel of the wind and the joy of watching the result of a not-quite-perfectly-struck iron bounce left, then right, before catching a slope to trickle down next to the hole.

True links golf in Australia was sadly lacking at the turn of the 21st century. Then came Barnbougle Dunes.

Born out of a three kilometre stretch of Tasmania’s north east coast dominated by untouched sand dunes – land deemed to be of little use to its owner and successful potato farmer, Richard Sattler – Barnbougle Dunes was Australia’s first pure links course built in more than 80 years.

Designed by Tom Doak and Mike Clayton, the layout officially opened in December 2004 and was dubbed one of the best new courses to open in the world that year. It has also finished in the top-three of Golf Australia magazine’s Top-100 Courses ranking ever since.