Over the past two decades, northern Tasmania has emerged as a world-class golf destination offering a mix of internationally acclaimed layouts and fun, picturesque courses anyone can play.

An ankle-high wave breaks on the perfectly crescent-shaped beach of King Island’s Victoria Cove. Another follows four or five seconds later. The clear waters of this sheltered bay glisten a range of blue-ish hues, as a fishing boat bobs gently offshore. A flock of hungry seagulls hover overhead hoping to nab a free feed. The tall fescue grass bordering the beach sways to a constant rhythm on the light breeze as another wave laps the shore.

“Welcome to Cape Wickham,” the young woman says, breaking my gaze from above the rolling 18th hole that hugs the shoreline. “It’s beautiful isn’t it.”

Indeed, it is. In fact, it is probably one of the most beautiful settings for a final hole anywhere on the planet, on a golf course that boasts an ever-growing catalogue of rave reviews from near and far.

Ranked in the Top-100 Courses in the World and the No.1 Public Access Course in Australia, as rated by Golf Australia magazine, Cape Wickham – on the northern tip of Tasmania’s King Island – is simply breath-taking. This is where stunning views combine seamlessly with a well-crafted design by Mike DeVries and Darius Oliver that is superbly maintained. 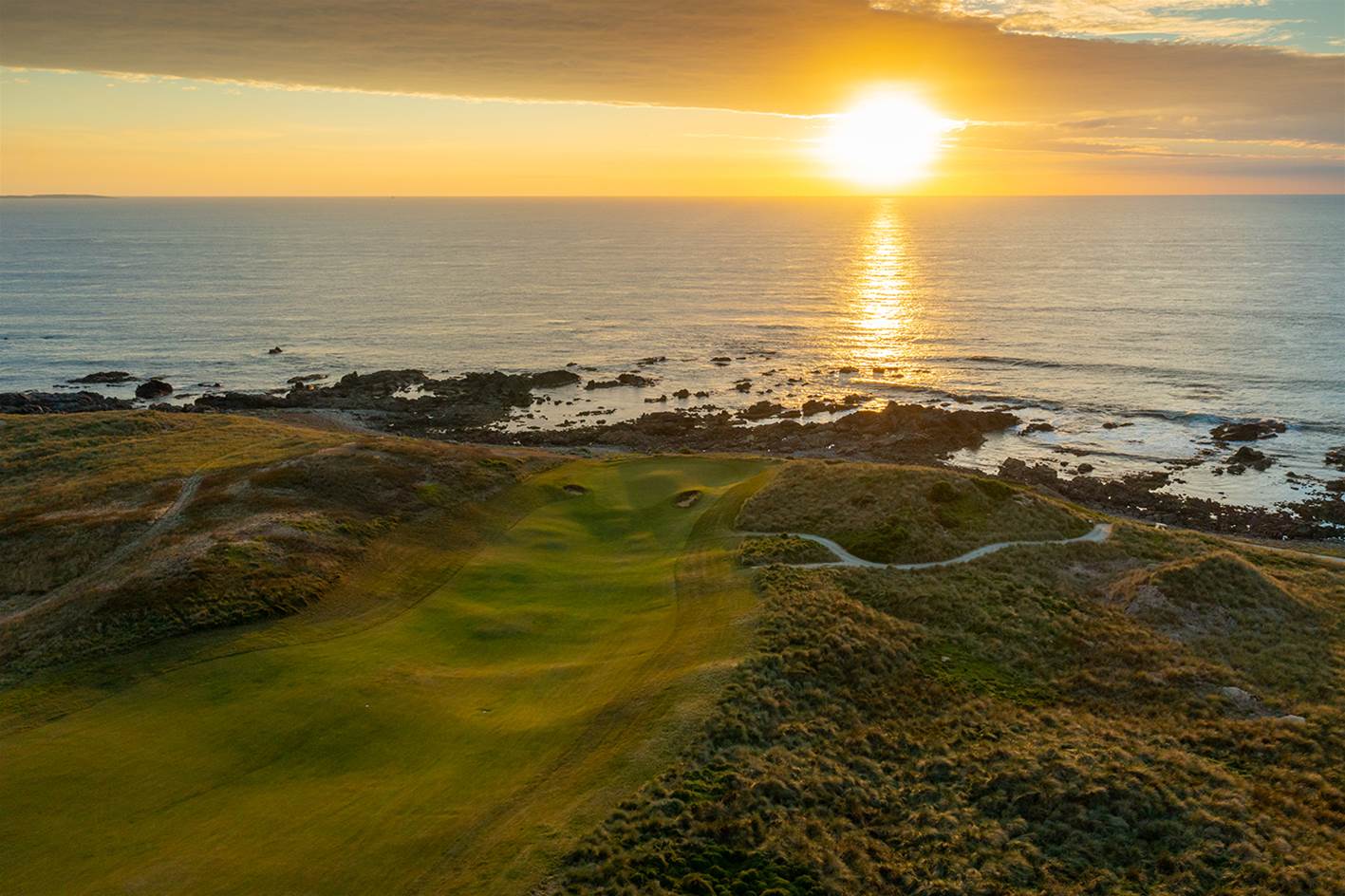 It is just on a decade since former chief of golf course construction company Programmed Turnpoint, Andrew Purchase, discovered this patch of golfing wonderland – struck by the beauty of the Cape Wickham landscape spread out beneath the heritage-listed lighthouse bearing the same name.

Oliver along with the owner and developer of Victoria’s The Dunes and Thirteenth Beach courses, Duncan Andrews, brought American course designer Mike DeVries into the mix as each began to see the enormous potential of the site. Then, after three years of planning and construction, Cape Wickham opened for play in October 2016 and has been a bucket list course for golfers worldwide ever since.

The aforementioned par-4 18th is a major drawcard having been religiously photographed by every visitor in its short history. Google ‘Cape Wickham images’ and its iconic closing hole – incorporating the cove, beach, surrounding sand dunes and lighthouse – will appear. As will plenty of other cracking hero course shots, because Cape Wickham is golf’s version of a supermodel.

Given the quality of the land, designers DeVries and Oliver were careful not to overdo their work. The design is carefully considered, bearing in mind the impact of Mother Nature. DeVries and Oliver could easily have played the role of Dr Frankenstein and produced a monster of a course but, thankfully, opted to create 18 holes of fun and challenging golf with no two rounds ever being the same.

Cape Wickham has been crafted to take the wind strength and direction into account, with generously wide playing corridors and holes providing fair strategies regardless of the wind are the order of the day. A scheme of fairway bunkers might be unreachable one day and squarely in the zone the next. The focus of the design team on playability no matter what the conditions is an enticement to play this layout time and time again to experience all it has to offer … from the serene to the climatically violent.

The opening tee shot provides plenty of excitement as you play to an expansive rolling fairway that is flanked by scrub covered dunes to the left and stops at the edge of a cliff to the right. The 340-metre par-4 is the first of eight holes set hard against the ocean, and while it isn’t the hardest of the bunch it does challenge you to hit the correct side of the fairway to leave the best line into the pin position of the day.

While DeVries and Oliver could easily have hung their hat on the stunning ocean side holes, thankfully they didn’t – and the inland holes at Cape Wickham are as thrilling to play as those by the water. The 447-metre par-5 6th is a fine example. Here, the fairway rises gradually before veering right around a pod of deep bunkers cut into the side of a grassy dune to the right. The massive green is reachable in two shots in the right conditions and the ‘Wickham experienced’ player will aim left of the greenside bunkers and let the dramatic slopes feed their ball around to a right half flag. 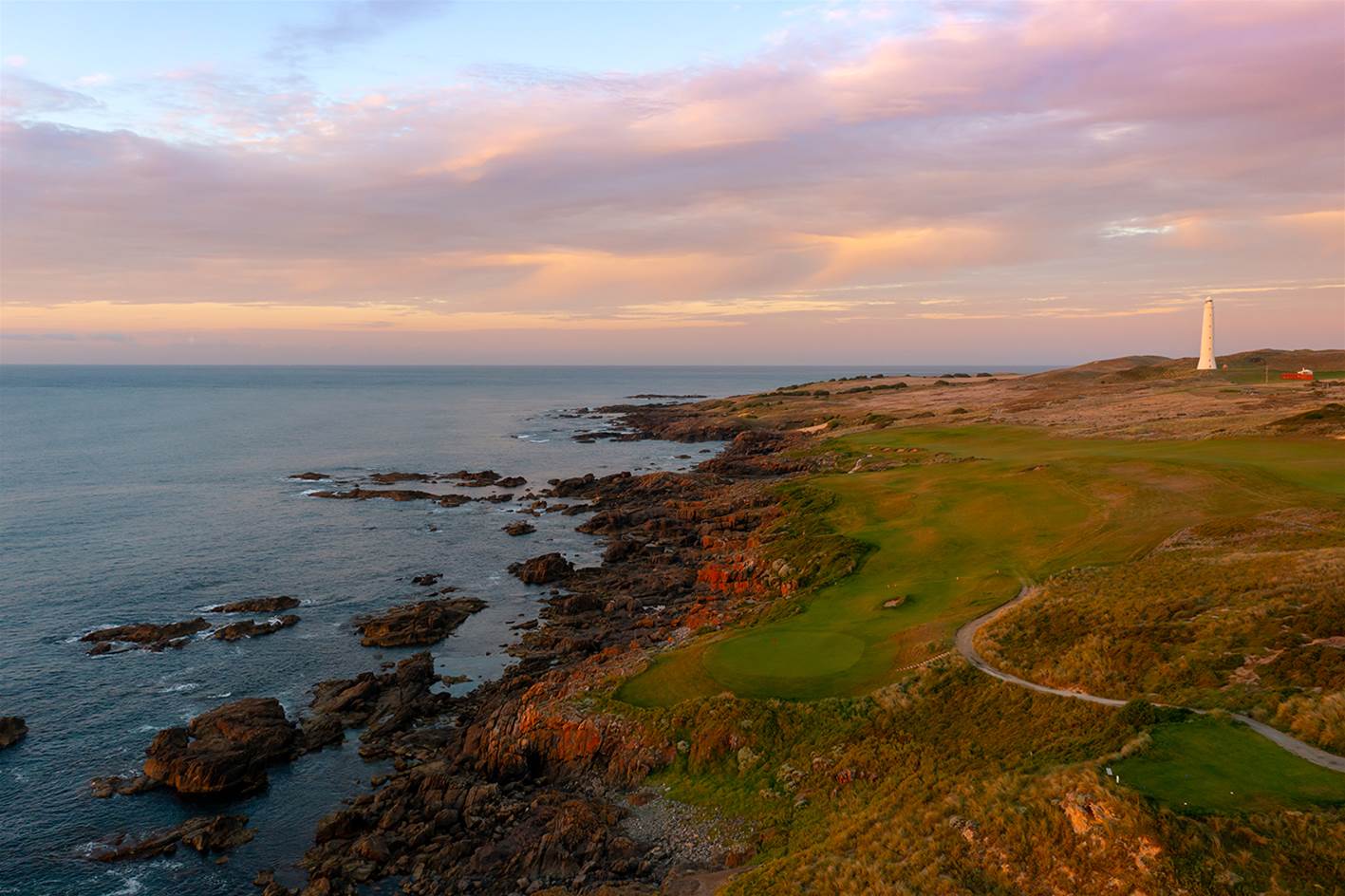 The seaside par-3s at the 3rd, 11th and 17th will always catch the attention of photographers, although one of the best to play is the 7th. The hole climbs slightly during its 137 metres to a green angled from front left to back right with a giant swale capturing any shot coming up short or right. A hump short and left and a dune hugging the left edge provide the key contours and will allow canny shots to feed close to certain pin positions. It’s a genius short hole where the correct strategy might reveal itself only after you have played it a few times.

Shot-by-shot, hole-by-hole, a round at Cape Wickham builds to an incredible crescendo on the beach of Victoria Cove. The rocky shore alongside the testing par-4 16th and equally stern par-3 17th give way to sand on the dogleg par-4 18th, which calls for a drive from a dune top tee across the edge of the beach to a rolling fairway, set diagonally to your approach. The beach is in play, which makes your playing line decision all the more important … bite too much off the dogleg and you’ll be hitting your second shot from the beach.

It’s a brilliant closing hole on a course that is quite rightly gaining a global reputation for high quality design and presentation.